In this post, you’ll find out the major difference and upgrades released with Cordova 9, compared to Cordova 8. This includes major platform changes as well as how it affects (Cordova based) Ionic apps. This post is aimed to help developers migrate from Cordova 8.x to 9.0

TLDR; One major change for Ionic apps is that most of the Cordova plugins will now have to be updated to be compatible with Cordova 9.0.0

Why should you know this

Cordova 9 was released in March this year. It is a pretty big deal considering the already huge and growing community of Hybrid app developers on Cordova and Ionic. If you aren’t aware of Ionic framework, you can head over to Ionic website and check how awesome a framework it is. I’ll try to explain what Ionic is, in short.

Cordova enables developers to build applications for mobile devices using CSS3, HTML5, and JavaScript instead of relying on platform-specific APIs like those in Android, iOS, or Windows Phone. It extends the features of HTML and JavaScript to work with the device.

Ionic is actually another wrapper on top of Cordova. Cordova has the basic HTML/CSS/JS → Native capabilities, while Ionic powers neater and powerful layouts and overall app management on top of Cordova

Other than Ionic, Cordova also supports the following frameworks

Cordova is actually what allows a hybrid app to talk to native functionalities. Ionic is basically just a wrapper on top of Cordova. In other words, Ionic gives Cordova apps more structure in terms of JS framework (Angular, React), but the actual connection between HTML/JS code and Native functionalities is provided by Cordova.

E.g. If your Ionic (Angular based) app has a Camera functionality, the Camera of the device is able to talk to the hybrid app because of Cordova, not Ionic. Cordova Plugins are the bridge between the device native capabilities and hybrid apps. Perhaps this informative image will explain it better

So when Cordova version changes,

E.g. Recently, Android changed the folder structure of Android projects. Cordova followed it and changed the compiled Android project structure in the new Cordova version. But if you try to build an Android App with the latest SDK, and old Cordova, the resultant app might not work properly. So that’s how it goes in open source world — you need to stay up to date.

The major change for Ionic apps is that most of the Cordova plugins will now have to be updated to be compatible with Cordova 9.0.0

What has changed in Cordova 9

As a starter, following major packages have changed in Cordova 9.0

Following are some of the major changes in Cordova 9.0.0 you should be aware of

Use custom Gradle properties to read minSdkVersion value from config.xml

Before this release, users who want to modify the gradle.properties file in Cordova Android project would have to modify it directly but this is not the best case. Users may not commit their platform directory. This mean changes are lost each time they remove and add back a platform..

Android has migrated the ANDROID_HOME variable to ANDROID_SDK_ROOT. If you continue to use ANDROID_HOME, the following rules apply:

Cordova 9.0 now supports ANDROID_SDK_ROOT variable, so that future releases do not break because of deprecated behavior of ANDROID_HOME

Browsers don’t have the require method defined, but Node.js does. With Browserify you can write code that uses require in the same way that you would use it in Node.

Cordova 9.0.0 has removed support for browserify.

As you may be aware, package-lock.json is used to keep a log of installed modules and their dependencies. This file is generally committed to Git, so different members of a team can have same dependencies.

JAVA (JDK) has upgraded from 1.8 to v11, but still most of the users are using 1.8 itself (including me) because of the compatibility with Cordova. Recently, many projects starting seeing an error message to update to latest Java versions i.e. V11. But when you do update JAVA version, it results in another error. Apparently, this was because there is a syntactic difference in versioning. Earlier it was 1.8, from there it became v9, v10 and now v11. So the two digit version number started causing issues.

Cordova 9.0.0 has now fixed this, at least in the Android platform. The error messages now give out correct SDK download links, so user does not end up installing v11, and bang their head around on the walls. More info here

Along with this, now there is a check in Cordova to tell the user that only JAVA 1.8 will work with Cordova. So any JAVA version ≥ 9 will give this error which says “we need exactly Java 1.8”

This issue is now fixed in Cordova 9.0.0. Aforementioned plugins will not be affected by the folder structure issue anymore

Cordova 9.0.0 now defaults to a Gradle version > 4.6.0. This means you’ll need to update your Gradle version if you upgrade to Cordova 9. This update is in line with Android Gradle Plugin 3.2.0. Several other deprecation issues are also fixed in Cordova 9.0 🎉

This is a good news, considering with every Cordova version update, there used to be breaking changes for plugins. As I mentioned above, Android recently changed the folder structure, and hence Cordova did too. Cordova 9.0.0 has come up with a fix to increase compatibility of old plugins by adding ‘app/src/main’ to all plugin source-file tags that didn’t include it, so the files are copied to the new Android Studio structure. Pretty simple change, but can help developers a lot when using old plugins. (and also give plugin developers more time to make appropriate changes)

Fix for plugins that use non-Java source files, such as Camera

Cordova 9.0.0 has fixed an issue with plugins that used non-Java source files — when user removed and re-installed the plugin, the CLI gives error. Following is an example for Camera plugin. 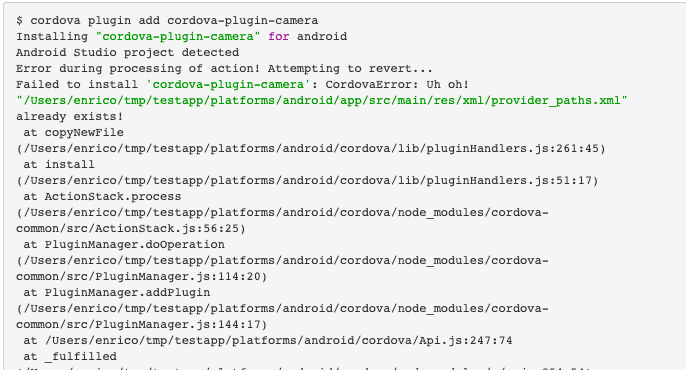 Now these plugins can be removed and installed again correctly.

Earlier, the MainActivity created from the template that adds support for starting the app in the background via the cdvStartInBackground flag didn’t fire the pause event.

Cordova 9.0.0 resolves the issue by caching a pendingPause when starting in the background, this manifests in the following events inside the app:

As a user you can then store a flag (e.g. app.inBackground) and this can be checked in deviceready handler.

Cordova 9.0.0 (cordova-ios 5.0.0) has made changes to correct the icon and splash names as per iOS convention. Minor change, but important!

A few issues had started to come in regarding the state of Cordova projects on Xcode 10. This is a rough summary of the situation:

Xcode 10 uses a new build system by default (previously available on an opt-in basis in Xcode 9). The cordova-ios project structure is not compatible with this new build system and results in failures. As of Sept, 2018, officially, Cordova did not claim to support Xcode 10.

An appropriate reaction from one developer

The best workaround was to opt-out of the new build system:

Cordova 9.0.0 has resolved this issue, and now cordova-ios structure should be compatible with XCode 10.

If you use the following preferences in config.xml, all the inputs type “text” stop working and are not clickable.

Cordova 9.0 has now fixed this issue. The config.xml preferences can be used without the input text side-effects

This happened when you copy text from a Native app e.g. Notes, and then try to paste it in a backgrounded cordova app. The text never gets pasted. This issue did not happen if the text is copied from a web interface.

Also once consumer app goes foreground, after backgrounding that app, clipboard text can never be pasted in any other iOS app with native UI.

This issue is resolved in cordova-ios 5.0.0. This was available a long time ago, but it is now default in Cordova 9.0.0

You saw some major changes in Cordova 9.0.0 i.e. Cordova-android 8.0.0 and cordova-ios 5.0.0. There are a lot of other minor changes in Cordova 9.0.0, but listing all of them here is not possible, and some of them are pretty harmless. Overall, in terms of plugin changes, the news is more on positive side. Several plugin issues have been fixed, and I personally look forward to more smoother iOS builds (but can’t trust Apple with more iOS changes 😑)

Now that you have learned the latest changes in Cordova 9.0.0, you can go ahead and create some awesome Ionic 4 apps. Some of my articles you can start with

If you need a base to start your next Ionic 4 app, you can make your next awesome app using Ionic 4 Full App. I have my own Ionic 4 template store at enappd.com. Feel free to visit and give your valuable feedback! 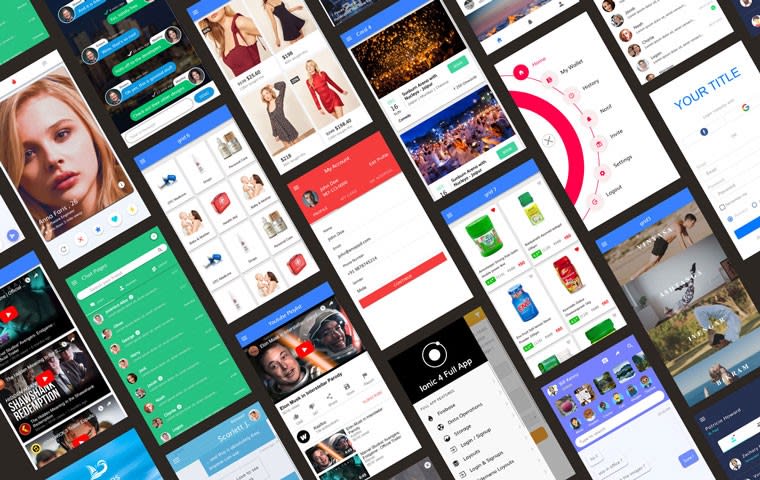 This blog was originally published on enappd.com.

Adding Facebook Login to your Ionic app (in 15 minutes)

How can I update PHP mongoDB extension in Ubuntu?