Gulp is one of the most popular and cross-platform streaming task runners that provide you all the tools and plugins to automate slow and repetitive development routines and workflows and compose them into efficient build pipelines. At a high level, gulp reads files as streams and pipes these streams to different tasks. The main part of the development with gulp is creating tasks using JavaScript. These tasks can use thousands of npm packages to perform different tasks. There are also other popular task runners such as Grunt and Webpack and Visual Studio has native support for these task runners. In this tutorial, we will use the latest version of Gulp 4.0 that is rewritten from the ground-up and will allow us to compose tasks using new series() and parallel() methods. There are also many more advancements added in version 4.0 and you can read about all the new features here. 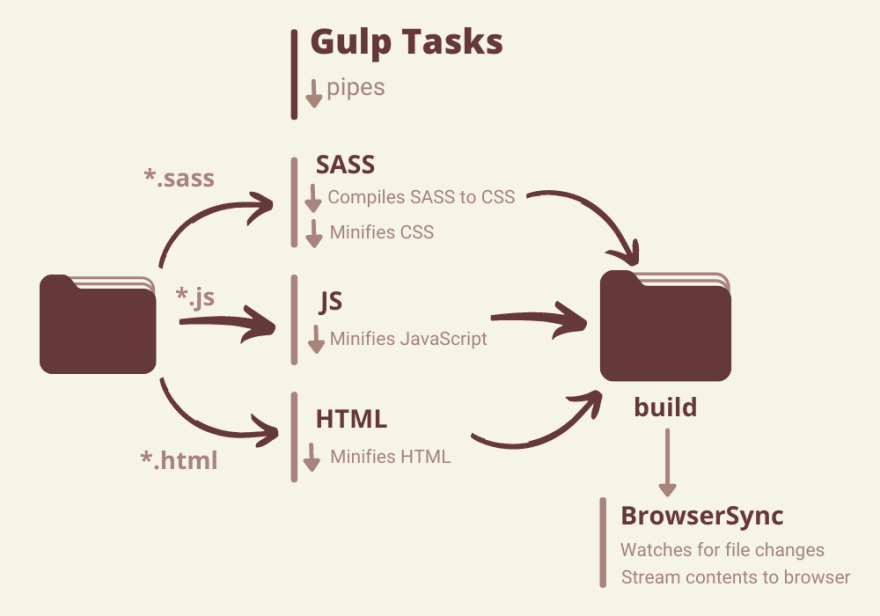 The gulp tasks we needed to perform bundling and minification are as follows:

We will use the following plugins to perform the above tasks.

There are thousands of plugins available to perform all types of routine tasks using gulp. You can search these plugins in npm packages repository. If you are not comfortable in using client-side packages and libraries, I will recommend you read my post Working with Packages and Libraries in ASP.NET Core

So far, we have learned that we need to define gulp tasks using JavaScript and we have to use different plugins to perform different routine tasks now the last question is where we will define these tasks. This is where Gulpfile.js comes in. A Gulpfile.js or gulpfile.js is a file in your project directory that automatically loads when we run the gulp command. In this file, we often define tasks and use gulp APIs like src(), dest(), series(), parallel() etc. We will also create this file shortly to define our gulp tasks. You can read more about this file here. 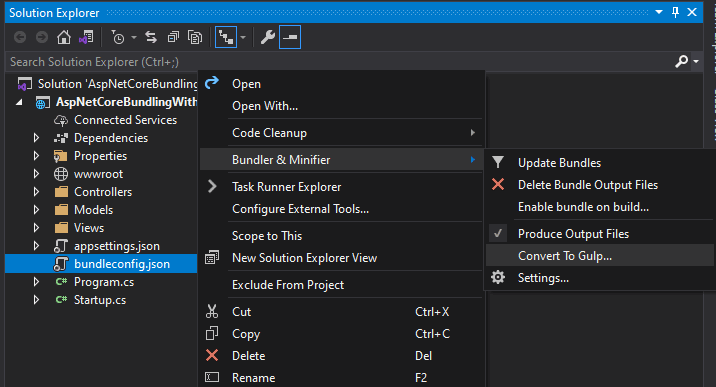 You will see the following confirmation message asking you about generating gulpfile.js and installing npm packages. You can press OK to proceed.

After few minutes of downloading, you will see the following new items in your solution explorer. 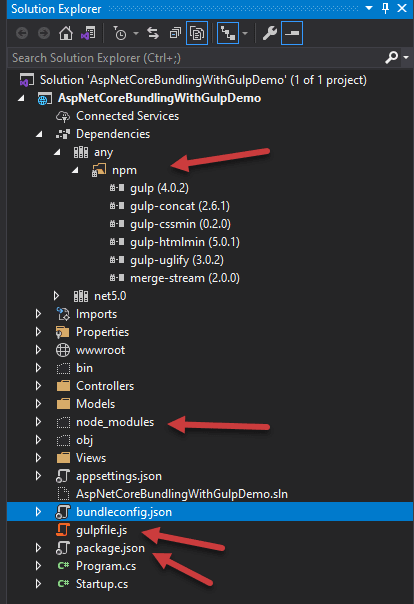 A package.json file is a JSON file that is normally available at the root of a project and it contains the metadata information related to the project. It is used to manage the project’s dependencies, scripts, versions, etc. If you will open the generated package.json file you will notice that it has project name, version, and some development related dependencies which are mainly npm packages we will use in gulpfile.js file shortly.

How to Define Tasks in Gulp

If you will open gulpfile.js, you will notice that the Bundler & Minifier extension has already generated all the gulp tasks for you. The problem with this generated code is that it is not using Gulp 4.0 even though the package.json file is showing gulp version 4.0.2 in it. This means you have two options now.

I have chosen option 2 above as it's always a good option to use the latest version of any tool or framework.

It is now time to update gulpfile.js and learn more about gulp. First of all, we need to specify/import all the required npm packages. These packages can be loaded either by path or name and each of them will be assigned to a variable. This is similar to importing NuGet packages in C# files while working on the server-side.

Next, we have a regex variable that will keep both css and js files regex which are used in getBundles function to filter and fetch files matching with a specific regex pattern.

Next, we need to define the ‘clean’ gulp task. The clean task will remove the existing minified files so that they can be regenerated with the updated code or functionality. Notice that the gulp tasks are simply JavaScript functions. We create JavaScript functions and then registered them by using gulp.task() method as we did with our clean function below.

To minify JavaScript files, I am creating minJs task. This task

To minify CSS files, I am creating minCss task. This task

Following is the complete gulpfile.js file with all the tasks

We are now ready to run our gulp tasks using Visual Studio. Open the Task Runner Explorer window and you will notice that it is reading Gulpfile.js and showing all gulp tasks. 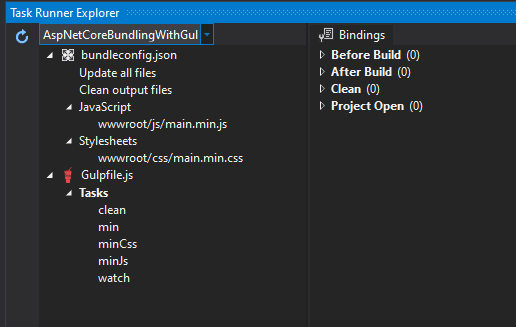 You will see that the main.min.css and main.min.js files will be generated in Solution Explorer. You can also run individual tasks to perform a specific function. For example, you can run the ‘clean’ task to delete the minified files. 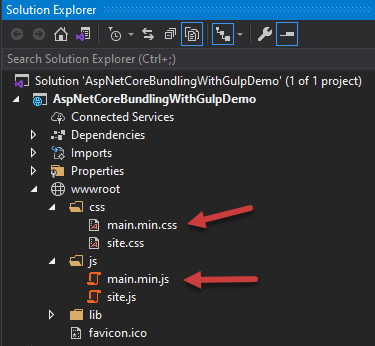 Running gulp tasks from Task Runner Explorer every time you make some changes in JavaScript of CSS files during development seems a non-productive method. You can automate this process by binding these tasks with certain Visual Studio events. You can

We can bind Gulp.js tasks with the following Visual Studio events:

To bind a task with an event, right-click on a task in Task Runner Explorer and choose any event from the child menu of the “Bindings” menu as shown below: 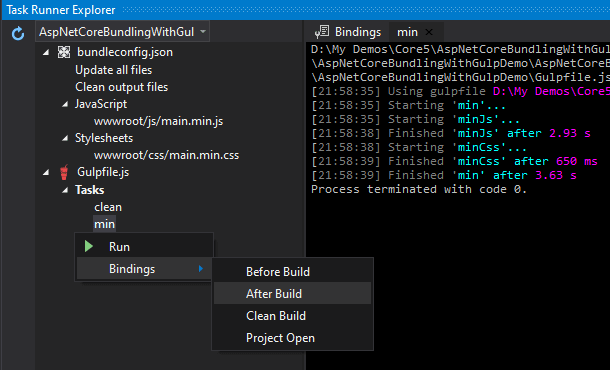 We can also define this binding directly in the gulpfile.js using the following syntax. The following line states that the 'min’ task should run when Visual Studio executes the AfterBuild event.

In this tutorial, I have shown you how to write and integrate Gulp tasks in Visual Studio to manage the Bundling and Minification of JavaScript and CSS files automatically. You can create all sorts of tasks by using thousands of modules available in the online npm repository. I hope you have learned something new in this tutorial and you will start doing more and more automation to make yourself more productive as a developer.

Reduce The 2FA'S Token Provider Length in ASP.NET Core Identity To 4 Digits Instead Of 6 Digits in .NET 7

Four lessons I learned after working with Hangfire

Once suspended, ezzylearning will not be able to comment or publish posts until their suspension is removed.

Once unsuspended, ezzylearning will be able to comment and publish posts again.

Once unpublished, all posts by ezzylearning will become hidden and only accessible to themselves.

If ezzylearning is not suspended, they can still re-publish their posts from their dashboard.

Once unpublished, this post will become invisible to the public and only accessible to EzzyLearning.net.

Thanks for keeping DEV Community 👩‍💻👨‍💻 safe. Here is what you can do to flag ezzylearning:

Unflagging ezzylearning will restore default visibility to their posts.