When the pandemic started me and other friends are looking for a game to play online. One of the games we found was https://pyx-1.pretendyoure.xyz/zy/game.jsp which is a Cards Against Humanity clone written in Java. They did a really good job of implementing features like being able to pick card packs you want & in-game chat feature. The problem is that it's not mobile friendly so you'll have to play it through the desktop view.

I've been using this programming language called Elixir at my job and figured that it might be a good idea to write a CAH clone using it. So i created Leafblower 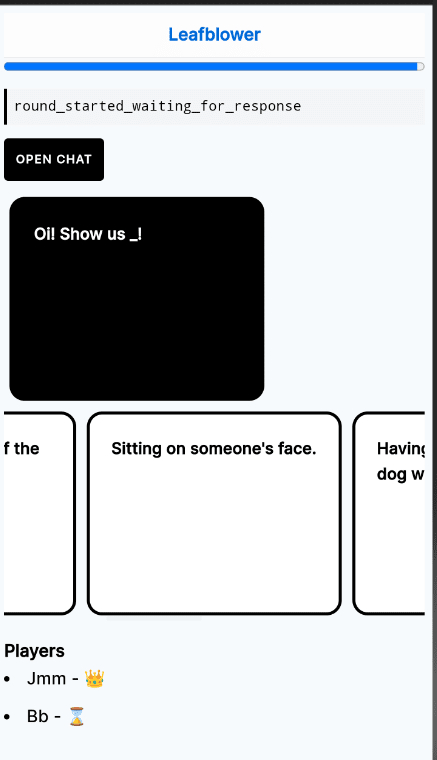 It has the following features

It all starts by generating a game code. We call GameStatem.generate_game_code/1 to find an unused game code first. Then we call GameSupervisor.new_game to start a game

When the GameSupervisor.new_game/1 is called it will start 2 process:

The GameStatem is where most of the magic happens. If you look at the file, you'll see the status and data typesecs

When the game is started, the default status will be :waiting_for_players. This will change as the game progresses. The controller sends messages to the GameStatem process and it will broadcast any changes to its state and data through an internal handle_event callback

I had extreme fun building this game. Getting feedback from my friends who played was also very helpful. I hope you enjoy as well!

What is ISO 9001 Certification? How to Get Certified (For Beginners)

Once suspended, fmterrorf will not be able to comment or publish posts until their suspension is removed.

Once unsuspended, fmterrorf will be able to comment and publish posts again.

Once unpublished, all posts by fmterrorf will become hidden and only accessible to themselves.

If fmterrorf is not suspended, they can still re-publish their posts from their dashboard.

Once unpublished, this post will become invisible to the public and only accessible to Daven.

Thanks for keeping DEV Community 👩‍💻👨‍💻 safe. Here is what you can do to flag fmterrorf:

Unflagging fmterrorf will restore default visibility to their posts.