After tweeting out a screenshot, it often get questions around which editor, font or color scheme I'm using. Instead of replying to those questions individually I've decided to just write down the settings and apps that I'm using.

I mainly program PHP. Mostly I develop in PhpStorm. Here's a screenshot of it: 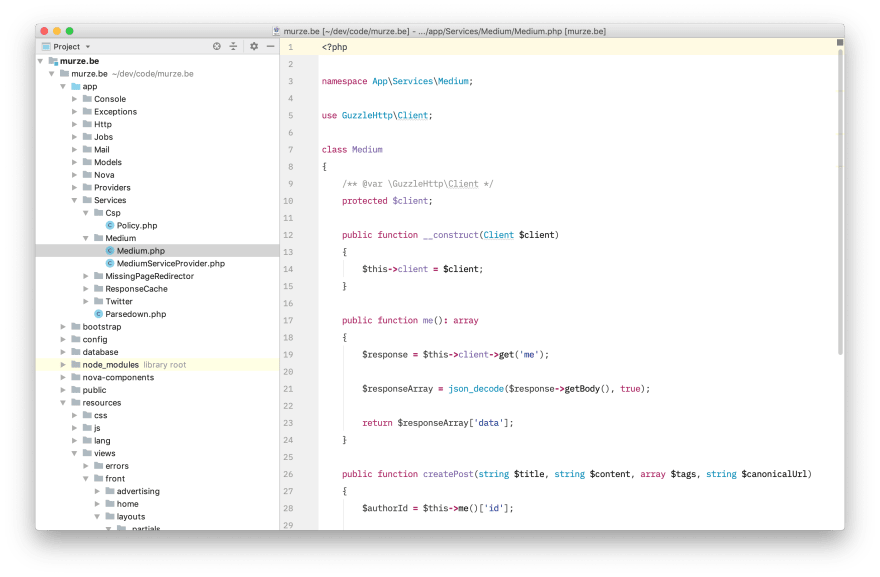 You can find the color scheme that I'm using in this repo. The font used is IBM Plex Mono: an awesome font that you can download for free in the official IBM repo.

Like seen in the screenshot I've hidden a lot of things of the UI of PhpStorm. I like to keep it minimal. I use the settings sync feature of PhpStorm to backup my settings to this repo on GitHub.

Here's a screenshot from my terminal. 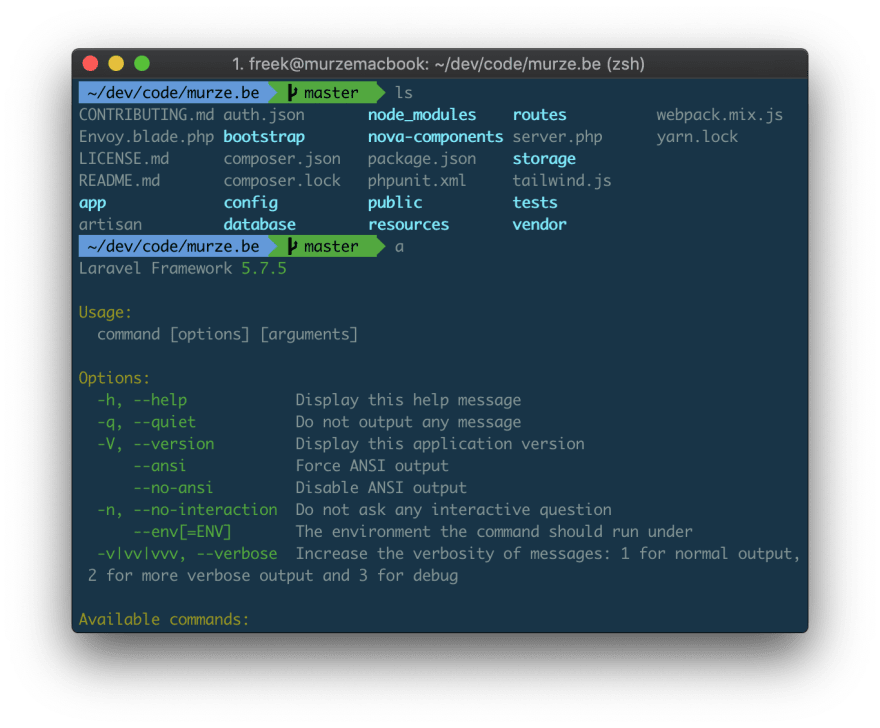 All my terminal settings are saved in my dotfiles repository. If you want the same environment you follow the installation instructions of the repo.

My terminal of choice is iTerm2. I'm using the Z shell and Oh My Zsh.

The color scheme used is a slightly modified version of Solarized Dark. The font used is a patched version of Menlo. I'm using several hand crafted aliases and functions.

I'm a day one upgrader of MacOS, so I'm always using the latest version. I also sometimes dare to use beta versions of MacOS when people are saying it's stable enough.

By default I hide the menu bar and dock. I like to keep my desktop ultra clean, even hard disks aren't allowed to be displayed there. On my dock there aren't any sticky programs. Only apps that are running are on there. I only have a stacks to Downloads and Desktop permanently on there. Here's a screenshot where I've deliberately moved my pointer down so the dock is shown. 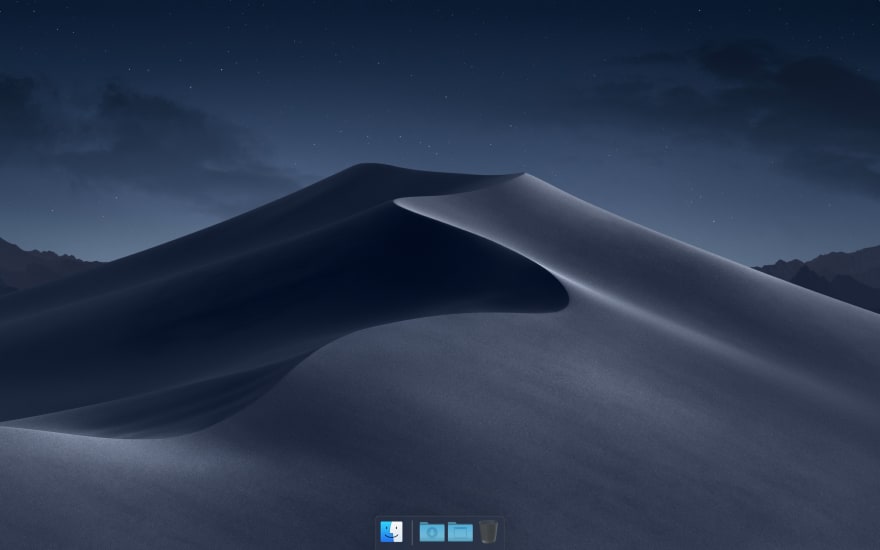 I've also hidden the indicator for running apps (that dot underneath each app), because if it's on my dock it's running.

In my dotfiles repo you'll find my custom MacOS settings.

These are some of the apps I'm using:

Here's a screenshot of my current homescreen.

I don't use folders and try to keep the number of installed apps to a minimum. Most of my time is spent in Safari, Pocket, Reeder and Tweetbot. Notifications and notification badges are turned off for all apps except Messages.

Here's a rundown of some of the apps currently on the homescreen: 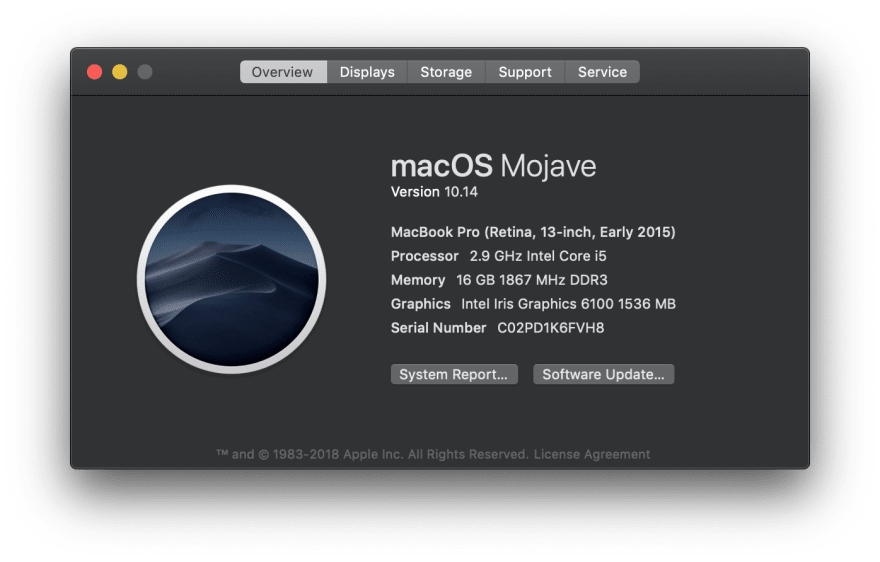 I'm using a Macbook Pro 13" with 16GB of RAM and 1TB hard disk. I opted for that big hard disk to be able to store my entire music and photos collection on the drive. Now that iTunes Music and Photos services are here, I probably would pick a smaller HD if I were to buy a new machine today.

Both at home and at the office I have these:

At home I play music on a HomePod stereo pair. To stay in "the zone" when commuting and at the office I put on my QuietComfort 35 wireless headphones.

My current phone is an iPhone Xs Max with 64 GB of storage.

I hope you enjoyed this little overview of the stuff I'm using. I plan on writing a post like this every year.

If you have any questions on any of these apps and services, feel free to ask them in the comments below.

IINA : The modern media player for macOS with Picture-in-Picture mode and Browser Extension

This CLI Tools for Monitoring like a Pro with Glances, Ctop, LazyDocker and Ncdu

Freek Van der Herten
PHP developer and package creator at Spatie
Introducing Holopin: the digital badge platform for developers!
#hacktoberfest #opensource #career #news
What are your Favorite Authors, on Which Topics, and Why?
#discuss #writing #watercooler #gratitude
Why I am not getting good at Programming?!!
#beginners #career #discuss #writing

Once suspended, freekmurze will not be able to comment or publish posts until their suspension is removed.

Once unsuspended, freekmurze will be able to comment and publish posts again.

Once unpublished, all posts by freekmurze will become hidden and only accessible to themselves.

If freekmurze is not suspended, they can still re-publish their posts from their dashboard.

Once unpublished, this post will become invisible to the public and only accessible to Freek Van der Herten.

Thanks for keeping DEV Community 👩‍💻👨‍💻 safe. Here is what you can do to flag freekmurze:

Unflagging freekmurze will restore default visibility to their posts.