When you hire a dedicated app developer to build an app for a project, it’s important to choose a flexible, cost-effective and robust platform. Ionic Framework is one such a reliable framework that allows you to develop an app for all platforms. The guide to the Ionic mobile app development will allow the developers to build one for their project. It also helps the mobile app owners to take better decision before winding up the process to hire Ionic app developers.

Why Should You Use Ionic Framework For An Ionic App Development?

A brief introduction to the Ionic framework will allow you to easily comprehend its advantage for development.

A free and open-source platform that permits you to build a mobile app using web technologies. You can also call the Ionic framework as a front-end UI framework that handles the look of your app responsible to interact with the customers. Its components help in building highly beautiful, interactive, native as well as progressive web apps.

The Ionic Themes consists of pretty and flexible components that are easy to integrate. Ionic buttons, forms, ionic cards, images, and whatnot are available to decorate an app.

Not just aesthetics, an app must have attributes like sensible project structure, navigational services, dependency injection, data binding, and remote data access. Hire Ionic developer to build a perfect Ionic mobile app for your business with the help of these attributes.

But, if you are a beginner Ionic app developer, it will be beneficial to note them. The things that we will cover when building a mobile app are:

What Are The Project Architecture Of the Ionic Development?

The process of project structure to app’s architecture consists of a wide variety of components, services, directories, and attributes.

The raw and uncompiled raw in Ionic is present in the src directory. When the Ionic server is run, the code gets transpiled from the src directory to the correct JavaScript version. This depicts that the process undergoes a higher level using TypeScript but compiles down in the polder form of JavaScript of the browser needs.

Within the src directory, you shall find the folders like app, assets, pages, services, and themes.

The app folder constitutes of:

The page folder of the src directory constitutes of more than on folders within:

The Service Folder functions as the name suggests. Services are used to access the data to be presented within the app. There can be two different kinds - one that interacts with remote backend API and other interacts with local JSON.

The asset folder may save all the images as well as other assets used in the apps. The data layer can be simplified in some parts of the apps by creating a JSON file with simple data.

Navigation in Ionic apps works as a simple stack, where new pages are pushed onto the top of the old stack. To move forward in the app stacking over and over is made, when the top is popped out of the page you can navigate backward.

You can set "this.navCtrl" in the constructor to “this.navCtrl.push()” to pass it to the age you want to navigate. Ionic’s navigational system is flexible and using push to navigate you can easily move to a new page. 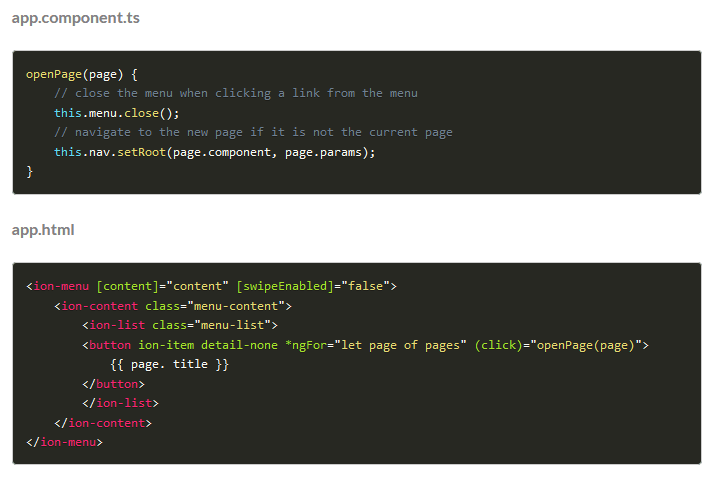 The type and amount of data representation must be taken into account when using the navigation feature. Because you must never forget that navigation is used to show the structure of the data, thus, it must necessarily follow an information structure.

Other Navigation For UX In Ionic App Development

The type and amount of data representation must be taken into account when using the navigation feature. Because you must never forget that navigation is used to show the structure of the data, thus, it must necessarily follow an information structure. Enabling best practices allows people to find and use the most valuable features of the app easily. Good navigation is like a good design. The navigation patterns are classified into two - Primary and Secondary navigation patterns.

Improvising The Design Of The Ionic Mobile Application

Since the Ionic framework is used for developing high-level mobile apps with the help of building blocks, components. Components allow quick development of interface of the app inclusive of modals, pop-ups, and cards. The Ionic UI elements are reusable made up of HTML, CSS, and Javascript.

Here is a shortlist of the UI components:

However, there is a full library of UI components that Ionic has that any mobile app developer can use easily. There are many other functionalities that Ionic offers:

A powerful mobile-first flexbox system is available in the Ionic framework for developing custom layouts. The grid comprises three units - a grid, row and a column. The number of columns and breakpoints can be fully customized using Saas.

Sass is just similar to CSS that is powerful and goes hand in hand with Ionic. You can easily use Sass variables multiple times once defined value. For instance, to define the main color in the app, you can create a variable "$ main-colour: red;"

To enable your app to support multi-directional needs, you can use some built-in mixins in the Ionic Framework. Ionic offers full LTR and RTL support for multilingual addresses.

The designer team of Ionic are creative heads like others and understands the need for icons in app development. Thus, the team builds incredibly beautiful and free icons for the Ionic app developers for making apps look pretty.

There are many ways data could be handled and consumed. With Ionic Framework, you are given full freedom to implement the backend your way. For this, Ionic encourages the utility of some models with a combination of services.

The concept of "Dependency Injection" is an important app design pattern. Since Angular has its own DI (Dependency Injector ) framework - this improves the efficiency and modularity of an app.

The need for the class to perform its function is dependencies. Also referred to as a coding pattern where service is sought from the external sources rather than creating them. DI in Angular not only makes an app efficient but flexible, robust, testable and easily maintainable.

As per the Angular Documentation page for dependency injection, there are ways to register a Service Provider:

Who wouldn’t want a robust, flexible, easily navigable, aesthetic as well as efficient mobile app? But, developing one from scratch can sometimes be overwhelmingly frustrating. A free open-source platform, Ionic Framework which is mostly built on Angular enables the web and app developers to develop highly-interactive and aesthetic yet functional native and progressive web apps.

Ionic not only empowers to hire app developers to build extensive apps but offers templates like Wordpress integration, examples of how to use Google Map, Google Places and Geolocation, Video Playlists, Image Management, Social Logins, Internationalization and much more.

The benefit of using Ionic framework is that it leverages easy building of extensive mobile applications. It also assists the developers and software industry to deliver high-quality products. Moreover, it empowers people with tools and services to develop new skills and make a better living.

What is End-to-End Testing?

JavaScript: What the **** is Recursion?

Gaurav Goyal
I am Gaurav, interested to share the trends on the latest technologies. I do like helping developers to get them aware of frameworks.
Fresh – Is this new Javascript framework the Node-killer?
#discuss #javascript #deno #webdev
THE LIVING EMOJI
#beginners #discuss #css #javascript
My Current GitHub Profile
#github #showdev #career #discuss

Once suspended, goyalgaurav6 will not be able to comment or publish posts until their suspension is removed.

Once unsuspended, goyalgaurav6 will be able to comment and publish posts again.

Once unpublished, all posts by goyalgaurav6 will become hidden and only accessible to themselves.

If goyalgaurav6 is not suspended, they can still re-publish their posts from their dashboard.

Once unpublished, this post will become invisible to the public and only accessible to Gaurav Goyal.