On Wednesday, December 17th 2020, I received some exciting news that I was selected to be an Apprentice Software Engineer at Twitter. I was super excited about the news. To be quite honest, it still hasn't processed in my mind yet. At least until my official Twitter merch arrives in the mail :) and my start date gets closer. This was a tedious and long process, and I enjoyed every bit of it and talking to the future team members. But I'd like to share my story on how I even got up to this point.

First off, hello, the name is Naya Willis. I'm a truck driver in Queens, NY. I've been driving trucks for a few years now. I started coding at 21 years old. I'm 29 now. Back in 2010-2012 I was attending Queensborough Community college. I majored in Mechanical Engineering. A little into that degree program I realized that it wasn't really for me. I knew that I wanted to do something engineering wise, but not Mechanical Engineering. I for one love challenges, and Mechanical Engineering just didn't seem challenging enough. Not to mention, I was young and wasn't taking things too seriously back then. I never completed Queensborough Community College. It turned out college just isn't for everyone.

A few weeks after this realization, I was walking home from school one day, and I couldn't tell you what made me walk into a Barnes and Nobles book store. I felt as if some entity took over me like "Watch out, I got this!". So I walk into the store and ask a representative about their books on computer programming, since I initially started doing some research about it at home. She directed me downstairs. I searched through the books in the computer section and came across a C++ Programming For Dummies book. I thought that that book was the holy grail of programming and had everything that I needed to know in it. Who was I kidding? I later found out that it was just a language and not programming and it's entirety. This led me down a rabbit hole in search for more and more information.

I later found a book on Amazon titled Beginning Programming For Dummies, 7 Books in 1. This was it! My whole Software Engineering journey really took off with this book. 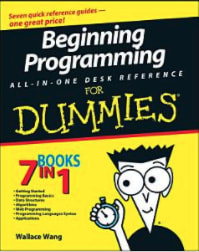 This book shed light on so many programming topics. It actually became the passenger in the truck that I drive for work. At work I had a lot of downtime and would sit in the truck with that book and start highlighting text like crazy. Although, this slightly proved to be ineffective as I wasn't really able to immediately apply what I've been learning. At that point I was forcing myself to retain information. It wasn't like I could use my laptop on the truck. I eventually found my footing, and started prioritizing programming more than other things. I would get home from work and do further research on my laptop, practice some coding problems, you know? The whole shebang. I touched upon many different technologies back then. I actually fell in love with Python, and Javascript. I even dabbled a bit in Java at one point.

Fast forward to 2019, years later, I thought to myself that I wanted to make a career out of this. All of those years of just being a newbie had to come to an end. That's where Flatiron Coding Bootcamp comes in. I joined the September 9 2019 cohort. There I learned how to become a more focused developer. I've become more structured, and welcomed the accountability. This stuff isn't a walk in the park as you can imagine. I graduated in July 2020. From that point on it was just continuous learning and sharpening my skills. I found it most helpful to do website clones and whatnot. It helped me tremendously. I even did a Twitter Clone, go figure. And then there was the job search.

Some time into the job search process a friend of mine named Chaya (who I thank so much for telling me about this Twitter Apprenticeship program) said that I should apply. So, I did. She and some other classmates and I got together to tackle algorithms to prepare for it, and it went pretty well. Before I landed this Twitter Software Engineer Apprentice role I applied to at least 100 plus jobs. It was no fun at all, and even with rejection after rejection I didn’t give up. I most certainly wasn't going to just take any job. I had to really feel passionate about it. I always wanted to be involved in the development of a social media platform because I feel that there will always be new features to work on and new technologies to learn, which will feed my creative nature.

The whole interview process took about a month. I had a very pleasant experience and I’m grateful to have met some of the kind and friendly tweeps so far. After a few interviews and not so long wait periods in between them the anxiety and anticipation came to an end. I received an email from my recruiter that I’ve been selected and extended an offer for a Twitter Software Engineering Apprentice. At the time of this writing it still feels surreal, but I know it will eventually fade away as the date that I start gets closer. I’m excited to embark on this journey to further solidify my knowledge about programming and learning from the other brilliant individuals at Twitter.

In case anyone is interested, the next Apprenticeship program is scheduled for April 2021. Keep an eye out for that. Here is the link to find out more information about it.

Add me on LinkedIn Naya Willis

How to Hire Dedicated Shopify Developers for Your Business

Algorithms Every Programmer Must know