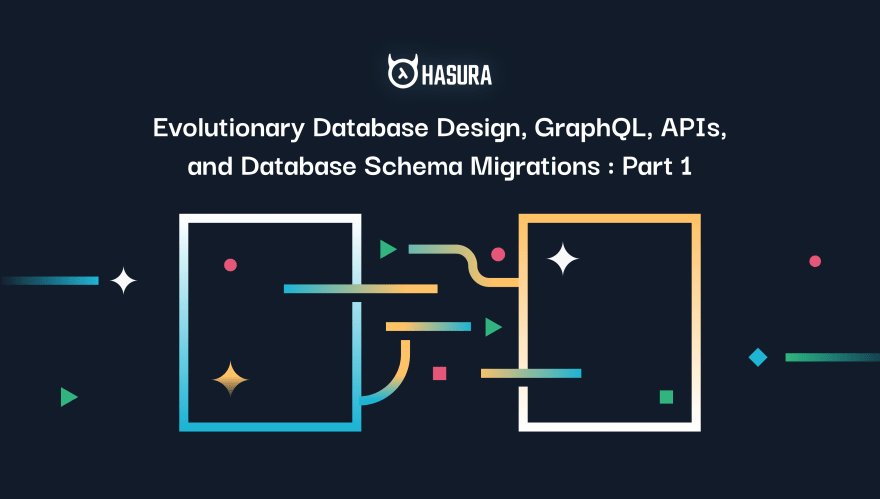 As a recent joiner to the Hasura team, I find myself learning, and exploring, GraphQL through the lens of my prior experience. As I delve into the technology more deeply, I find it intriguing to explore the amazing things we are building through my full stack and database background.

In this series, I am going to share my point-of-view on Evolutionary Database Design, GraphQL, and schema migrations. I have begun exploring this topic in a livestream of which the first VOD (Video on Demand) is available in “Database Migrations: Patterns and Best Practices”.

Evolutionary Database Design is a practice that has been around for a long time and can be applied to any database storage medium. It could be a fancy pants NoSQL database like Apache Cassandra, Mongo, Neo4j, one of a gazillion relational databases like Postgres, mysql, Maria DB, SQL Server, DB2, or the ole' Oracle DB. Whichever database, Evolutionary Database Design -- both in concept and practice -- seeks to help with several key requirements for any database:

Check out the references at the end of this blog entry for further material to read about Evolutionary Database Design.

My 2 Cents on Evolutionary Database Design

With some of the hostility towards Agile (upper case), agile (lower case), scrum, and some of the ideas often mentioned along with Evolutionary Database design it is extremely important to not conflate this practice and pattern of development with those ideas and practices. There is no tight coupling between these things, Evolutionary Database Design, Database Schema Migrations, and related practices around database development and refactoring are not tightly coupled, they stand on their own and respectively can be used as such.

With that stated, it is important to note that this design acumen and practice around managing one's databases, their development, and the respective APIs and application development related to those databases is extremely effective. It's going on 20 plus years and is still a trusted and liked practice to keep development in an always known state. It folds well into modern mindsets of development as well as new infrastructure capabilities and development ideas such as Infrastructure as Code (IaC).

Many of the relational databases have a plethora of options focused around accessing and managing data in a database. Very specifically relational databases like Postgres, SQL Server, Mysql, Oracle, and the like. These could be Object Relationship Mappers, or ORMs, Active Record, or a number of other patterns. A modern approach that has risen from all of these various patterns is to use GraphQL via an API as the access pattern over whatever the database is. One can implement a GraphQL Server themselves, per spec, over whatever data source they have, and there are many options that are built that offer server capabilities via API (Apollo, Hasura, and others).

With the advent of this layer, where GraphQL is provided via API access, there is a need to manage the metadata and API schema of the system along with any database schema itself. What this manifests as, when working with an evolutionary database design practice, is to work with the API as if it is the database itself. This way during development one would iterate on the API and the respective schema of the API in conjunction with the database versioning done with the schema migrations. With each solution one might have to build custom tooling to do this, but in this post as I move into examples of process and flow around database schema migration I'll be using the Hasura CLI. This CLI gives us prebuilt capabilities to keep the API schema and database schema in versioned synchronization.

Enough theory and ideas, let's talk about some real examples.

In upcoming posts, I will work through two discrete scenarios. One building on the other. The first is a scenario in which a green field application, just getting started, needs to be initialized and set up for schema migrations. There are two primary examples that I've provided in the following: using the user interface to build out or start the initial schema migration, and a secondary option to build all elements of the schema migration process manually. Both of these options use the Hasura CLI to cover metadata and related collateral for organizing the iteration, version, and folder structure creation.

Aurora, Where Is My Data? Extreme IOPS Optimization for MySQL

How To Get Current Month Records In MySQL Query