Serverless still means you’re using servers but you’re not provisioning and managing those servers yourself but instead these servers are running in the cloud provided by a provider like AWS, Azure, or Google Cloud. They dynamically allocate resources for executing a piece of code (function) and only charge for the number of resources being used to execute that code. Most of the time your code is being run inside a stateless container that can be triggered by events like an HTTP request, database events, file uploads, or CRON jobs. A stateless container means that you can’t rely on other functions executing before or after your own function, everything is done inside that one function in a new container every time. Everything will become a single little service (Microservice) which can also be called FaaS (Functions as a Service).

Some popular serverless technologies include Google’s firebase, some AWS services, some azure services, and serverless (https://www.serverless.com) where serverless isn’t necessarily a service in itself but a popular tool to develop, deploy and monitor serverless applications to cloud providers. This time we will be focusing on the AWS serverless services.

You can easily create lambda functions by logging in to the AWS console and going to the lambda section. From there you can click the create function and create your first function! 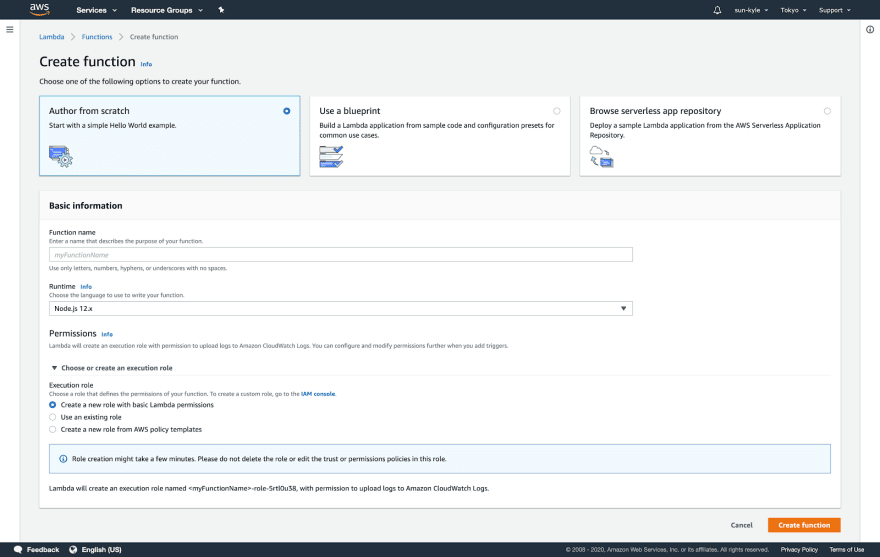 For now, we will start by creating a function from scratch with NodeJS you can choose any name you like and for now you can select the option: “Create a new role with basic Lambda permissions” but for additional function, it’s advisable to create one general role, if the permissions stay the same, and select that one for all your functions. 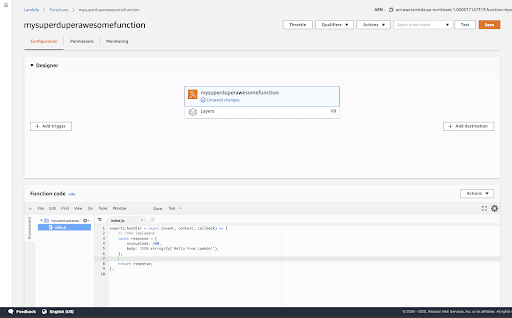 The event object contains the information about the event that triggered the function, the context object contains information about the runtime in which the lambda is being executed. The response contains the response we want to send back with the status code and body in JSON format. In non-async functions, there is a third parameter you can call to send a response. When you call that callback, Lambda will wait for the event to finish and then return the response or, if something went wrong, an error.

Lastly, If you want to test your function you can create a test event on the top left and execute your function inside the console and see if everything works! 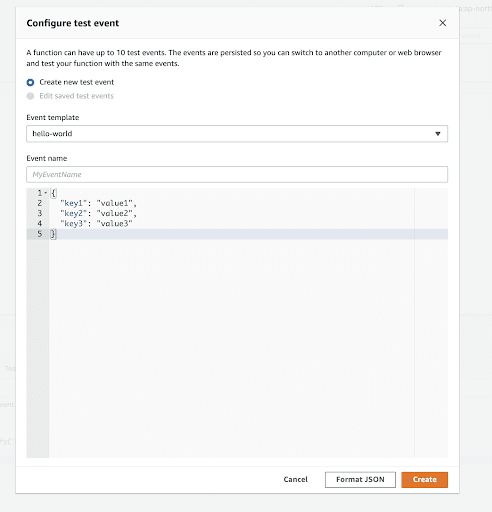 Going back to our freshly created Lambda function we’re going to add a trigger by clicking the “add trigger” button on the left and selecting “API gateway” in the popped up window. 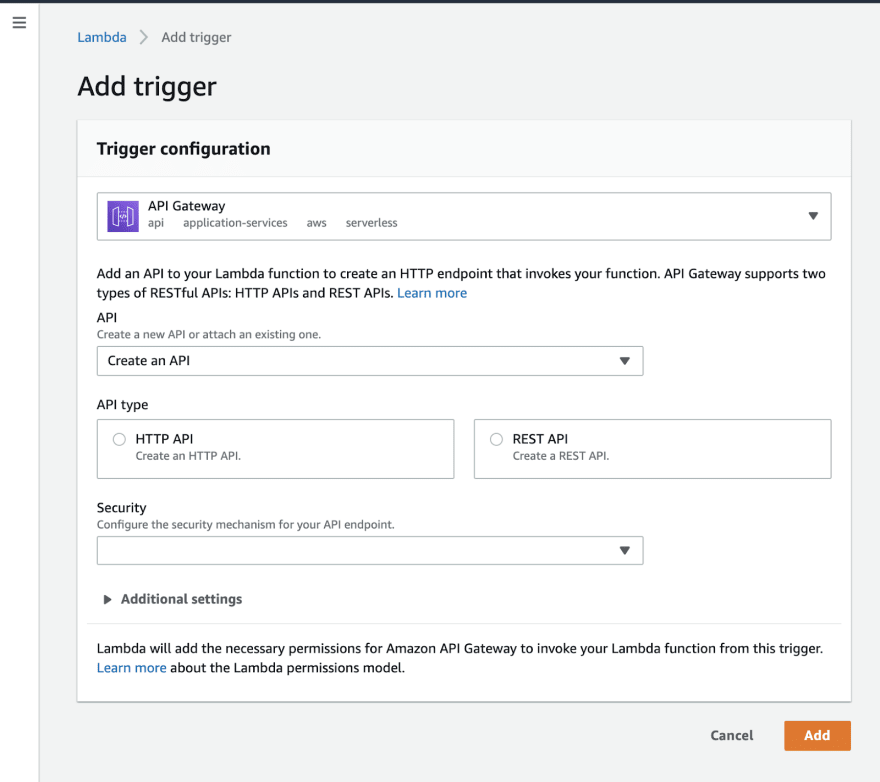 We’re going to create a “REST API” with no security for now so we can select “open” clicking the add button will automatically create our API and our method inside our API. Going to the API gateway page we can test, check, rename, change settings, etc.

A few tips: Every time you make a change to a method you need to deploy your API again otherwise it won’t reflect the new changes, it has a very useful test feature built-in, you might need to set up CORS (can be easily done on the above page).

Amazon DynamoDB is a simple scalable NoSQL database commonly used with lambda functions. It can be easily used inside a lambda function to store, retrieve, update, or delete data. It’s very straightforward so I won’t be going into too many details this time but here is a usage example:

It's a simple function with the addition of the call to a DynamoDB table. on error an error response is returned and if the data is successfully retrieved that data is returned.

Of Course, you need to create a DynamoDB table which can be easily done by going to the DynamoDB service in your console and clicking in the create table button. You only have to specify a table name and primary key to create a table.

In general, you can also manage all the infrastructure/functions (ex. serverless or AWS SAM) with the help of CLI tools and infrastructure as code which is advisable multiple reasons including but not limited to maintenance, simplicity, and with being able to run functions locally.

Once suspended, hazardoushenkie will not be able to comment or publish posts until their suspension is removed.

Once unsuspended, hazardoushenkie will be able to comment and publish posts again.

Once unpublished, all posts by hazardoushenkie will become hidden and only accessible to themselves.

If hazardoushenkie is not suspended, they can still re-publish their posts from their dashboard.

Once unpublished, this post will become invisible to the public and only accessible to Kyle.

Thanks for keeping DEV Community 👩‍💻👨‍💻 safe. Here is what you can do to flag hazardoushenkie:

Unflagging hazardoushenkie will restore default visibility to their posts.