This article was originally written by Milap Neupane on the Honeybadger Developer Blog.

Before we release our software to the end-users, we perform different kinds of tests to ensure that the application is bug-free and meets business requirements. Although we do a lot of testing, we cannot be sure the software is stable without users actually using it. After end-users start using the application, various things can cause the application to not behave as we expect, for some of the following reasons:

For large-scale applications, these things are very crucial to know before a full-fledged release. To ensure that our application works as expected, we need to consider a few things while rolling out its functionality:

What Is Load Testing, and How Is It Different From Performance Testing?

The following three terms may sound similar, but they are different:

Why Is Performance Testing Important?

On one of the Rails projects, we were anticipating a lot of growth in users in the near future. We wanted to ensure that the application performed as expected, and crucial functionality was not lost with the increased number of users. So, how do we ensure this? We performed a load test and checked whether the application could handle the given increase in users.
Performance testing can be important in many other cases:

JMeter is an Apache 2.0-licensed open-source load testing tool. It provides thread-based load testing. With thread-based testing, we can easily simulate the stress our system would be under when a lot of users use our application simultaneously. JMeter also provides good reporting of the test results.

We will look into how we can use Apache JMeter to perform load tests to identify potential issues with the system and the response time of our application by simulating a lot of users using our system.

JMeter can be downloaded from the following link: http://jmeter.apache.org/download_jmeter.cgi#binaries

Some JMeter Terminologies To Be Familiar With

To run a load test, we need to first create a JMX file where we define the above-described JMeter terminologies.

Preparing a JMX File for a Load Test

JMX is a JMeter project file written in XML format. Writing a JMX file manually can be difficult, so we will use the JMeter interface to create the file. 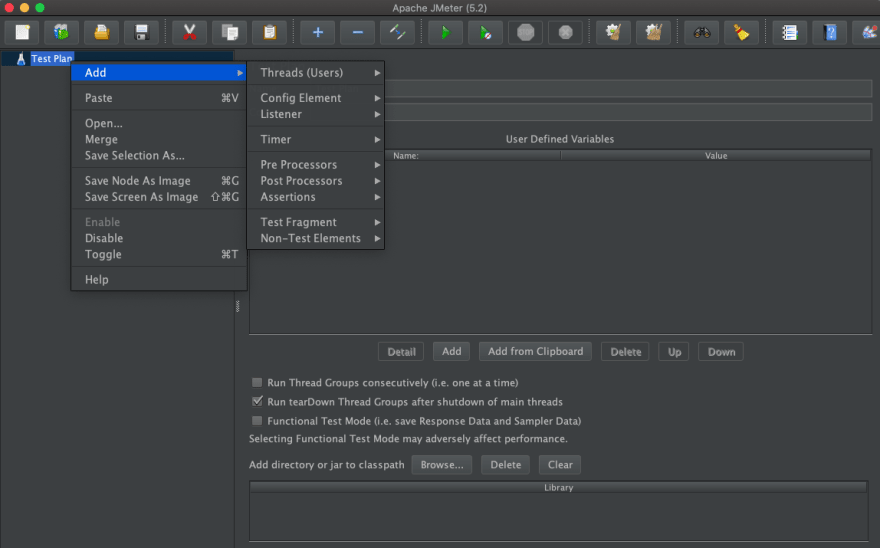 The test plan can be renamed according to what we are load testing for. We can configure a thread group(Users). You can keep the default settings here and move on to create the threads group.

In the thread group, by default, there will be a single thread specified. Change the number as needed to simulate the number of users accessing the app.

Since we will load test a web-based Rails app, we will add an HTTP sampler. We can add a sampler, which will be inside a ThreadGroup. Add an HTTP Sampler by navigating the following:

Here, we configure the IP or the domain that we are load testing on and the HTTP method and any request body required for the HTTP endpoint.

Finally, to view the report of the load test, we can add a listener to the thread group.

The view result tree will display the response time of each thread. We can add other kinds of reports here as well. 'View result tree' should only be used for debugging proposes and not for actual testing.

In this way, we can create a simple test plan and execute it. Simply hit the play icon in the top bar of the JMeter to execute the test.

Things to Consider Before Load Testing a Rails App

The above example is a very simple, single endpoint HTTP request. In the case of our Rails app, the endpoints we want to test are locked with authentication. Therefore, we need to ensure that we have the following things in place:

Rails CSRF Token can be fetched in JMeter by using a post-processor. Right-click on the HTTP Request that loads the web page containing the CSRF token, and then select Add -> Post Processor -> Regular Expression Extractor. Here, you can add the following regular expression extractor configs to read the CSRF value from the header meta tag:

Now, the variable csrf_value can be used to make the request.

Recording Requests From the Browser to Create a JMX File

With fewer HTTP endpoints, it can be simple to create a JMX file from the JMeter interface. However, for a larger test case, this can be difficult. Also, there is a chance we could miss actual requests made while a user uses the application. We want the actual requests made from the browser to be recorded and the JMX file created automatically.

JMeter can be added as a proxy between the Rails app and browser. With this, all the requests will be forwarded to the Rails server by JMeter. This is also called a MITM(man in the middle) attack. 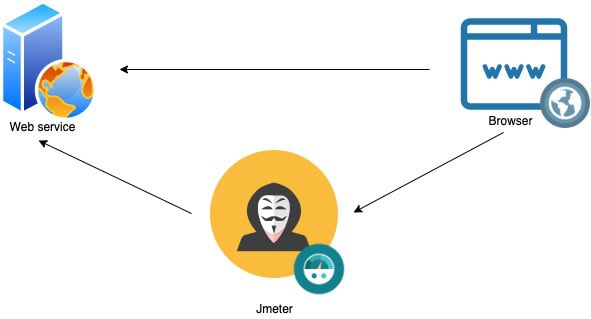 To create a recording in JMeter, go to file -> templates -> recording and click create. Specify the hostname you are recording. This will automatically generate a few things for you, including the cookie manager. The cookie manager will save the cookie required for authentication.

Configure Firefox to Use JMeter as Aa Proxy

Next, we need to forward the request from Firefox to our JMeter recording script. This can be done by configuring the proxy in Firefox. Open Firefox and go to Preferences -> Advanced -> Connection(settings). Here, set the HTTP Proxy to "localhost" and the port to "8080" and check "Use this proxy server for all protocols".

Now, we can go to JMeter and the Script recording section from the template we chose earlier. Once we hit the start button, JMeter begins accepting the incoming requests. When we go to Firefox and browse the application we are load testing, this will record and convert it to a JMX file, which we can run for load testing.

While running the test, we can perform a test from one of our local machines. Doing this is okay when preparing the test plan, but when running the actual test, we need to change it. Performing load tests on a single machine will have hardware limitations (i.e., CPU and memory) and request location limitations. These tests are run to simulate the traffic of actual users using the application. For this purpose, we need to distribute the tests to different servers and have a single place to view all the results.

JMeter provides a primary node for orchestrating the test and multiple secondary nodes for running the test. This helps to simulate real users using the application. We can distribute the testing servers to different regions close to our actual users. 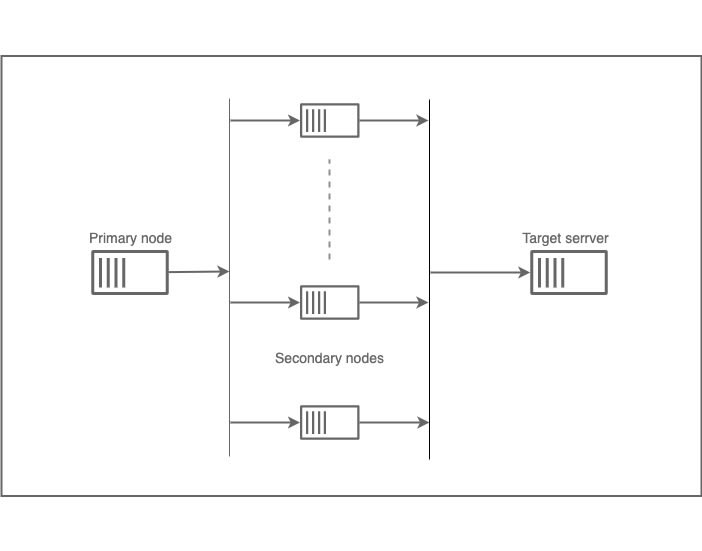 To perform a distributed test, begin by installing JMeter on both the primary and secondary servers.

Things to do on the secondary server:

Things to do on the primary server:

To perform the load testing, we should always use the CLI command instead of triggering the test from the UI, as this can cause performance problems for the load testing servers. We can use the JMeter command specifying the JMX filename:

-r uses the remote server specified in the jmeter.properties

-n will run it without the GUI mod

-t path to the jmx file

How We Decided on Using Puma vs. Unicorn for Our Rails Server

Puma and Unicorn are two different web servers for Rails. Both have benefits, so how do we decide which is best? It depends on the application. Some applications work best with Unicorn, and some work best with Puma. We had to choose between Unicorn and Puma for one of our Rails apps, and we did so based on data obtained from load testing. We performed a load test on the Rails app once with Unicorn and the other time using Puma. The only thing that we changed was the web server on the Rails app.

We got the following result from this test:

We found that Puma performs better for our Rails app when there is a large number of users on the platform. This means we will be able to handle more users with a fewer number of application servers.

Note: This depends on the type of server instance you are using and what kind of business logic processing the app performs.

Which Environment Should Be Used to Perform Load Testing?

Creating a production-like environment can be challenging and costly. So, based on what we are load testing, the infrastructure touching those components only can be upgraded to production-like. It saves cost. It is better to load/stress test your app once every three months. However, performance testing with a single user and validating that the response time is under the defined standard (something like 200m) is something that we need to add to the development cycle.

While load testing, we also need data-points, such as CPU/memory usage of the target server. A spike in memory/CPU usage can cause the application to crash. To measure hardware KPIs, add monitoring tools, such as Prometheus, before starting the load test.

How to get & build full URLs in Rails

Once suspended, honeybadger will not be able to comment or publish posts until their suspension is removed.

Once unsuspended, honeybadger will be able to comment and publish posts again.

Once unpublished, all posts by honeybadger will become hidden and only accessible to themselves.

If honeybadger is not suspended, they can still re-publish their posts from their dashboard.