Data is the new gold according to many scholars. It becomes much important to secure data on internet from the unauthorized users.

Reactjs is one the popular library of Javascript used to make SPA's and Mpa's. As is provides ease for developer to work over front-end development , its side effects are also huge.
It’s also true that React web apps may face certain security pitfalls. But it’s nothing discouraging, every framework has its own pitfalls. What matters is how you deal with React security vulnerabilities and protect your application against possible attacks. 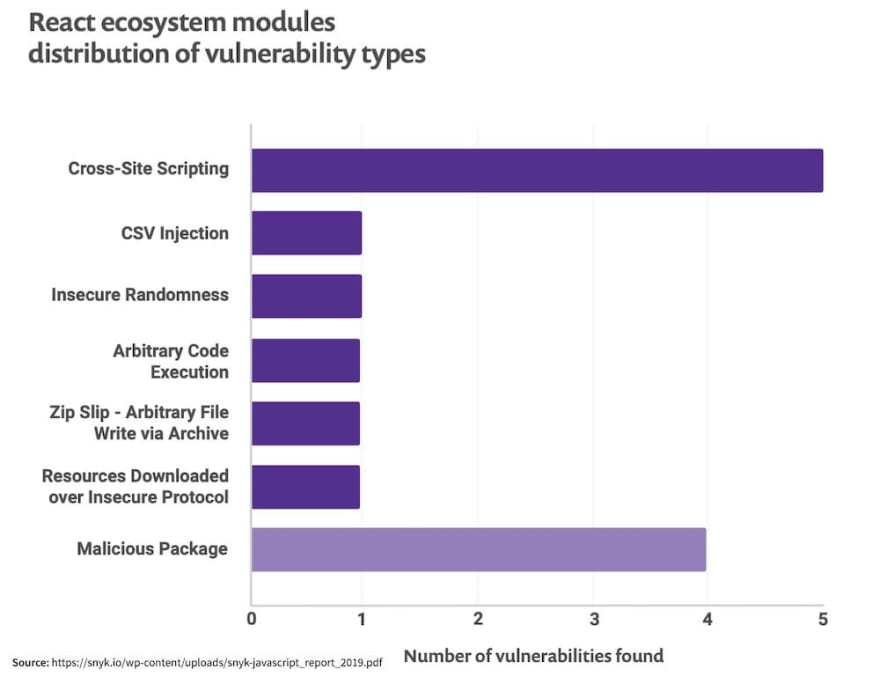 React Security Vulnerabilities and How to Prevent Them

APIs like createElement() help in automatic detection of injection attacks

2.SQL Injection
Another common React security vulnerability is SQL injection (SQLi). It’s a trick hackers use to inject your database with random SQL code. By doing this, they are able to receive, edit, or delete data irrespective of user permissions.

Hackers are able to pull off SQLi by faking or creating new credentials. They manage to access data on the server by getting the admin credentials. Such a security attack can be very dangerous as hackers can modify this data or even destroy it.

Broadly, a React application is vulnerable to this security pitfall because of improper coding of the app. Some developers may accidentally make it possible for SQL statements to enter through entry fields and move to the database directly.

In no case should you allow your React app to connect to any database that may have admin privileges.

Here’s a quick and dirty checklist you can follow to improve your authentication :

In certain cases, XXE attacks fall under the category of injection attacks. Outdated XML parsers in your React web app are the most vulnerable to injection attacks that lead to DoS attacks.

Contributing to an open source tech project on github.

Once suspended, igostic will not be able to comment or publish posts until their suspension is removed.

Once unsuspended, igostic will be able to comment and publish posts again.

Once unpublished, all posts by igostic will become hidden and only accessible to themselves.

If igostic is not suspended, they can still re-publish their posts from their dashboard.

Once unpublished, this post will become invisible to the public and only accessible to Prakhar Chauhan.

Thanks for keeping DEV Community 👩‍💻👨‍💻 safe. Here is what you can do to flag igostic:

Unflagging igostic will restore default visibility to their posts.