This is a draft of a talk I'll be giving at PyCon 2017, originally published on my blog. I'd appreciate hearing your feedback, questions and suggestions.

While I'm much more sympathetic to this second view, I don't think it's a sufficient answer. Given how different software projects can be from each other it seems unlikely that one set of answers will fit everyone:

What you need is not a single answer, but a way to choose the answers that match your situation and your needs. We'll start by considering the means you have available to you for testing. Then we'll consider why you would to test your software. Finally, we'll combine means and goals to see how you can choose to test your software.

What means of testing can you use?

As a starting point, let's consider the different means of testing available to you. Is the following code a test?

I would say that, yes, that's clearly a test. Says so right in the function name, even. The test proves that add() does what it ought to do: add two numbers and give us the result.

You've noticed, of course, that this test is wrong. Luckily our development process has another step: code review. You, dear reader, can act as a code reviewer and tell me that my code is wrong, that 2 + 2 is 4, not 5.

Is code review a form of testing? If you're trying to verify your code matches a specification, well, this is a test. You have a specification for arithmetic in your head ("2 + 2 = 4") and you are checking that the code follows it.

Let's consider code review as a form of testing, alongside automated unit tests. Even if they're both tests, they're also quite different. What is the core difference between them?

One form of testing is automated, the other is done by a human.

An automated test is consistent and repeatable. You can write this:

And the computer will run the exact same code every time. The code will make sure add() consistently returns that particular result for those particular inputs. A human would face some difficulties in manually verifying ten million different computations: boredom, distraction, errors, slowness.

On the other hand, a human can read this code and tell you it's buggy:

Where the computer does what it's told, for good or for bad, a human can provide meaning. Only a human can tell what the software is for.

Now we can categorize tests by the means used: humans test for meaning, whereas automated tests ensure consistency.

Why should you test your software?

The first possible goal of testing your software is to make sure it meets a specification. This goal is what most programmers think of when testing is discussed: it covers things like unit testing and manual testing by QA.
And as we saw it also covers code reviews. Your software has certain required functionality, the specification, and you want to make sure it actually does so now and in the future.

Some of the requirements are high-level: an online store wants customers to be able to order a product they've added to their shopping cart. Other requirements are low-level implementation details, mostly of interest only to the programmers. You might want the verify_creditcard() to accept a credit card number as a string and throw a InvalidCreditCard exception if the credit card is invalid.

The sum of all these requirements is the specification. It might be written down in great detail, or it might be a notion in your head (e.g. "2 + 2 is 4"). Regardless, you test your software to make sure it does what it's supposed to.

Sometimes, however, testing can have a different goal. In his book "Lean Startup" Eric Ries talks about building software only to discover that no one actually wanted to use it. Spending much time testing to ensure your software meets the specification is a waste of time if no one will ever use your software.

Ries argues that you first need to figure out if a product will succeed, by testing out what he calls a "Minimum Viable Product" with potential users and customers. This is a very different form of testing: it's not about verifying whether your software meets the specification, it's about learning something you hadn't known before.

The second possible goal of testing your software is in order to gain knowledge. Let's look at another form of testing with this goal. "A/B testing" is a form of testing where you try out two variations and see which produces a better result. Perhaps you are testing a redesign of your website: you show the current design to 90% of your visitors, the new design to 10% of your visitors, and see which results in more signups for your product.

Notice that you have two specifications, and you've already implemented them both. The point of the test is to figure out which works better, to learn something new, not to verify if the implementation meets the specification.

Now we have an answer for why you should test: either to verify you meet the specification or to gain new knowledge.

How should you test your software?

Combine the two goals we've come up with (gaining knowledge and matching the specification) and the two means of testing (human and software) and you get four different forms of testing, each providing a more specific testing goal: 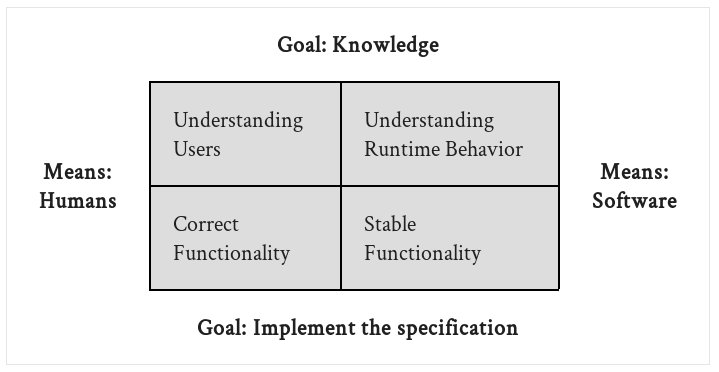 You must choose the appropriate ones to use for your particular needs and situation. Let's go through these four types of testing one by one and see when you should each.

These are all questions that cannot be answered by comparing your software to a specification. Instead you need empirical knowledge: you need to observe what actual human beings do when presented with your software.

These questions can't always be answered by comparing your software to a specification. Once your software is complex enough you can't fully understand or predict how it will behave. You need to observe it actually running to understand its behavior.

Humans are not a good way to test this. Humans are pretty good at ignoring small changes: if a button changes from "Send Now" to "Send now" you might not even notice at all. In contrast, software will break if your API changes from sendNow() to send_now(), or if the return type changes subtly.

This means a public API, an API that other software relies on, needs stability in order to be correct. Writing automated tests for private APIs, or code that is changing rapidly, will result in high maintenance costs as you continuously update your tests.

So what is all this good for?

Choosing how to test

First, our initial purpose: the model can help you choose what form of testing to do based on your goals.

Consider a startup building a product that it's not sure anyone wants. Writing automated tests may prove a waste of time, since it focuses on implementing a specification before figuring out what users actually want.

One possible alternative the Lean Startup methodology, which focuses on experiments or tests whose goal is finding what product will meet customers' needs. That means focusing on the Understanding Users quadrant. Once a product is chosen you spending the time to have more than the most minimal of specifications, at which point much more resources are applied to Correct Functionality and Stable functionality.

Recognizing when you've chosen the wrong type of testing

Second, the model can help you change course if you're using the wrong type of testing. For example, consider a hypothetical startup that writes tax preparation software (the details are inspired by a real company.) They wrote Selenium tests for their web UI at the same time were rapidly making significant changes to their UI.

Even with the tests their application was still buggy, and every time they changed the UI the tests would break. The tests didn't seem to improve quality, and they wasted developer time maintaining them. What were they doing wrong?

Their problem was that their system really has two parts:

A basis for discussing testing

Finally, the model provides a shared terminology that can help you discuss testing in its broadest sense and its many differing goals.

Why should you test your software? Either to gain knowledge or to implement a specification.

How can you test your software? With humans or with software.

Afterword: This talk is the result of many years of learning about testing. I started out not knowing about the subject, a yolo programmer writing terrible code. Then I learned about unit testing and test-driven development. This made things better, but I still learned the hard way that there are situations where the wrong form of testing can be unhelpful or costly.

If you'd like to do better than I did, sign up for my weekly Software Clown emails; each week I share one of my programming or career mistakes and what you can learn from it.

The Five Most Common Bugs you Should be Writing Tests for