Back in 2017, I was getting serious into home automation. I was debating between a SmartThings hub or a Wink hub. Both offered Z-Wave & Zigbee support and had similar features. Both had a good user community and priced about the same, then one day I was at Home Depot and a found a Wink hub on sale for $50! That sale kicked my home automation addiction into high gear.

Compared to what I saw from SmartThings, the Wink interface was clean and easy to use. Setup was mostly painless and (at the time) their support was responsive.

Fast forward to 2019, Wink was going broke, their support was non-existent, service outages are typical and I would go DAYS without being to use wink's service. At that point most of my house had been switched over from dumb switches to smart ones, lights bulbs were connected over Zigbee and Google Home speakers/assistances ruled almost every room.

Late 2019, Wink's Google Home integration was down for nearly a week and I finally hit my breaking point. It was time to switch hubs. My first thought was to go over to SmartThings, but I stumbled on a little device called Hubitat and I'm glad I did! I was able to catch a sale and pick up a Hubitat for about $100.

Wink Pros: user friendly, easy to set up, works with wide range of devices.
Wink Cons: Support nightmare, down all the time, device response can be slow, Cloud based - requires outside internet connection

Like I said above, Wink's setup was pretty painless. You download their app, it walks you through the steps and provides some help when you get stuck. Hubitat wasn't as easy but there is a lot of resources and users on their forums willing to help you out. I took it slow and moved one Z-wave switch from wink to Hubitat. And it was a total fail! :-(

I had always thought "Z-Wave is Z-Wave" and any switch would work with any hub, turns out that isn't the case. I quickly learned to check the List of Compatible Devices before doing anything else. Turned out my cheap $20 generic Z-Wave device wasn't on the list, but my Inovelli devices were. Moving compatible devices turned out to be straightforward and mostly painless.

One of the first things I noticed was how fast the Hubitat responded, it is freaky fast! Mainly due to running completely local to your network (not over the cloud). After years of Wink taking a full second or two on a good day to turn on a light, it was amazing to now see sub second changes! Sure, a few seconds doesn't sound like a long time, but Wink always felt slow.

Imagine using Wink's app, you click the device you want to control, you see a little spinner, then 2 seconds (on a good day) later the light turns on. Wink on a bad day was more like 5-10 seconds, and sometimes not at all!

Now imagine you click that device in Hubitat, and the light turns on as fast as the buttons changes on the web page, factions of a second! It feels as fast as controlling the switch directly.

Wink's app is pretty clean, simple and easy to use. Sometimes it can be sluggish, but overall it's a nice app when it works. Hubitat's app is highly customizable, so much so that you have to set EVERYTHING up. You'll need to build what Hubitat calls a Dashboard. It starts completely empty and it's up to the user to place buttons on the screen and configure the size, position, color, etc.. You can make a somewhat good looking interface but you will spend some times to get there.

If you have Google Home devices, they integrate with Hubitat cleanly, and you can use the Google Home App instead. Going the Google Home route requires an internet connection, but you can also use the local Hubitat website running locally if your internet goes down. (I assume Alexa devices work as well, but I'm not in that camp).

Wink has a feature called Robots that allow you to build simple automations, like time based triggers or actions based on other devices. Hubitat has a complete Rule Machine built in. Wink's robot's are simple to setup but they are also pretty limited...

For me, Rule Machine had a bit of a learning curve and was less than intuitive. It was easy to get lost deep in the Hubitat screens and not always clear what/where you needed to be. But once I wrapped my head around their interface, I was able to crank out rules that were far more advanced then a Wink Robot could ever handle.

In Wink you can configure a light to turn on when a door is unlocked. Pretty easy to setup and a nice feature.

In Hubitat, we can do the same thing:

And we can also set a condition, so this only turns on when it's actually dark out!

(Note: False in this picture is due to the time of the screen shot not being between sunset and sunrise, it is showing the current evaluation of the rule)

We can get even fancier and do different rules based on the user lock code that unlocked the door! 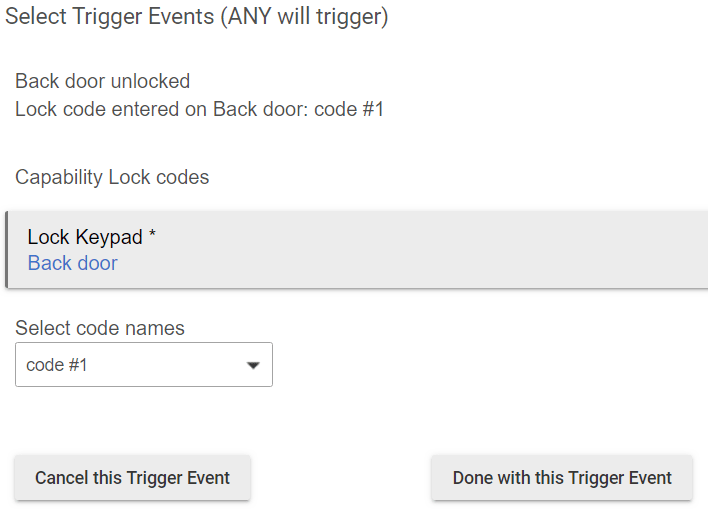 This is just a small sample of Rule Machines Power!

I had some of the cheaper Black Series switches from Inovelli and they always just worked. I read that Inovelli developers had worked with Hubitat to build really good driver support. The Red series costs a little more, but adds double/triple button taps and a ton of other features. After installing one it was clear this pair was a match made for each other.

Most switches will just give you On & Off commands, Inovelli Red Switches added a ton of other commands including holding On or Off and pressing them X times (up to 5).

You can use this with the Rules Machine to do different actions based on how many times a button was tapped. I have my Kitchen switch set up to also turn on the living room lights if you press it twice. 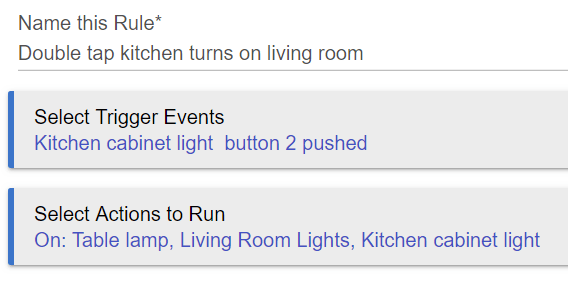 You may have notice that rule also turns on the kitchen, you could define rules on this switch that only control other devices. (I thought that was a bug at first, but then I realized you might want to do that, and it's a feature).

These switches also provide options for setting the LED color and the ability to change the LED based on notification settings, you can use the Rule Machine to set the notification state from other events. An example, I can flash red if the doors are unlocked after dark, or pulse green if they are locked.

Wink doesn't really support much outside of what you get in their app. Hubitat has a community building custom apps and drivers. Let's say you have some device that isn't supported today, but maybe it has a web base API or other way of talking to it, you could build a custom Hubitat driver and tie it in to your home automation!

Hubitat uses Groovy (running on top of Java) to write Drivers, and has a web based editor built in. It appears they borrowed a lot of their scripting from SmartThings. In fact some SmartThings code will run directly on Hubitat with zero changes. The APIs are the exact same in most cases.

I built a custom driver for my home security system since it wasn't supported out of the box. In a future article I'll cover how I built it.

To wrap up, I'm happy overall with my move, Hubitat took a few days, ok a week, to really get everything running. There was a big learn curve and setup required doing some reading/research. But now that it's up, it's rock solid and I never really touch it.

If you haven't started your home automation journey, Hubitat may make you want to pull your hair out, but if you have dabbled or like to tinker, Hubitat is a great little device.

How I Backup/Sync my Dotfiles & Apps