My son needed to learn how to log in to a program for his school. Previously they had used QR code cards but for the new school year, he would have to manually type in a username and password. So I decided to build a login page for him to practice at home.

I looked at the app he would be using, the interface was a basic login form with an option to show the password.  I searched for  login examples and found a Python and flask tutorial that was close to what I needed.

As I worked through the tutorial, I noticed some of the code snippets were formatted incorrectly. The code appeared in plain text not as code. Instead of showing brackets {} , there was unicode for the brackets. All the indentation was lost, everything was aligned left.

I wrote the correct syntax and got the basic functionality to work. It was just a basic white with black text form. After adding some styling and instructions it looked like the following image. 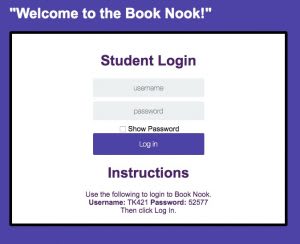 The School app had a show password option.  I added a some JavaScript and a checkbox. 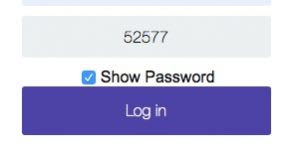 I used a template for the CSS. Then modified it to the school's color scheme. This satisfied  my initial concept for the app but I want to add replay value.

I had my son test it He was able to log in easily but all I had after log was the words "Welcome to book nook." I wanted to keep him practicing so I looked for a way to encourage repeated use of the app.

First, I tried some CSS animation. It was neat but the same thing every time. Then I decided to try randomly displaying text. I added 10 inspirational quotes about reading. I made an array of quotes, then used Javascript to display them when a button was clicked.

The quote box is hidden till the button is clicked, another click replaces the quote.

What did I Learn?

This was a fun satisfying build. I learned some Flask and how to show a password with JavaScript.

Chris Jarvis
Fullstack developer with a passion for UX. @jarvisscript@hachyderm.io
What was your win this week?
#discuss #weeklyretro
I asked OpenAI's chatGPT to write a ballad about Open source tech 😂
#opensource #webdev #github #python
Music Monday — What are you listening to? (Classic Rock Edition)
#watercooler #music #discuss

Once suspended, jarvisscript will not be able to comment or publish posts until their suspension is removed.

Once unsuspended, jarvisscript will be able to comment and publish posts again.

Once unpublished, all posts by jarvisscript will become hidden and only accessible to themselves.

If jarvisscript is not suspended, they can still re-publish their posts from their dashboard.

Once unpublished, this post will become invisible to the public and only accessible to Chris Jarvis.

Thanks for keeping DEV Community 👩‍💻👨‍💻 safe. Here is what you can do to flag jarvisscript:

Unflagging jarvisscript will restore default visibility to their posts.