In the last article in this series, Stock Photo Browser in React Native: Getting Started, we initialized a React Native app with TypeScript. If you haven't followed through that article, I recommend taking some time to go through it to make sure your project is set up in the same manner as the one we'll be working on below.

Adding navigation to your project

Now that we have a working app, let's add in a way to navigate around to different screens. If you've checked out the Unsplash app for iOS, which we are using for our UI inspiration for this app, you have most likely noticed that there are a few different screens that we are going to need to build. There's a great library called React Navigation that helps with navigating from screen to screen in React Native apps.

Installing the navigation library and dependencies

To install the React Navigation library run this command in your terminal. Make sure that you're in your project root directory before doing this.

This will get you the main React Navigation module for React Native which orchestrates interactions between a few other modules. After this initial install, you need to also add the following modules to your project. Since we are using a bare React Native workflow with TypeScript we can run this command to install the extra dependencies. 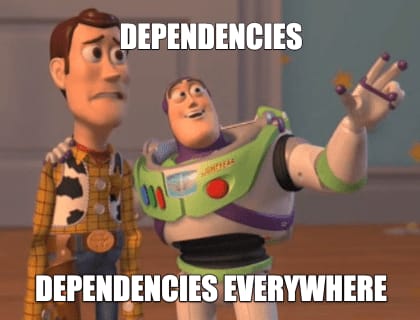 Since we are using a version of React Native greater than 0.60 we don't need to link native modules with react-native link. All we need to do to finish the installation is to change into our ios directory and run the pod install command.

Adding the code to your project

After installing all project Pods afresh we need to make some changes to our application code. At this point, we need to import the react-native-gesture-handler module which helps with handling the default swipe-to-go-back-a-screen gesture that you will likely have had experience with on iOS. Also, we'll be adding a NavigationContainer component to the top level of our application which will give the app's screens the ability to use various navigators. We'll be making these changes in the App.tsx file located in the project's root directory.

To add a stack navigator to the app we'll need to move the home page UI out of the NavigationContainer component and place it in its own file, then import that home page UI into the App.tsx file and add it as the default screen in the stack navigator.

First, let's do a quick refactor and create a screens directory in the project root directory and inside that directory create a file called home.screen.tsx. 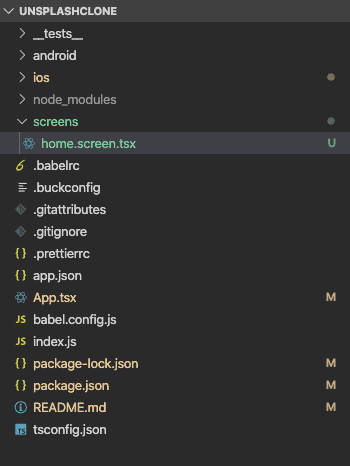 After creating that new screen file, remove the home screen components from the App.tsx file and place it in the home.screen.tsx file. When you're finished it should look something like this.

Now run your app in the simulator to make sure that everything is installed correctly and running as expected. If everything went to plan you should see the same default text telling you to open the App.tsx file and make some edits but now with a navigation bar titled "Home" at the top of the screen like this. 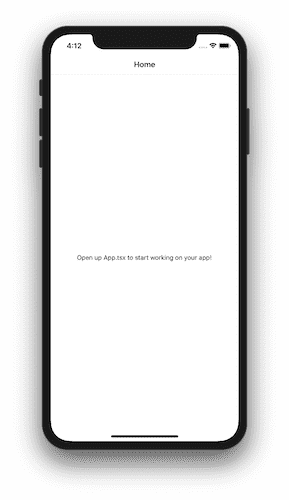 Run this command to build and run your app on the simulator.

Now that we know that the stack navigator is installed correctly let's disable that navigation bar since for this screen we're going to add a custom navigation bar. For now, just disable the navigation bar by adding an options prop to the AppStack.Screen component for the home screen and setting header to a function that returns null. It should look something like this.

At this point, we have a new React Native app with the basics of screen-to-screen navigation implemented. Your app now looks the same as it did when we started this section, but it's set up so that we can easily navigate to any new screens we create.

Stay tuned for the next section when we add API integration with Pixabay and data management with Mobx.

To see the full example so far you can check it out on Github, or if you want to see changes between the last article and this one you can view those differences here.

A Beginner's Guide to Building an eCommerce Store for VARs