A lot of languages distinguish between single-line and multi-line strings. They have specialized syntax for declaring one or the other.

In Ruby, any string can be a multi-line string if you hit the Enter key a few times.

Nevertheless, there are conventions. When I want a multi-line string, I tend to reach for a heredoc. Another convention I've seen in a few codebases are these triple-quote strings.

Like me, you probably look at that triple-quote syntax and think, "yeah, I'm pretty sure I've seen that before." 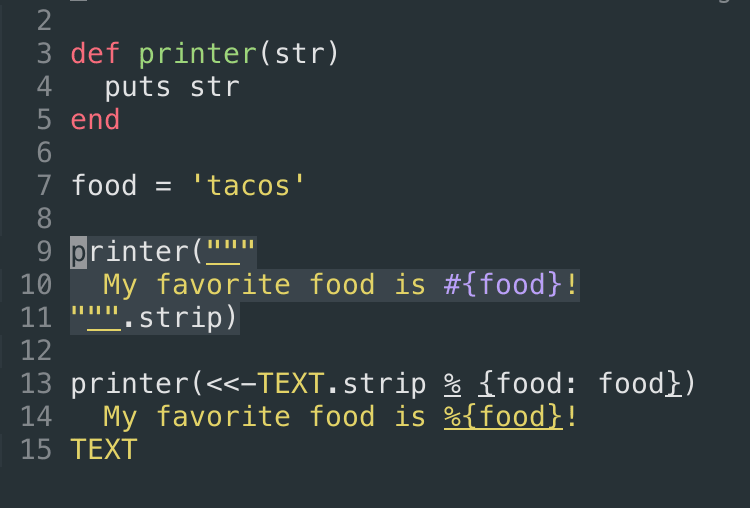 I'm super curious if anyone can link me to (primarily) docs or (secondarily) a blog post explaining this style of multi-line string that starts and ends with three double quotes (""").

I can't turn anything up so far.

Fun Side Quest: try finding where in the Ruby docs this syntax feature is discussed.

Don't spend too long searching though. As the title of this post suggests, there is no triple-quote multi-line string syntax.

So, what gives? Why does this work and where did it come from?

Let's start with "why does this work?"

First, let's demonstrate that we can do multi-line strings with the "standard" double-quote syntax.

It prints out the string, newlines and extra spaces included. And as expected, puts returns nil.

These two lines do identical things. A feature of the Ruby parser and interpreter—actually not a feature so much as an obtuse implementation detail adopted from C—is that adjacent strings are concatenated together (source).

Let's see how that plays into our multi-line string example.

This explicitly concatenates empty strings on to either end of our multi-line string with the + operator.

As we just learned, that is equivalent to the following.

This omits the + operators, but has identical behavior.

We can take this a step further by removing those superfluous spaces.

So what appears to be some special triple-quote multi-line string syntax is instead a syntactic trick that exploits a Ruby interpreter feature where adjacent strings are concatenated (source).

On to the other question, "where did this come from?"

The best I can tell is that this syntactic convention was introduced to Ruby developers through Learn Ruby The Hard Way.

I hope that was enlightening or at least cleared up some confusion. For my part, I will continue to reach for heredocs when appropriate and do my best to remove this pseudo-syntax from the Ruby codebases I work in.

If you enjoy my writing, consider joining my newsletter or following me on twitter.

How to use Devise with turbo in Rails 7

Once suspended, jbranchaud will not be able to comment or publish posts until their suspension is removed.

Once unsuspended, jbranchaud will be able to comment and publish posts again.

Once unpublished, all posts by jbranchaud will become hidden and only accessible to themselves.

If jbranchaud is not suspended, they can still re-publish their posts from their dashboard.

Once unpublished, this post will become invisible to the public and only accessible to Josh Branchaud.

Thanks for keeping DEV Community safe. Here is what you can do to flag jbranchaud:

Unflagging jbranchaud will restore default visibility to their posts.