There are two major options for securely exposing access to your MySQL database over an unsecured network: an SSL connection or an SSH tunnel. The CData MySQL Driver provides a secure, live data connection to MySQL data from popular BI & Analytics, database and app development tools, supporting both SSL connections and SSH tunneling. In this article, we explore how to use the CData MySQL Driver with SSH tunneling, which is often easier to build and more secure than SSL due to the driver’s built-in support for tunneling.

In addition to supporting encryption through SSH security protocols, which have a great record against attacks, MySQL can be configured to only accept traffic from 'localhost,' blocking all connections except for the configured tunnel.

An SSH tunnel requires an SSH server to be running in the same environment as the MySQL instance but setting up a tunnel is simple once the server is up and running. SSH employs robust encryption and, via the tunnel, makes client connections appear to come from the SSH server (and not from a remote client). Because you don't have to configure your MySQL server to allow remote connections when using an SSH tunnel, your MySQL instance is safe.

Each CData MySQL connector has connection properties that allow you to connect to a MySQL instance through an SSH server. In order to connect, you will need to set Use SSH to "true" and set the following properties:

An example of a configured SSH client in our ODBC Driver is shown below, although the connection can be configured in any of our connectors. 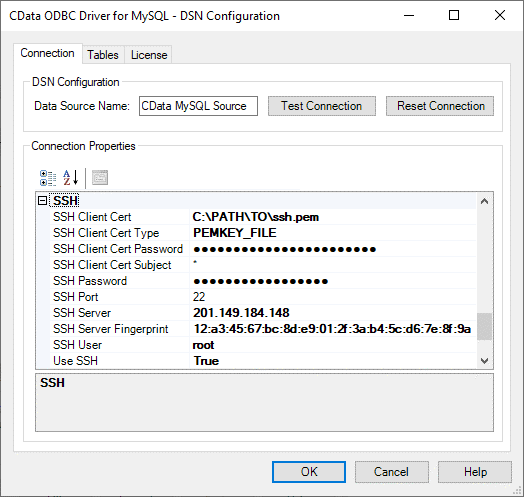 Depending on the connector, you may need to configure a connection string, similar to the following:

Because the SSH client is built directly into the connectors, the setup and usage is exactly the same, regardless of the operating system. Set the connection properties and start working with remote MySQL data from your local system, all through a secure SSH tunnel.

The built-in SSH client in the CData Connectors for MySQL allows you to simply connect to a MySQL instance over an SSH tunnel. CData provides standards-based MySQL connectors for ODBC, JDBC, ADO.NET, Python, and other technologies. In addition, CData offers drivers with the same built-in SSH tunneling capabilities to access every major database. You can get free 30-day evaluations of all drivers on the CData site.

i can do it