Over the past couple of months, I've released a series of videos exploring the fundamentals of building an interactive Domain-Specific Language (iDSL) from the ground up.

To be more specific, the series describes how to build an external DSL and REPL, by means of a general-purpose language - Crystal, in this case. Concepts you'll find here are 100% transferable, so you should be able to replicate the behaviour our iDSL in your favourite language 🚀

I've collected all the episodes in this article, with some further technical comments, reflections and reading recommendations.
You can find the project's source code on GitHub, in case you feel like following along.

I've broken our external iDSL architecture down into 5 components. 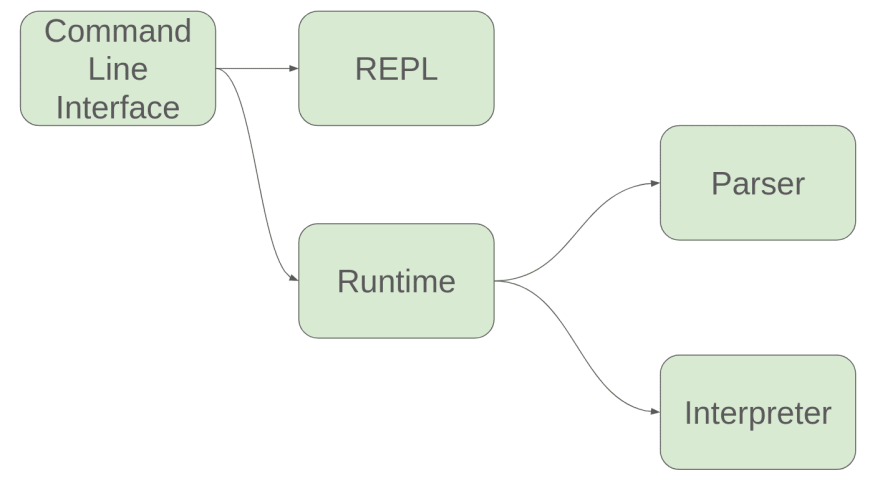 A REPL is "an interactive computer programming environment that takes single user inputs (i.e., single expressions), evaluates (executes) them, and returns the result to the user" (source: Wikipedia)

Together with the Runtime System, this component is what makes our language truly interactive. A REPL can make on-boarding new users easier, and let them explore our language API in a frictionless way, e.g. thanks to some auto-completion feature.

A parser takes instructions written in our DSL, and translates them into commands digestible by the language interpreter.

All programming languages have one. Some languages parse input into commands and evaluate them in one go, others hand over the parsed command to an interpreter or are part of a compiler's phases.

In our DSL, the parser will turn user input into an intermediate representation for our interpreter to consume.

In our architecture¹, the interpreter is the component that evaluates commands coming from the parser - the Eval in REPL - and computes some result to be handed back to the user.

In very simple languages, commands can be interpreted in isolation, with no context of previously run instructions - a calculator supporting basic arithmetic is a good example of this. If we want to take this further, and interpret commands in context, then we need to leverage a runtime system.

A runtime system is the access point to the DSL's parser and interpreter, and manages the state of the system at runtime. Interestingly, not all runtime systems support running commands interactively. We'll make sure ours does 😉

To enable our users to launch scripts or run the REPL from the command line, we'll provide the user with a command-line interface. Our CLI will be akin to python, in particular.

Getting the REPL out of the way

I first had the idea to make a video on how to build a REPL when I stumbled upon Fancyline, a Crystal library that makes it extremely easy to build complex behaviour into your CLI.

This series was the perfect use case to try it out, so, in session 1, we leverage Fancyline to write a general-purpose REPL featuring error handling, command history and backward search. Just brilliant 🌠

Code highlight. In session 5, we'll add support for one more feature: loading scripts from the REPL via the magic-command %load. Here is what that looks like in the code:

In session 2, we build a parser for a prototypical iDSL called IGOL (Interactive [Conway's] Game Of Life).

Thanks to Pars3k, a Crystal library implementing parser combinators, we can define a modular, human-readable and testable parser in a few lines of code.

I've known about parser combinators for a while, but this introduction by Li Haoyi - an exceptional member of the Scala community - reignited my interest in building something with them 🙏

Code highlight. I used the dataclass macro to define the Algebraic Data Types representing the commands. Here is an example from the code:

Reminder. Unlike structs, classes support defining recursive data types. This is a pretty desirable feature when defining the grammar of a language - see this example.

In session 3, we define the interpreter as a function that transforms a State and a Command into a new State, plus some return value. A signature for such a function could look like

where T is the type of the return value.

In this first implementation, we limit state management to the GameOfLife grid, and always return a String as return type.

Code highlight. We leverage Crystal's case statement to safely match a command to its runtime type. Note how the return type of interpret is a tuple containing:

You can look at the code above in context here.

In session 4, we define a generic runtime system to support any interactive DSL. To prove it, we'll define a minimal DSL for a counter - not the most exciting DSL in the world, I admit - and show how effortless it is to plug it into the runtime.

Code highlight. The runtime class is a beautiful display of Crystal generics: in the code below, State, Cmd and Err are type parameters, meaning you can instantiate the Runtime class with any state, parser and interpreter satisfying the given generic signatures.

In session 5, we define a user-friendly CLI that will either launch the REPL or run a script, depending on whether a file path is provided.

We'll see how Clim, a Crystal library to build CLIs, makes it simple to put together a CLI that is both pretty and extensible, in a few lines of code.

Code highlight. To make the CLI reusable by other iDSLs, we used macros 🔮

This allows us to instantiate a CLI for any iDSL, provided that their module defines the #version and #runtime methods. Here is the final main for the IGOL iDSL:

And here is the end result:

This is it! If you managed to read this far, then you deserve a ⭐

I hope you enjoyed the write-up and learned something new in the process. If you have any question or would like to share your iDSL stories, then I'd love to read them in the comments section below.

how to make a parser?

Is Python compiled or interpreted?

Making a Simple Calculator in Rust