Ever wondered how you could process Scala’s case classes and sealed traits in a generic way without relying on runtime reflection? Traditionally, generic programs have been written with the help of reflection APIs. However, since reflection is usually done in runtime, it sacrifices type-safety, and introduces unnecessary lookups. Could there be a way to create generic solutions in Scala without sacrificing type-safety or efficiency?

First, I’ll demonstrate a example situation where generic programming is a useful for solving the problem. After that, I’ll show how that specific example could be solved for heterogenous structures, while explaining the underlying concepts. Finally, I’ll use the solution made for the heterogenous structures to create a solution for the standard Scala types.

Let’s assume that we’ve just inherited a Scala library that contains a large algebraic data type (ADT) consisting of immutable case classes, sealed traits, and various Scala value and collection types. The ADT doesn’t contain any open traits, so all of the possible sub types in any sub hierarchy are known at compile time.

Our task is to implement a program that calculates the depth of any object of the ADT. For the sake of simplicity, we’ll only include the case class constructor and copy constructor fields when calculating the depth of a case class. For example, a value such as Int is one level deep, while a case class Coordinate(x: Int, y: Int) is two levels deep. Similarly, the maximum depth of a collection such as Scala’s Vector would be the depth of its elements plus one. Depth calculation for type Vector[(Int, String)] is demonstrated in the picture below. The left side of the image shows the type of each level in the tree shown in the middle, while the right side shows the depth of each level.

The method depth calculates the depth of the given object t. Here are a few examples instances of the type class for existing types:

The type class instances for value types are straightforward to implement. Value types such as strings and integers are always one level deep regardless of the value, thus the method will always return 1 in their instances. The same rule can be applied for other value types as well.

The following example contains a sample ADT and the instances for calculating the depth of the ADT. It is deliberately made verbose to highlight the common pattern in processing case classes and sealed traits. A more pragmatic solution would replace the computations that obviously yield static values with the actual values.

From Case Classes to Products

Case classes in Scala have similar characteristics as tuples, i.e. they’re both combinations of multiple fields, products. Case classes can be converted to tuples by representing each field in the case class as a field in a tuple. For example, the Surface case class can be expressed as tuple type (String, Shape, Shape). Since the number of fields varies between case classes, there needs to be a tuple type for each number of field.

We can further reduce the amount of types needed for expressing all case classes using just a tuple of two fields. The first field in the tuple contains a field from the case class while second field contains another tuple that contains more fields. For example, the Surface case class can be expressed as nested tuple type (String, (Shape, (Shape, Unit))). The unit type is used here for terminating tuple nesting.

Shapeless contains a data type for products that’s similar to nested tuples: the heterogenous list (HList). The HList is essentially a list type that has type information for each of its fields. It has two sub types: the cons type, ::[+A, +T <: HList], and the nil type, HNil. The cons type consists of one field and another HList, while the nil type represents an empty HList. The Surface would be expressed in HList format as ::[String, ::[Shape, ::[Shape, HNil]], which can be expressed in the infix format as String :: Shape :: Shape :: HNil.

From Sealed Traits to Coproducts

Shapeless contains a data type for coproducts as well. The Shapeless type Coproduct consists of the cons type, :+:[+H, +T <: Coproduct], and the nil type, CNil. The cons type can either be of type Inl or Inr. The Inl is the equivalent of the Left value in the nested Either: it’s always contains the actual choice. Similarly, the Inr is the equivalent of the right value in the nested Either: it contains the the rest of the coproduct. For example, the sealed trait Shape can be expressed as Circle :+: Rectangle :+: Triangle :+: CNil.

The same strategy that was used for defining the type class instances for the HList can be be applied for the coproduct case as well. It has instances for the empty case, CNil, and the general case that can handle just the one possible choice at a time.

Additionally, we also need to specify an implementation for the method project. It defines how we can derive a type class instance for a type in the cases where we have a type class instance for another type and a way to transform the values between the two types (an isomorphism between the types). The implementation for the method is quite simple in our case: we simply create another instance of the depth type class to take advantage of the isomorphic property.

We now have a way to calculate the depth of any case class and sealed trait. For the cases that are outside of that category (e.g. value types, traditional classes, collection types) we can specify specific type class instances for calculating the depth.

Instead of attempting to express the solution to our problem for standard Scala types directly, we modeled the solution using Shapeless’s product and coproduct types, and brought that solution back to Scala types using type class instance derivation. This process is demonstrated in the picture below. 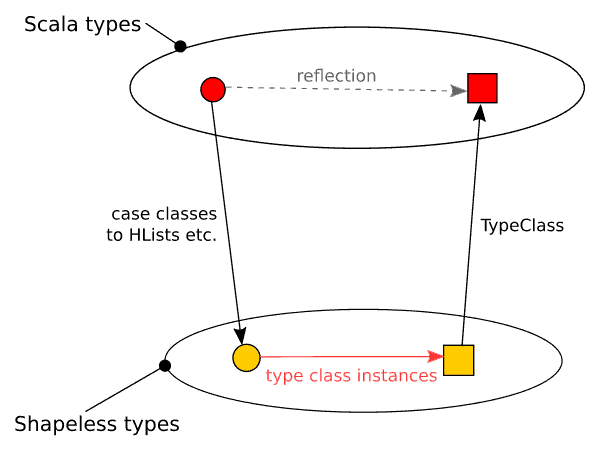 In this article, I’ve demonstrated how generic solutions can be created for ADTs without relying on an expensive runtime feature such as reflection. We gain type-safety and efficiency over reflection by leveraging the compilers ability to resolve all of the code used for the solution during compile time. This was made possible by Shapeless’s automatic type class instance derivation feature. The instance derivation relies on a particular way of representing products and coproducts, which were also covered in this article.

The style of generic programming shown in this article opens up all kinds of possibilities for writing boilerplate free code. Besides our toy example, the feature can be used for implementing pretty much any kind of generic one-way conversion. For more examples, check out how type classes can be derived for string conversion and monoids.

While Shapeless provides a nice, clean abstraction for generic programming over products and coproducts, it does have a few practical problems. When creating a generic solution based on type classes, you especially have to be careful on the edge cases such as Scala values and collections. If you leave out a type class instance for a type that is used in your ADT, the compiler will not tell you which specific instance is missing. It is also important to spot the special cases that might be already covered in type class instance derivation. For example, an instance can be automatically derived for the Scala List, but in many cases such as in our depth calculation the result of that instance will be different from what is expected.

Automatic type class instance derivation is just one of many Shapeless features. It includes many other structures for reducing boilerplate while still keeping the code type safe. One such feature is the extensible record, which allows reusing existing fields for creating new record types in an ad-hoc manner. This makes it possible to apply functions that rely on specific fields for any new records that contain those fields.

Scratching an itch with Spark

A Successful IOC Pattern with Functions in TypeScript

Once suspended, lepovirta will not be able to comment or publish posts until their suspension is removed.

Once unsuspended, lepovirta will be able to comment and publish posts again.

Once unpublished, all posts by lepovirta will become hidden and only accessible to themselves.

If lepovirta is not suspended, they can still re-publish their posts from their dashboard.

Once unpublished, this post will become invisible to the public and only accessible to Jaakko Pallari.

Thanks for keeping DEV Community 👩‍💻👨‍💻 safe. Here is what you can do to flag lepovirta:

Unflagging lepovirta will restore default visibility to their posts.