This summer, I attended LaraconEU Amsterdam. It was my first conference ever, and I had a great time, made some friends and even gave an improvised Unconference talk! Here's my attempt at describing my experience in Amsterdam.

I arrived at the Schipol airport on Wednesday morning, a day before Laracon. I was really excited to finally meet two long-time online friends. We spent most of the day together, joking around and geeking about code, design, DevOps & other fun stuff (yeah, I know, what normal teenagers do).

I had joined the LaraconEU Telegram group earlier that day, and when I got home I was surprised to find out that Xander Smalbil, the organizer of the Unconference, had messaged me to ask if I wanted to give a talk. I initially said no, but after really thinking about it (and some peer pressure from Twitter) I finally agreed to do it. The next day, when I got to the venue, I wrote about the talk on a small piece of paper, and kind of forgot about it for the rest of the day. 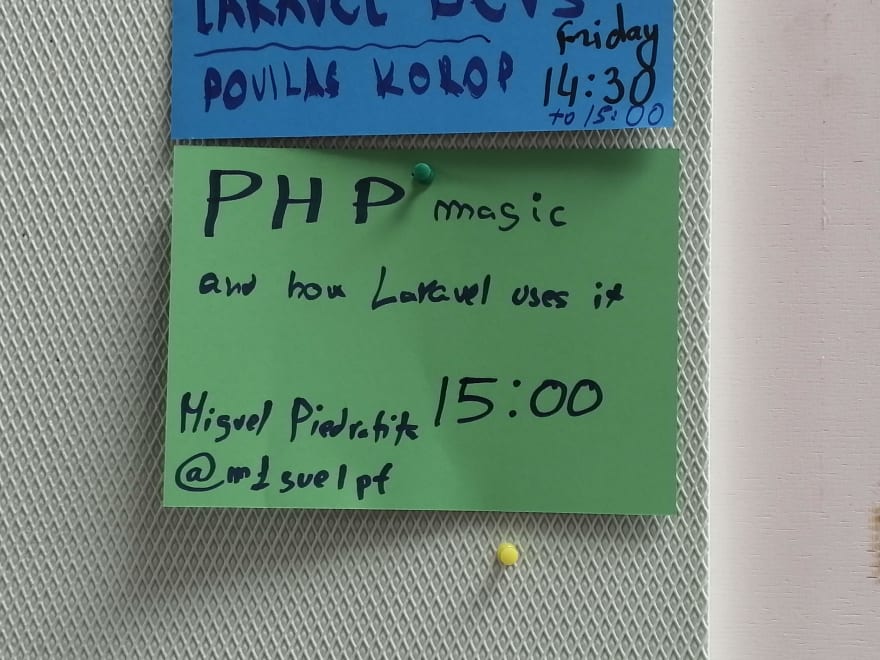 I woke up relatively early (7:30 is early for me) and jumped into the ferry that would take me to the NDSM area, where the venue was. I checked in, got a cool lanyard and a badge with my name, and got inside. 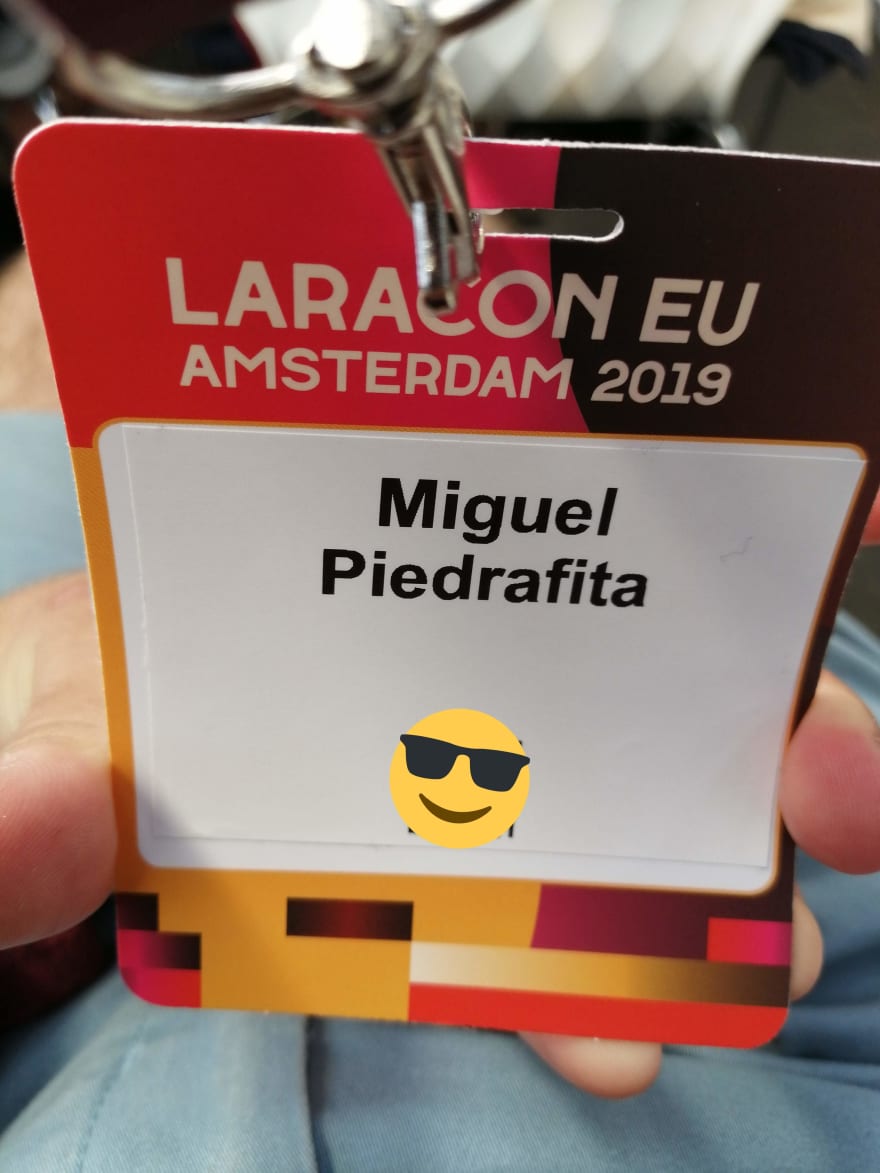 I honestly didn't expect the venue to be so big. Maybe it's because it was my first ever conference and I didn't have anything to compare to, but I was really impressed. I spent some time awkwardly walking around (I'm kind of an introvert) and ended up sitting on a sofa and coding while I waited for the first talk to start.

The first break came after two great talks (the first one, about Persuasive Design Patterns, was especially awesome, one of the best IMO), and I finally started getting used to talking with people I only knew from Twitter. Meeting Caneco, who had been waiting to see "if I had a real face" really helped. Before I knew, it was time for more talks again. 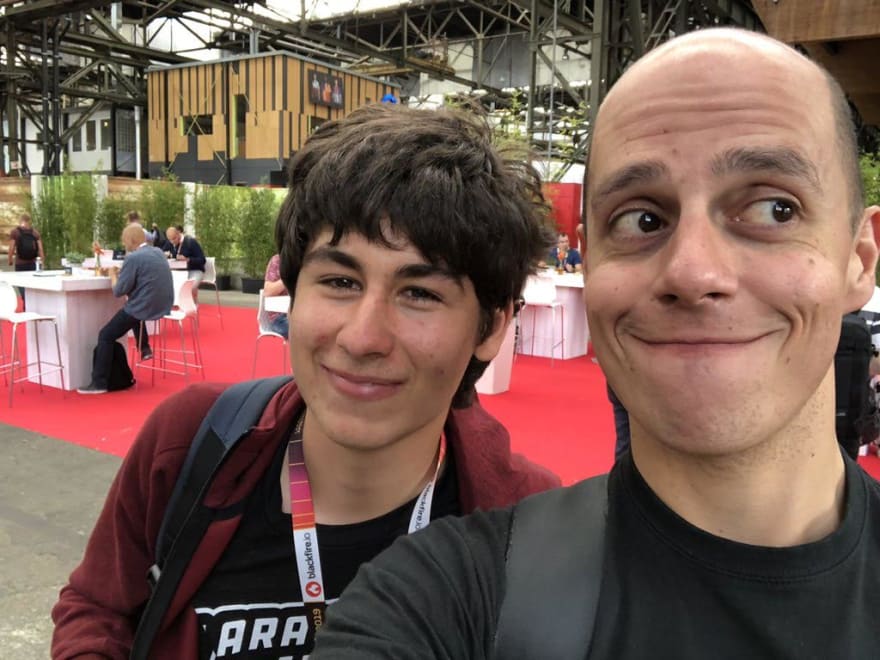 Another three great talks (though I zoned out on the second one, not my topic I guess). The last one, a talk about the Laravel Notification System by Christoph Rumpel was probably the best of them. It was one of these talks where I didn't think I was gonna learn anything but ended up picking a few tricks. Anyway, Christoph was one of the people I wanted to meet, so I found him around the Unconference zone on the next break and joined into the conversation (in retrospect, the fact that this went well gave me a lot of confidence to continue approaching people and joining conversations the next day). He is a really nice guy, and we ended up talking a lot through the conference. We also took a picture that would later become my first photo online: 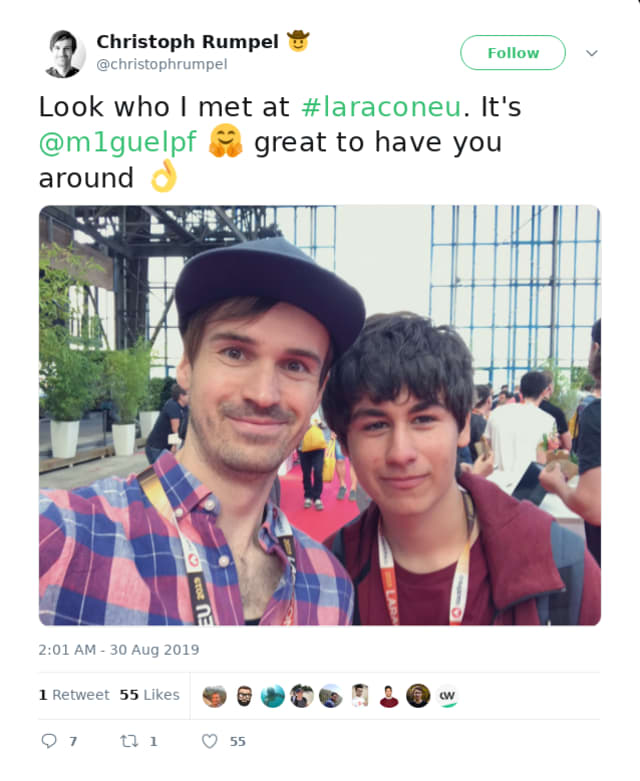 The rest of the day was filled with a rather chaotic lunch and some amazing talks (including one of the best talks on the entire conference if not the best, by Antti Rossi, a talk with amazingly-crafted slides by Caneco and a really interesting talk about performance by Kasia Zien). And, just like that, the first day was over. I wanted to join some folks for dinner, but my parents wanted me to spend the rest of the day with them (and, like, they weren't asking) so I caught the ferry again and got back into the boat-apartment my parents and I were staying in.

When I arrived home, I luckily remembered I had to prepare some slides for my Unconference talk (don't want to think about what would have happened if I had forgotten). I opened Deckset and got to work. I wanted to get everything done quickly but I ended up spending a lot (and I mean A LOT) of time on the details, like carefully designing a pattern-based background for my slides with Sketch or coming up with jokes for placeholders on the examples. I finally finished the slides at 1 AM, put out a tweet in hopes someone would come to the talk (I was honestly afraid no one would) and went to bed. 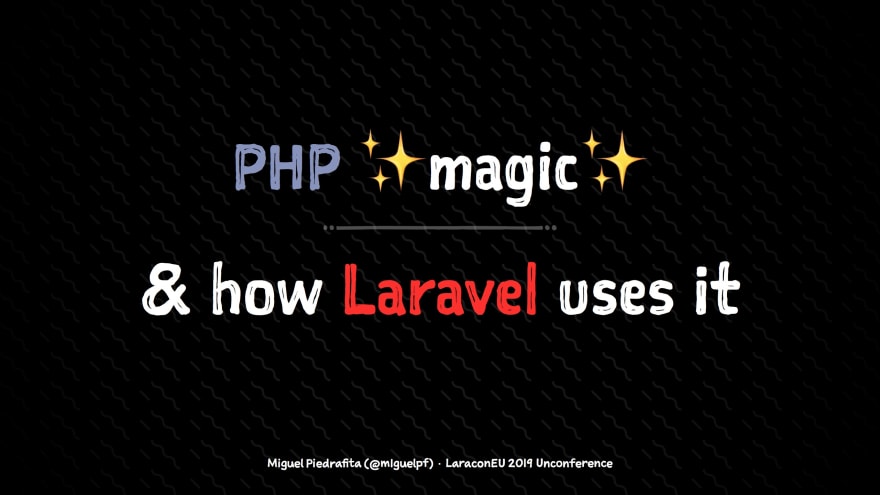 I woke up early again, just a lot more nervous because I was completely sure I was going to mess up my talk. Fortunately, as I got into the venue, I got more and more relaxed until I just forgot about it. I was more comfortable talking with people, but still ended up coding a bit while waiting for the talks to start (I optimized one request from 5s to .2s using techniques learned at the performance talk from the day before and was really happy about it 😁).

The first talk of the day was somewhat boring for me (SOLID architecture isn't exactly my favorite topic), but after that, Dries' talk about Event Sourcing got me excited again. I kept talking more and more with a lot of different people on the break, and especially enjoyed Sebastian's talk on Inertia.js (which I've been trying out lately). After that was another technically difficult lunch (someone could say they... forgot to start horizon to process the queues) and a really interesting talk about deploying Laravel to Kubernetes (another one of the best talks in the entire conf). While I was learning how to use the kubectl CLI, I could feel I was getting more and more nervous about what came next.

I left as soon as the Kubernetes talk ended, and moved to the Unconference zone to listen to Povilas' unconf talk on managing junior developers (ironic, I know). I checked multiple times to make sure my slides hadn't magically disappeared (they were still there) and nervously shifted in my seat, growing nervous as my clock approached three o'clock. And finally, Povilas hanged the mic over to me. 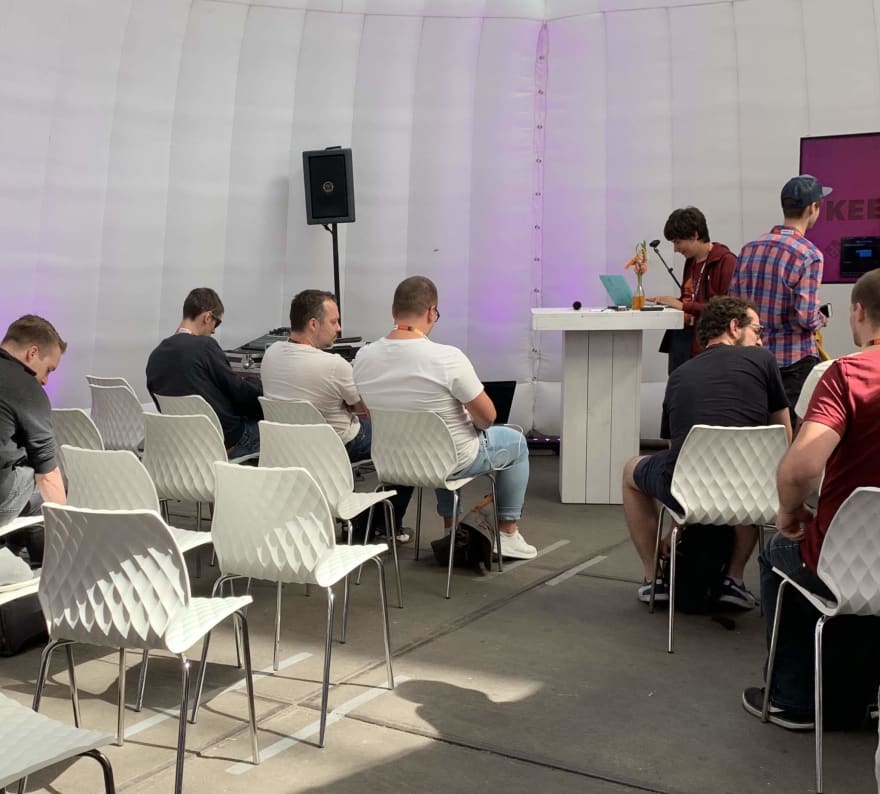 After some problems when setting up the screen (which Cristoph helped me with), I finally started. I was really nervous (and maybe talked a little bit too fast) but people seemed to be enjoying the talk. When I finished, I got A LOT of positive feedback from everyone. In retrospect, it was an awesome experience, and I'm really looking forward to doing it again soon (and hopefully at the main stage next year 😁). 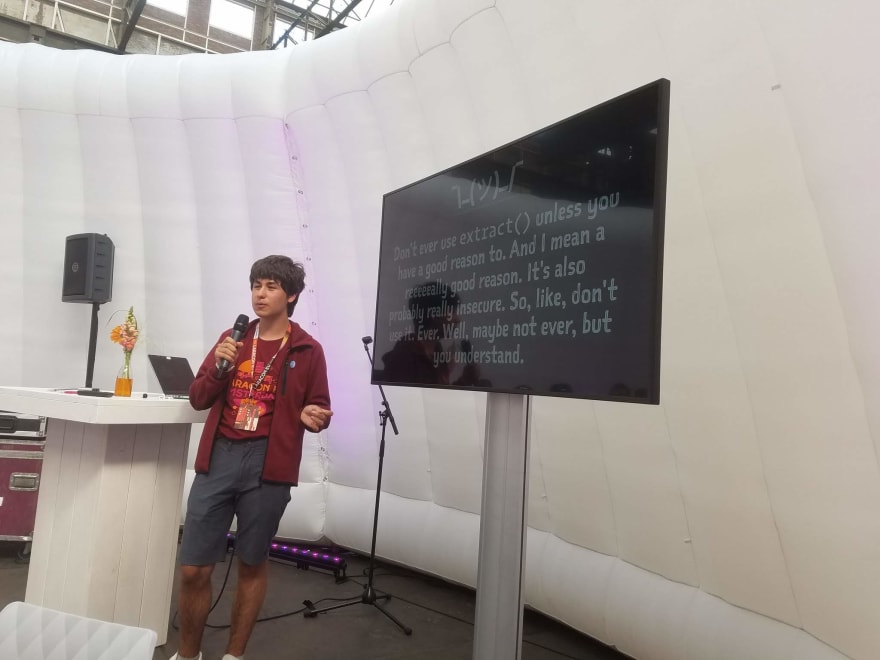 After my unconf talk, a break and another talk, it was finally time for the big reveal. Freek and Marcel went on stage to talk about Ignition, a Whoops replacement for Laravel 6.0 and Flare, an exception reporting service. It was an awesome presentation, and I'm hoping to write some cool Ignition extensions soon.

Then it was finally time for Taylor to close the conference with his keynote. He talked about all the new things coming to Laravel 6.0, and he mentioned my unconf talk because I spoiled some of his black magic. Sorry, Taylor! 😁

After the conference finished, I had dinner with a bunch of fellow artisans, including Taylor and David Hemphill. We talked about Vapor, Nova, Forge, Laravel Cloud, open-source & general cool stuff, joked around and tried to avoid getting our food raided with bees. 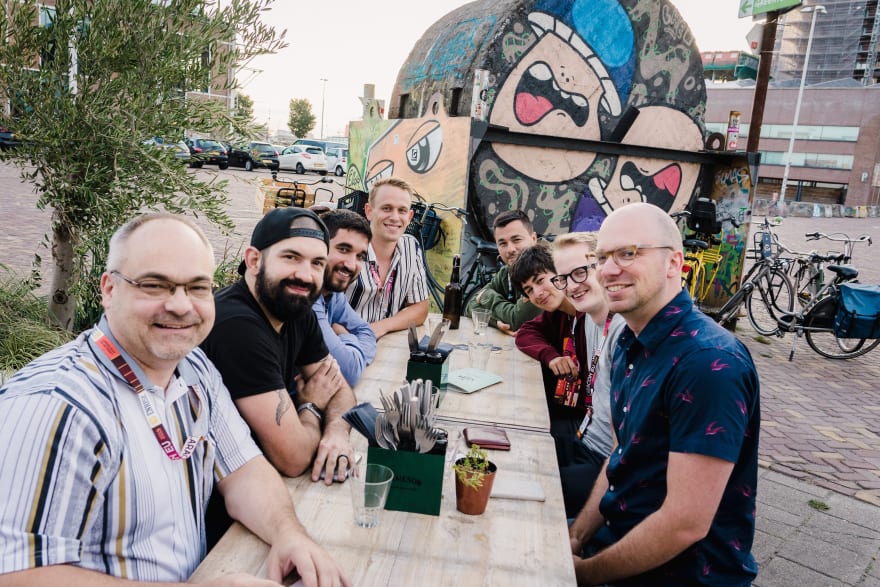 After that we headed to the After-Dark, where I had lots of great conversations with almost everyone that attended, and also got to meet and talk with Freek & Marcel, two people I strongly admire for their contributions to the Laravel community & open-source. I stayed there, talking with people until 1 AM, when my parents came to pick me up.

I had one of the best times of my life at this conference. The talks were great, everyone was incredibly nice, I met lots of great people & learned a lot of cool stuff. I hope I'll be able to come back next year (hopefully as a speaker, we'll see).

This article was first sent to my personal newsletter a day after Laracon. If you're interested in knowing what I'm working on and get insider info on my work, you'll probably want to join.

How to use Laravel Permission by Spatie in Vue

How To Get Hourly Data In MySQL Query

You should not interrupt Laravel's exception handling

Once suspended, m1guelpf will not be able to comment or publish posts until their suspension is removed.

Once unsuspended, m1guelpf will be able to comment and publish posts again.

Once unpublished, all posts by m1guelpf will become hidden and only accessible to themselves.

If m1guelpf is not suspended, they can still re-publish their posts from their dashboard.

Once unpublished, this post will become invisible to the public and only accessible to Miguel Piedrafita.

Thanks for keeping DEV Community 👩‍💻👨‍💻 safe. Here is what you can do to flag m1guelpf:

Unflagging m1guelpf will restore default visibility to their posts.