In this post, we are going to make a count up timer using Swift and SwiftUI. This will walk you through step by step from making a new app to running the finished timer.

The finished project can be cloned from GitLab here. 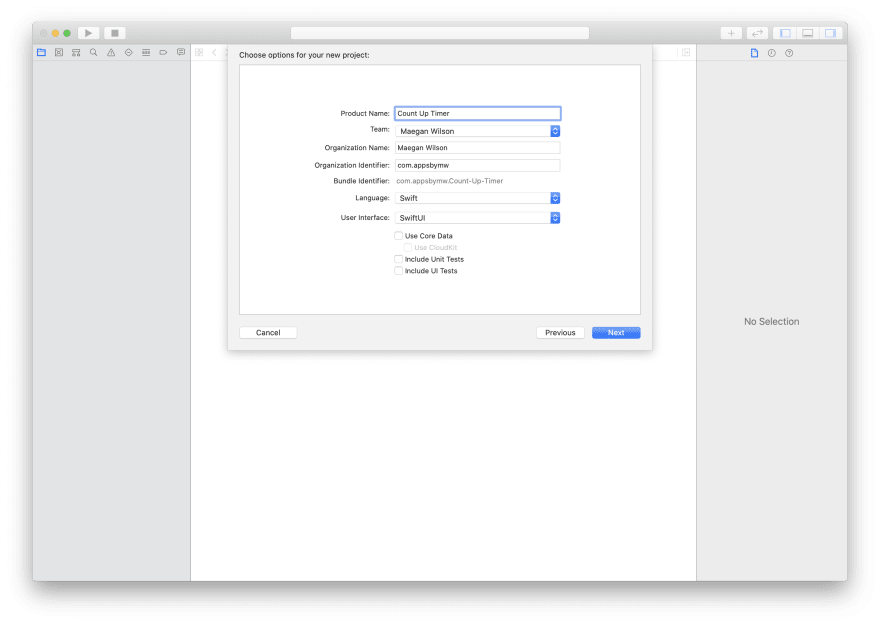 Let's add variables to hold the hours, minutes, and seconds that are needed to be displayed on the screen.

In ContentView.swift, add lines 6 through 8 in the gist below.

Now, let's actually design the UI. It's going to have the timer in the middle, then buttons to start/pause the timer and to reset the timer back to 0.

The first thing we need to do is add a VStack in the body. To do this, you can right click on the Text("Hello, World!") and choose Embed in VStack. Your code should now look like the gist below.

Then, we need to put the variabled in. We are going to change the Hello, World! to \(hours):\(minutes):\(seconds). If you open the Canvas and resume it, then you should see 0:0:0 in the device.

You might be asking why use \() around the variable name. The slash and parenthesis are needed to tell the compiler that there is code inside the parenthesis. Therefore, the program will display the contents of the variable and not the variables name.

Now, let's add the buttons and make them do something!

First, we are going to add a new state variable that signifies if the timer has started or been paused. Right after the declaration of seconds, add @State var timerIsPaused: Bool = true.

Then, after Text() we need to add an if statement that is going to show a view when the timer is paused and when it's going. The gist below shows what the view should look like with that if statement.

Now, we are going to change Text to Buttons and use SF Symbol for Start, Pause, and Reset.

If timerIsPaused is true, then we want to show a play icon for start and a backward icon for reset. To do this, we need to use the Image(systemName: String) as the Button labels. These two buttons also need to be in a HStack to be next to each other. Now, if timerIsPaused is false, we need to show a pause icon to stop the timer. The gist below shows the buttons in the if statement.

That's what it took to "design" this app in SwiftUI. Next, we are going to make the parts functional.

It's time to actually get the timer going. We are going to use the Timer that's buit into Swift. We will need to make a repeating timer that adds one second every second.

Let's add a variable for the state first, so after timerIsPaused, add @State var timer: Timer? = nil. This declares a variable to store the timer in, but doesn't actually store a Timer to the variable, yet, since we will call a new Timer when the timer starts.

Next we need to write a function that starts the timer and changed timerIsPaused to false. The function is going to be called startTimer(). In the function, add the line timerIsPaused = false. After that, a timer needs to be added, so the gist below shows that.

This is where a new timer is actually made. I'm using a scheduled Timer so that every second something can be triggered.

This is all the code to check when to increment seconds, minutes, and hours.

I chose to use the closure method of starting a new timer so that I didn't have to wrap the function in an objective-c caller.

Once the function is written, make sure to call it in the button. Here is what the Start button code should now look like.

Now, make sure to call the function when the Stop button is pressed.

Here is what ContentView.swift should look like at this point.

This is the easiest function. It's going to set hours, minutes, and seconds back to 0.

Now, call it when the reset button is pressed using self.restartTimer().

✅ The count up timer is done!

Now the count up timer is done. You should be able to run the app, start the timer, stop the timer, and reset it.

The completed project can be cloned from GitLab.

If you enjoy my posts, streams, and apps, consider encouraging my efforts.

Creating a simple browser for iOS

Get Started With JSConstraints - Programmatic Swift Constraints for Beginners

Once suspended, maeganwilson_ will not be able to comment or publish posts until their suspension is removed.

Once unsuspended, maeganwilson_ will be able to comment and publish posts again.

Once unpublished, all posts by maeganwilson_ will become hidden and only accessible to themselves.

If maeganwilson_ is not suspended, they can still re-publish their posts from their dashboard.

Once unpublished, this post will become invisible to the public and only accessible to Maegan Wilson.

Thanks for keeping DEV Community 👩‍💻👨‍💻 safe. Here is what you can do to flag maeganwilson_:

Unflagging maeganwilson_ will restore default visibility to their posts.