I remember exactly where I was when I first watched DHH's Blog in 15 Minutes video. At the time, I was mostly using PHP for my projects, and what I saw blew my mind. 🤯

The original "How to build a blog in 15 minutes with Rails" from 2005 aka the wups video: youtu.be/Gzj723LkRJY #RailsTurns10

I immediately became fascinated with Ruby on Rails. I spent the next couple years of my life working a Java job while learning Ruby on Rails on the side. Eventually, I learned enough to make the career leap from Java to Rails and I spent the subsequent 10 years working on Rails apps.

Recently, I had an idea for a side project, and I decided to build it with Hanami instead of Rails. I chose Hanami for a few reasons:

In this article, I'm going to show you some of the things I learned and really liked about Hanami.

The State of Mississippi provides a daily table with the latest counts of total COVID cases and deaths in each county. 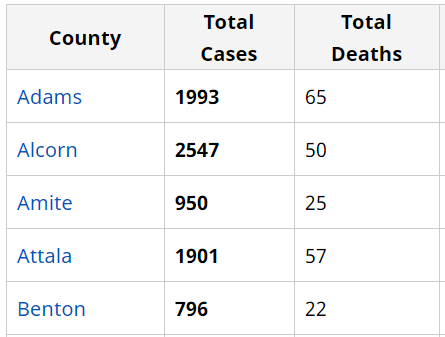 I decided to scrape the table each day and subtract yesterday's totals from today's totals in order to get the daily numbers.

I also stored the table each day so there is also a historical view of the data.

I stored the county name in a counties table and I had a second table called county_updates that looked like this:

I added a CountyUpdate entity that added a few calculation methods on top of the auto-mapped attributes.

One advantage of this approach is that your queries are isolated and easily testable.

In my app, I have a route that lists all of Mississippi's counties.

This class is invoked when the /counties route is hit.

Likewise, for the show route, there's a corresponding Show action.

Rails controllers are often cluttered and contain extraneous code that is relevant to only certain actions. For example, why is the code to permit params for the create action in the same class as the index action?

The Hanami approach adheres to the Single Responsibility Principle. You can be assured that any code in an action class is only relevant to that endpoint. It makes your actions dead simple to test.

I didn't fully understand how awesome apps are until I actually needed to create a second app. After a short exchange with someone on Twitter, I offered to make the data for this project available via API.

I generated a new app in app/api using the hanami generator:

Then I simply added a controller that rendered the JSON.

I had a functional API in minutes.

Unlike Rails, the API was purely additive code. I didn't have to touch any existing code to handle different content types. I didn't have to write any respond_to blocks. If I wanted to, I could've used two distinct queries for my JSON and HTML responses without branching logic.

My biggest takeaway from Hanami is that I felt like my code quality was improved over one of my typical Rails projects.

I've been using Rails for over a decade and sometimes I still struggle to figure out where I should put code. "Does this code belong in a model? At what point should I move model code to a service object?" I encountered this exact scenario on a Rails project recently. I moved a method back and forth between a model and PORO several times before making up my mind, and still wasn't happy with where it ended up. I eventually decided to cut my losses and just left it where it was.

I have not encountered such an issue in Hanami. It almost feels like the framework enforces code quality. It definitely feels like it makes it harder to write bad code.

There's not a whole lot of magic going on. The framework is there to guide you, not surprise you.

I was really impressed with the way this project turned out. There was a bit of a learning curve in some cases, but I was able to get over the hump. Hanami 2.0 is in the works and I'm excited to see what it brings.

If you're interested in checking out the app, it's running on heroku @ https://ms-covid-tracker.herokuapp.com/

Code is on github