CSS is a nightmare even for seasoned developers. A small property can change the entire flow of a website. So, here are some of the basic properties and rules to get started.

There are three ways to write CSS code. Inline, Internal, External.For all the same code written in all three, the hierarchy of code is,
Inline>Internal>External

Most common selectors are,
1. Tag (used to select the element with tag name)

Every single element in Css is made of box. You can style the margin, height, width, padding. 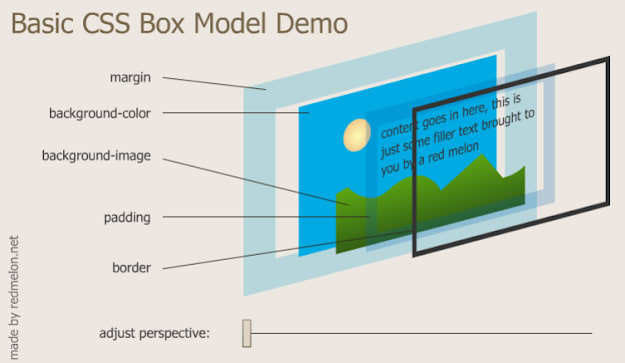 Padding gives space between border and content of element.

Display Property allows user to set the type of display box your element wants to be.

display: inline;
Inline property will take away the ability to change the width of box.

display: inline-block;
Inline block is a mixture of block and inline property.

display: none;
None property will remove element from document tree.

This is the default position of element.

Relative position allows you to move element relative to its original position. top, left, bottom, right property can be used to move it position. It only affects the particular element. Doesn't affect any other element.

Absolute position allows you to move element to the right or left to its parent element. This will only work if the parent element has a relative property. Parent doesn't always have to be the body. It can also be the closest parent.

Fixed element will stay in its current position even when scrolling. Mostly used for sidebar and navbar.

This is just enough bare enough to get you started with CSS.
Try making some static websites with this properties and you can also make your own css library.

CSS is endless, so get the basics right

Getting to know CSS specificity

Meet Tandel
I am a self-taught web developer using MERN stack to develop web apps including static websites.
An Honest Opinion About My Blog.
#disscus #programming #career #motivation
6 Use Cases for Regex in Your Daily Work
#webdev #productivity #regex #programming
What Makes You Stay In A Community?
#discuss #community #watercooler

Once suspended, meet_tandel will not be able to comment or publish posts until their suspension is removed.

Once unsuspended, meet_tandel will be able to comment and publish posts again.

Once unpublished, all posts by meet_tandel will become hidden and only accessible to themselves.

If meet_tandel is not suspended, they can still re-publish their posts from their dashboard.

Once unpublished, this post will become invisible to the public and only accessible to Meet Tandel .

Thanks for keeping DEV Community 👩‍💻👨‍💻 safe. Here is what you can do to flag meet_tandel:

Unflagging meet_tandel will restore default visibility to their posts.