I am a programmer with simple needs in regards to Vim, I need it to be Vim with and it should look nice. I've been using only basic plugins, mostly surround and some highlighting, for years now. One of the reasons for that is the fact I came from working on servers, so I don't have my .vimrc with me. Another factor is that I write a lot in Lua/Javascript, so there's not much I can get by autocompletion anyways.

Lately I've been working on some Typescript codebase, and a coworker was reviewing the code with me and we wanted to check the types of some object. It is not so nice without some tsserver to just tell us. So I've decided to go forth into the rabbit hole of Vim configurations once again.

I will skim over the TS configurations, mainly sharing some links and then go into the hightlight

There's a TL;DR at the end to get the bare gist.

God saw that the light was good, and he separated the light from the darkness

I use Mac at work, Yabai as a tiling window manager, Kitty as a terminal emulator, and bash as my shell.

I use terminal a lot, as a file explorer, running scripts and for text editing. I use light themes and I've been looking at my Solarized Light screen for over 3 years now.

I've picked a theme for Kitty,

This said little to me but I liked what I saw. Sometimes some texts were white, usually when running tests, but I would just select the text and read what it said.

When configuring the TS, I've followed this guide. I've had to install NVim, coc-tssever for that tsserver inategration and autocompletion and added some mappings

Especially the gs map, that should show me a little hovering window with the type of the object the cursor is on. Here was how it looked.

There was this little issue that the text I wanted to read was unreadble.
I've changed the theme to something else and it was alright but something else was broken. I want that CursorColumn and CursorLine (hightlihgts the row and column) but both were just white.

And here I started reading a lot about Vim highlights and color themes and all that, I will try to pass as much information but be as short as possible.

Off to a great adventure 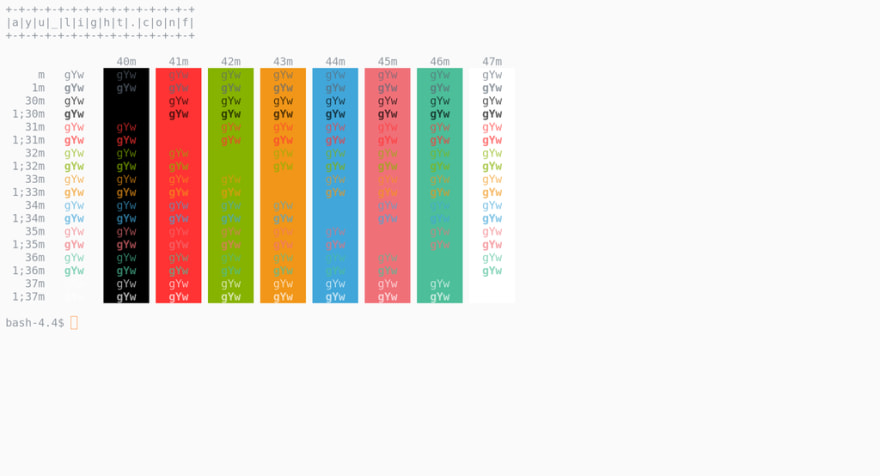 and it's generated by this tool

Basically it shows text colors and backgrounds, according to some 8 base colors. The column and row codes are some Ansi codes so you can use them in your bash customizations ;)

Using this theme I got the part more readable,

But then I wanted the cursorline and cursorcolumn to work well.

Here how it looks now,

Notice that the column is white, and the line is just an underline.

You can notice in the picture of the theme, that the default is grayish color, and the last column is white.

I recalled that 8 is a number that I've seen here already, and indeed, it was the number of pairs in the theme config.

According to the Kitty configurations, the color scheme comes in pairs, one color for the dark variant, and one for the light variant, and the last pair is the pair for white, dark white and light white.

So I've concluded, and checked the theme that the designer decided to set the "dark white" (gray) as white, #ffffff, same as "light white" (regular white).

So I've changed color7 to #d3d3d3 and now it looks great.

Regarding the line issue. I've read here about changing specific colors of specific things in Vim.

Hit :hi to see the table of all highlight rules,

The image also shows you how it would look <3. So I see that the CursorColumn has 2 values, ctermbg and guibg. Testing this a bit with different values, and reading this thread made me understand this:

So just to play with it a bit more, I've added 2 more colors in my theme

Then added this to my nvim/init.vim file (I miss just saying vimrc),

The Easy Way to Copy Text in Tmux

Once suspended, mkuts12 will not be able to comment or publish posts until their suspension is removed.

Once unsuspended, mkuts12 will be able to comment and publish posts again.

Once unpublished, all posts by mkuts12 will become hidden and only accessible to themselves.

If mkuts12 is not suspended, they can still re-publish their posts from their dashboard.

Once unpublished, this post will become invisible to the public and only accessible to mkuts12.

Thanks for keeping DEV Community safe. Here is what you can do to flag mkuts12:

Unflagging mkuts12 will restore default visibility to their posts.