Originally published at blog.mphomphego.co.za on Jan 17, 2020

It has been quite a while since I last wrote a post, but I had reasons. A few months ago I received an email from Udacity and AAL (African App Launchpad Program) detailing a list of scholarships I could apply for - based on my interest in Machine Learning and Deep Learning. 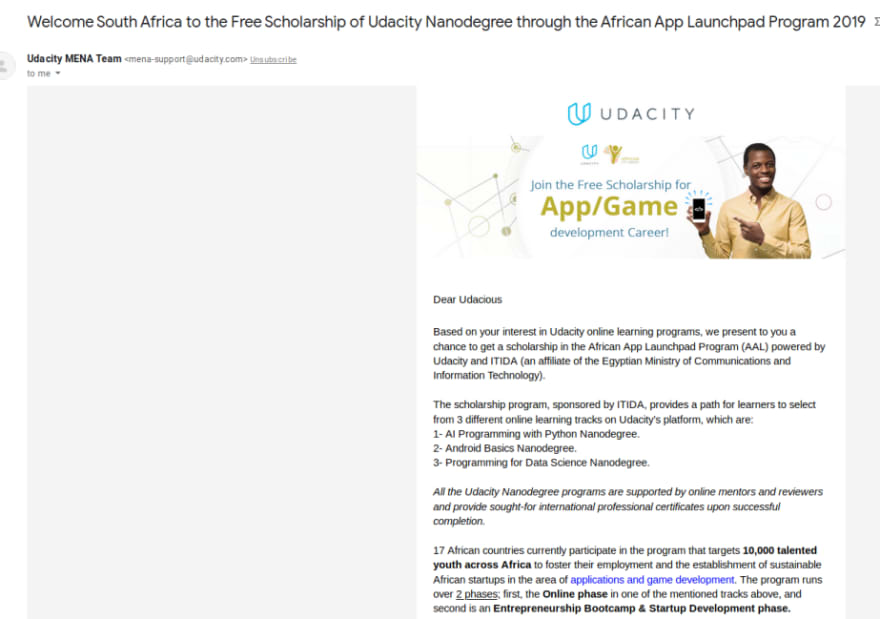 I have always had an interest in AI and Machine Learning, so when this opportunity came knocking I did not even hesitate so for obvious reason I opted to apply for the scholarship AI programming with Python Udacity NanoDegree. 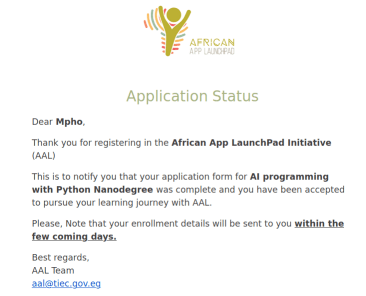 As part of the course, for someone to graduate/complete one has to complete an AI-based image classification project.

In this post, my focus will be directed to the final project that I needed to submit in order to receive the certificate. I had to build a state-of-the-art image classification application using PyTorch library.

It offers a diverse list of tracks one can apply for and receiver 100% grant for enrolment.

If you would like to register for the scholarship, and learn a new skill-set click here and on 'How did you hear about us' section click 'ALL/NTL Graduate' and enter my learner code such that I can get another grant.

The course comprised of a few lessons and a project to complete to receive a Udacity Nanodegree certificate.

The list below details the lessons/parts that I had to complete:

This lesson was more of an introduction to the course and what is expected of the student including some of the examples someone that acquired these skills would be capable of doing or achieving.

This lessons for me was a walk in the park as already I was skilled in Python and the modules listed in part 3.

I thought by having completed a degree in Electrical Engineering would add some advantage on part 4 but Noooooooo!
I realised that most of us while at University only studied to PASS and not study to know - Sad truth, with that said I needed to do some revision especially in differentiation and integration with focus on the chain rule and statistics.
It boggles me why we are not taught statistics in high school as we use it more than we use geometry but I suppose that is a discussion for another time.

Deep learning has several applications such as detecting spam in emails, forecasting stock prices even the weather, images or faces in pictures, medical diagnosis, self driving cars and many more.

Neural networks are considered to be the heart of deep learning. Neural networks vaguely mimics the process of how the brain operates, with neurons that fire the bits of information. A deep neural network (DNN) has lots of nodes, lots of edges, lots of layers, information coming and going through these layers.

The image above illustrates how a simple neural network does a good job classifying between cats and dogs. Let me explain some terminologies that lets us name all these different parts of the neural network above.

The leftmost layer in this network is called the input layer, and the neurons within the layer are called input neurons. The rightmost/output layer contains the output neurons as in this case, a single output neuron. The middle layer is called a hidden layer, since the neurons in this layer are neither inputs nor outputs. The term "hidden" simply means nothing more than "not an input or an output". The network above has just 4 hidden layers, but some complex networks can have multiple hidden layers this is called a multiple layer network (multilayer perceptrons) *

An image of a cat/dog is given as input to the neural network(classifier) that classifies the given image and then results in accurate output saying whether it is dog/cat - simple enough.

Building a neural network from scratch would be fun, but there is no point in reinventing the wheel. Therefore, we’ll use a pre-built and pre-trained model applying transfer learning.

The logic of transfer learning is simple and straight-forward, take a model that was trained on a large dataset and transfer its knowledge to a smaller dataset. For object recognition with a Convolutional Neural Network, we freeze the early convolutional layers of the network and only train the last few layers which makes a prediction. The idea is the convolutional layers extract general, low-level features that are applicable across images - such as edges, patterns, gradients - and the later layers identify specific features within an image such as eyes or wheels.

This part of the course helped me understand what is under the hood and helped me acquire a solid foundation in deep learning and neural networks which I used to build the image classifier project. I will not cover the course contents but the paragraph above details how AI and Machine learning kinda works.

A friendly introduction to Convolutional Neural Networks and Image Recognition

The last part of the course was more aimed at tools and how to use them. I learnt about techniques on how to improve the training of a neural network, and how to use PyTorch library for building deep learning models.

By the time I am writing this post there's currently 2 (two) open source libraries that are taking over the world by storm in the AI and Machine Learning field namely: Facebook's PyTorch and Google's TensorFlow.

The image above illustrates the constant growing adoption of PyTorch, this is mostly due to researchers and students as it is easier to use (It is more Pythonic), while in industry, Tensorflow is currently still the platform of choice.

The walk through continues in My Experience And What I Learned From Udacity AI Programming With Python Nano-Degree: Part 2.

What is data drift & how it's useful?

Getting started with GitHub Copilot in Visual Studio 2022

Easy ChatBot with Open-AI in JS