I am really a big fan of Visual Code and use it as my main IDE for software development. The available selection of extensions (see the Extension Marketplace) is amazing.

As I started using Visual Code I found every extension I was looking for. But last week I stumbled upon a feature where I could not find an extension for. So I decided to write my first VS code extension and let you know about my experiences during the development.

The problem I wanted to solve

Currently I am doing a lot of Angular development and therefore use Jasmine for unit tests. My first IDE which I used for web development was WebStorm which is based on IntelliJ IDEA. In WebStorm I often used and liked the plugin ddescriber for Jasmine tests:

This is a nice feature but I often used the plugin to list all available specs and then jump to certain describe() or it() block:

Just type Ctrl + Shift + D (Command + Shift + D on a Mac) to launch a dialog that lets you choose which suites or unit tests you want to include or exclude.

This is useful in large unit tests which includes many describe() or it() blocks.

What the extension should handle

The first version of the extension should be able to:

Big applause to the VS code team for the amazing documentation on how to build your own VS code extension.

It is really easy to grab one of the example projects or create a new one using Extension Generator and get started. Additionally it is very easy to run and debug your new extension.

Searching through the Extension API documentation I found this method

which functionality is described as:

It looks this way in VS code if it is called:

So this sounded like a good opportunity to list all test blocks and provide a way to receive the selected value.

So basically I had to implement these steps:

The final output for a Jasmine test file looks like this: 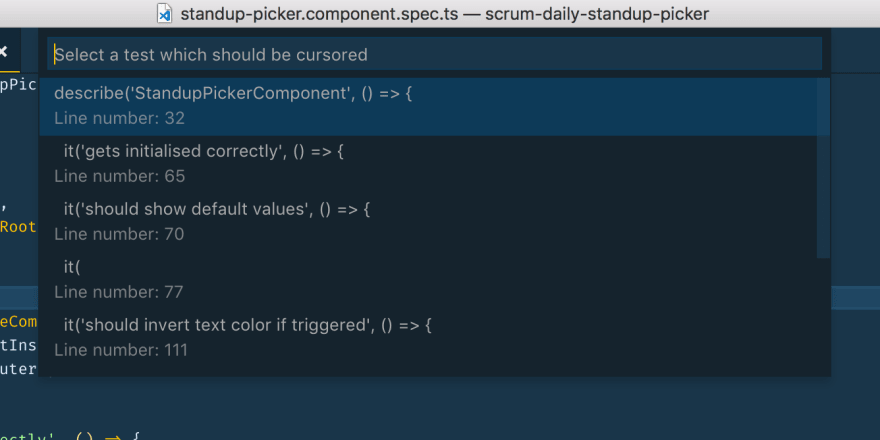 Another very nice experience was the very easy publishing process for VS code extensions. Basically I had just to follow the official documentation which requires an Visual Studio Team Services account.

The published extension is available in the Visual Studio Code Marketplace.

In summary it made a lot of fun to develop a VS code experience. The documentation and the provided examples are very good and I am very happy to have added a functionality to my favorite code editor which I have been missing.

Freelance software engineer from Germany with focus on Angular

Open project in finder from Xcode