Measuring the coverage of unit tests is an important topic because we need to check the design of the tests and the scope in the code of them.

Coverlet is an amazing tool to measure the coverage of unit tests in .NET projects.

Coverlet is completely opensource and free. it supports .NET and .NET Core and you can add it as a NuGet Package.

Coverlet is a cross platform code coverage framework for .NET, with support for line, branch and method coverage. It works with .NET Framework on Windows and .NET Core on all supported platforms.

N.B. You MUST add package only to test projects

N.B. You MUST add package only to test projects

Coverlet is integrated into the Visual Studio Test Platform as a data collector. To get coverage simply run the following command:

After the above command is run, a coverage.cobertura.json file containing the results will be published to the TestResults directory as an attachment. A summary of the results will also be displayed in the terminal.

First, we have to add the NuGet within an existing unit test project (MSTest, xUnit, etc..). Coverlet has many ways to use it but I recommend to use MSBuild.

after that, we can use easily the integration between MSBuild and coverlet to run the test and measure the coverage with the following command:

you will get the following result: 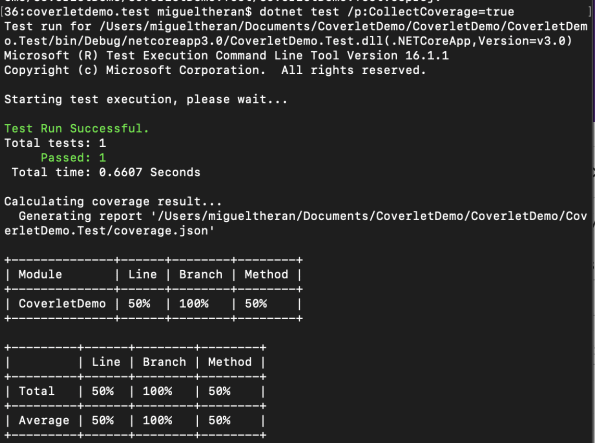 In the first column from left to right we can see the list of modules covered. In the column 'Line', we get the percentage of lines checked after running the tests and it's the same for 'Branch'(statements) and 'Method'(functions inside the classes).

Coverlet generates a file coverage.json that contains the whole information displayed in the console. You can consume this file with your own application.

Once suspended, mteheran will not be able to comment or publish posts until their suspension is removed.

Once unsuspended, mteheran will be able to comment and publish posts again.

Once unpublished, all posts by mteheran will become hidden and only accessible to themselves.

If mteheran is not suspended, they can still re-publish their posts from their dashboard.

Once unpublished, this post will become invisible to the public and only accessible to Miguel Teheran.

Thanks for keeping DEV Community 👩‍💻👨‍💻 safe. Here is what you can do to flag mteheran:

Unflagging mteheran will restore default visibility to their posts.