Cucumber and Selenium are widely used frameworks for BDD(Behaviour Driven Development) and browser automation respectively. Although on paper, it seems like a nice pair but when it comes to reality a lot of testers shy away from it. The major reason behind this is Gherkin as most testers hesitate to use it as it feels like an additional task since the test scripts are still to be written separately.

But this is not true for all. Using Gherkin can actually help in testing as it serves as a good document for all the features and can be written by anyone even with almost zero coding knowledge.

Clients say, “Cucumber benefits us to understand the application code as it uses Gherkin language which is in Plain Text.”

Being written in Gherkin, it acts as a bridge between various layers, PMs – Dev – Testers – Clients. Let us move towards understanding BDD with Gherkin and how it can make Selenium testing better.

Behavior Driven Development or popularly known as BDD, is a widely used development approach in the software industry as it empowers its user to write cases in plain english language. This helps team members even with no technical know-how to understand what is going on in the project that closes the gap between business people and technical people

In addition to low technicality and easier to understand approach, main advantage of BDD is that it transpires from TDD ie. Test Driven Development, which supports automated testing with multiple test data with minimum intervention in code.

Cucumber – A BDD Framework Tool: BDD is implemented with the help of Cucumber framework which helps in automating the cases in a well formatted and readable form.

Cucumber feature files: These files written in Gherkin language ending with .feature extension are an integral part of Cucumber and are used for application specifications.

Getting Started With Gherkin For Selenium Testing

Now that you know what BDD is let’s get started with Gherkin for Selenium Testing.

Gherkin is a Business Readable, Domain Specific Language which entitles its users to write effective

Let us understand this with a Gherkin example.

“Buyers should not be able to fill invalid credit card details.” Versus “On the payment page, If a buyer enters a credit card number, that is not 16 digits of length, then when they try to proceed, it should give an error message pop up stating that the entered number is not correct.”

The first Gherkin example is unclear and vague in comparison to the second one. Vagueness leads to errors and makes it harder for the tester to understand the requirement and implement test cases.

File structure in Gherkin is defined by the way different lines of code are indented in a feature file. Almost all lines in Gherkin for Selenium Testing starts with a special keyword and line endings terminate statements which are called as steps.

A Gherkin feature file is a combination of features, scenarios and steps which generally looks like this:

When executing the feature, the trailing portion of each step (after keywords like Given, And, When, etc) is matched to a regular expression generally called as glue code and can be written in any language. In this tutorial, JAVA will be used for the same.

Feature keywords are used to donate a software feature. It usually contains a list of scenarios linked to that feature. Main elements of feature are :

As a good Gherkin coding convention it is highly recommended that one feature makes up for one *.feature file which in term is named by replacing spaces with underscore and converting feature name to lowercase. Let’s take a Gherkin example,

Feature : In order to learn Gherkin as a beginner I want to study this tutorial Feature file name : in_order_to_learn_gherkin_as_a_beginner_i_want_to_study_this_tutorial.feature

It is usually used to add some context steps that are common to all scenarios and needs to run before each scenario in a single feature file. It is like an untitled optional scenario

Scenario makes the core of Gherkin structure. It describes the functionality that is under test. Main aim of a scenario is to be able to make the viewer understand what is being tested and how. The scenario keyword is followed by an optional title.

Steps basically make up the part of a scenario by means of given, when, then.

The sole purpose of a Given statement is to give a context in order to establish a known state before the user starts interacting with the feature scenario under test.

This is used to describe the event due to user actions in a given state.

The purpose of then step is to describe and analyse the outcomes. This analysis aims to add benefit to features by verifying the outcome that is or is not related to Given and When or may be to some external system.

These keywords are used to combine several Given, When or Then statements helping to make the scenario to be more readable and presentable.

To make a gherkin project for Selenium Testing, the easiest way is to create a new maven project in any IDE like Eclipse. Also the dependencies for Cucumber, Selenium and Junit runners to execute the feature files.

for using Cucumber with java

Why Use Gherkin With Selenium Testing?

Selenium is a widely used tool for functional testing across top organisations as it is easy to integrate with Gherkin and makes understanding and automating of the flow both easy and possible to be done at same time.

By doing so one makes it easy to maintain test cases which also serves as proper documentation for all the Stakeholders and Analysts. Selenium being easy to integrate and a widely liked automation tool adds up to the usage of Cucumber. Together they make up a framework which is very easy to set up and has low maintenance cost.

Moreover, the ability to run feature files parallely is another advantage. Also, both Gherkin and Selenium can be coded in Java for writing the glue code for steps and browser automation respectively.

Benefits Of Gherkin In Selenium Testing With Example

Here I will explain the usage of Gherkin for Selenium Testing with some examples and the framework along with file structure by means of the following example.

Let’s take a test scenario with development of a web application for an organisation, let’s say ’Shopping.com’, and the team is discussing a process flow of order placement by a customer.

First Step, for a customer to place an order, he/she should navigate to the website and login.

After the flow is passed on to the automation tester, he uses it to write automation cases. Further, he adds automation code steps for the discussion file by converting it to a feature file.

Now the point to note here is that there would be some data related to customers that is required and might be used by other feature files and scenarios as well. So it makes sense to create a separate file for such data called a properties file.Also, steps like loading this property file, initialising the driver, closing the browser after each scenario also needs to be done and this would be common to all tests. So it makes sense to create a base steps file and inherit that to all step definition files.

Finally, step would be to a runner file to run this feature.

So with this example it is quite evident how easy it is to use Gherkin for Selenium Testing to make automation better.

In order to execute the Selenium automation over an Online Selenium Grid, you just need to update the BaseSteps.java to have the LambdaTest account username and access token along with few code changes to let the the system know that it will a RemoteWebDriver running on LambdaTest grid url with these capabilities.

Execute the test same as earlier using the TestRunner file and you are good to go with added advantages of using Selenium grid and get more information about the execution in a more presentable form.

After you’ve completed the tests, you can further keep track of all your automation scripts using LambdaTest dashboard. Here in the Automation tab you can see the Timelines, Analytics, and Automation Log of all the tests you’ve run and the different builds used in the tests.

You can see all your tests under the Automation Log, here you can see the summary of your tests, any exceptions encountered, track commands, network and metadata. You can also create issues and share it with your team on the preferred Project Management tool.

You can even utilise LambdaTest platform to perform Cross Browser Testing over 2000+ real browsers & browser versions. On LambdaTest dashboard you get an overview of all the tests and activities done so far along with available integrations. You can see the number of tests run via automation by using real time browser utility, concurrent sessions, date of execution and much more. 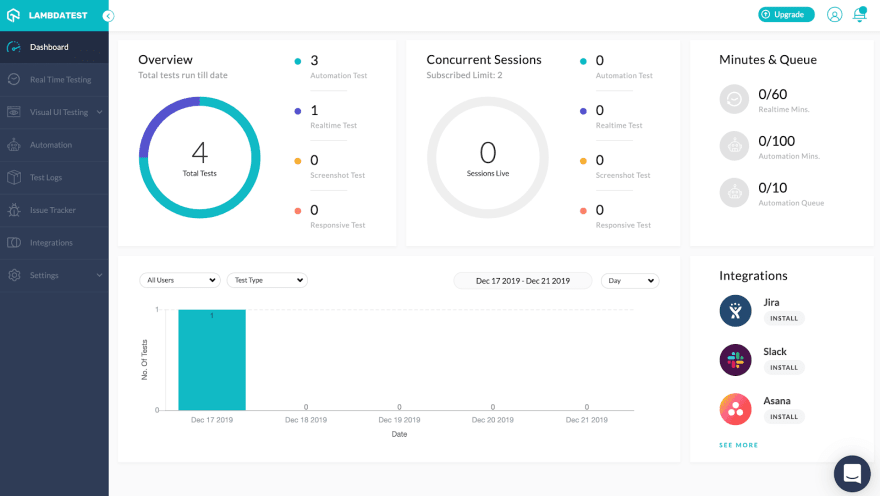 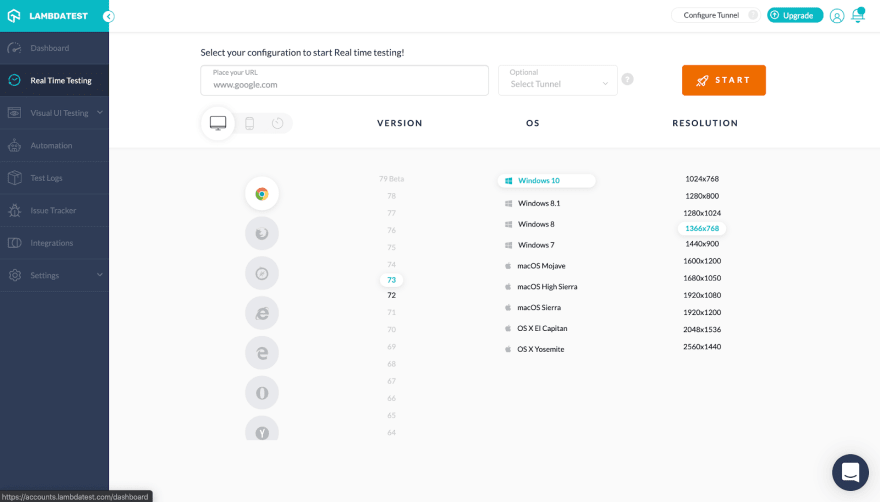 By using Realtime Cross Browser Testing panel, you can execute tests on over 2000+ real browsers & browser versions by just simply selecting from the available list. 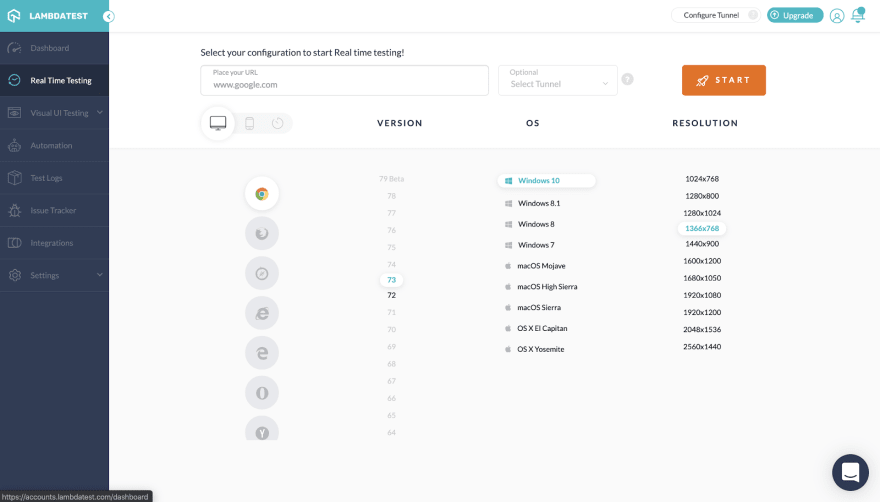 In Visual UI Testing, users can compare screenshots on multiple combinations of OS and browser combinations. 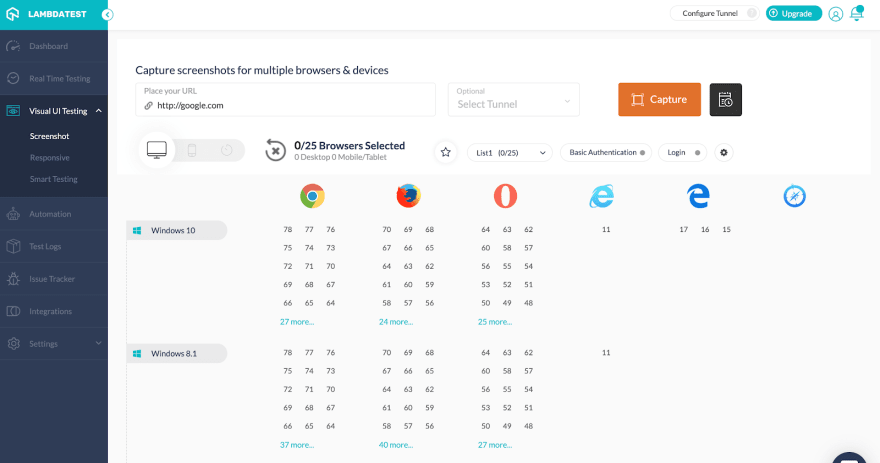 It also provides features to test across different UI for responsiveness depending on different screen sizes and resolutions. 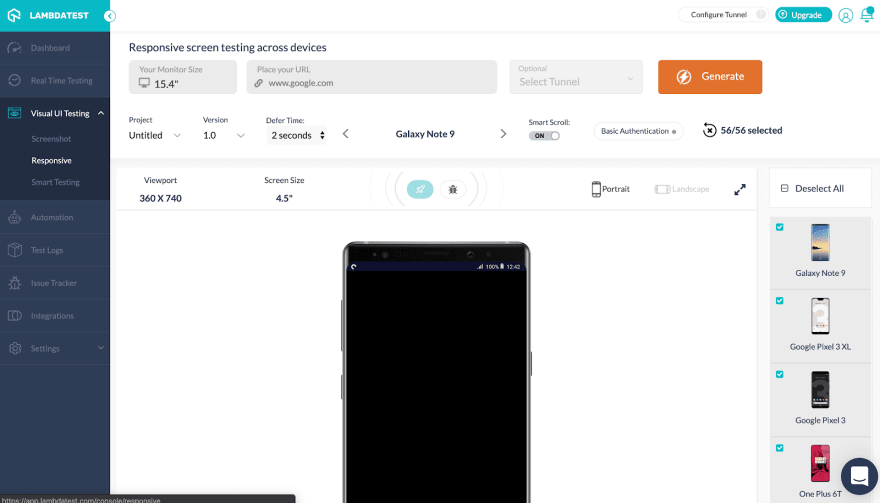 You can even add issues or bugs at the same time when you encounter them and track them in the Issue Tracker. 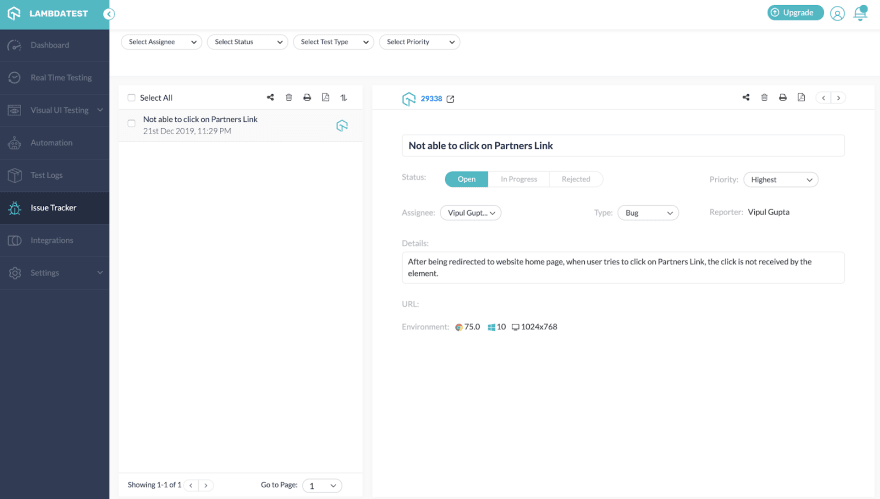 With integration on more than 30 bug tracking, CI/CD, Project Management tools you can share the bugs with your team on the go.

In this tutorial I explained how using BDD framework like Cucumber with Gherkin can help in better collaboration among all the stakeholders along with the basics of Gherkin language and how to use its syntax. Then I went on to develop our first Selenium test automation script using Gherkin for Selenium Testing.

Now you know why you shouldn’t shy away from Gherkin for Selenium Testing. Also, how it can help all the stakeholders in your team have a strong understanding of the project. Thereby helping the project achieve its business goals faster.

🗞️ We have just released our JBang! catalog 🛍️

Once suspended, nategrey will not be able to comment or publish posts until their suspension is removed.

Once unsuspended, nategrey will be able to comment and publish posts again.

Once unpublished, all posts by nategrey will become hidden and only accessible to themselves.

If nategrey is not suspended, they can still re-publish their posts from their dashboard.

Once unpublished, this post will become invisible to the public and only accessible to Nate-Grey.

Thanks for keeping DEV Community 👩‍💻👨‍💻 safe. Here is what you can do to flag nategrey:

Unflagging nategrey will restore default visibility to their posts.