This article is originally posted here. Checkout the article and related articles here.

For the people who are very much in the Rails development, you definitely should've used Activeadmin on one of your projects. If not, please have a look at it. It is an amazing gem ran by a very understanding community.

For those who aren't familiar with Rails, this gem provides us to build admin controlled management side for the models present in the application quickly. Provides set of conventions and working along those lines, you can quickly get your admin dashboard ready. For Django-familiar people, it is similar to django-admin.

ActiveAdmin is holding off on pulling Mongoid support into the core ActiveAdmin application. Maybe in future activeadmin will provide support for NoSQL directly through its gem.

This gem's repo was pulled into the ActiveAdmin org from previous work done by Elia Schito. Currently, it is maintained by Grzegorz Jakubiak, Nic Boie, JD Guzman, Elia Schito and other ActiveAdmin and community members.

Quick technical glimpse about the activeadmin-mongoid

Mongoid based Rails projects mostly won't require activerecord in their model methods and also wouldn't need any migration because we aren't dealing with the usual ideas of the SQL world.

Similarly, activeadmin-mongoid as a gem also avoids to require Rails's activerecord related elements. This is something to be considered when introducing any new additions to the gem. (atleast at the time of writing)

What was the issue

So like we mentioned, db migration is valid in the world of SQL (within our context of explanation), but considering with Mongoid, that file is completely unnecessary and users were deleting them after it gets generated because it makes no sense and no use.

One user pointed that out and raised an issue on that. https://github.com/activeadmin/activeadmin-mongoid/issues/137

So I was a little bit curious to try solving that out. There were little discussions went on the thread and Nic Boie, one of the maintainers gave it a shot and added what he tried and what was the result. That helped me to set the first direction towards solving the issue. Thanks to Nic!

Ideally, Nic Boie's solution solved the problem. It stopped the command from generating the migration file. But, while trying to open the class and override the method to make it do nothing, he has to require certain files and these files required has dependent requires and one of them brought in the activerecord related files. So, now my task is to do the exact thing what Nic did, but without letting the activerecord getting required through any dependent calls or so.

This is the solution Nic provided

Reading through the activeadmin gem

So, I took my time to read through the activeadmin gem and see for the class that Nic used above to override with class_eval.

Studying the class ActiveAdmin::Generators::InstallGenerator from here helped me to understand that the current class is the one which requires activerecord related files, but the parent class of this class doesn't requires any of those.

So the solution I came up with was, to go change the parent class of ActiveAdmin::Generators::InstallGenerator to do the following:

Ruby has a wonderful hook on class called inherited which will be called when a class is used by another class to derive itself. Using that inherited you can control specific way of the derived class. Cool, isn't it? I even tweeted about it here https://twitter.com/nav_devl/status/1405329547701096452

Again, Ruby as charming as always, provides us with a hook called method_added and this is called every time a new method method definition is added to a class. Now can you see where we are heading towards?

So we are going to combine the advantage of self.inherited and self.method_added 🤯

So, now our next set of action is very simple. 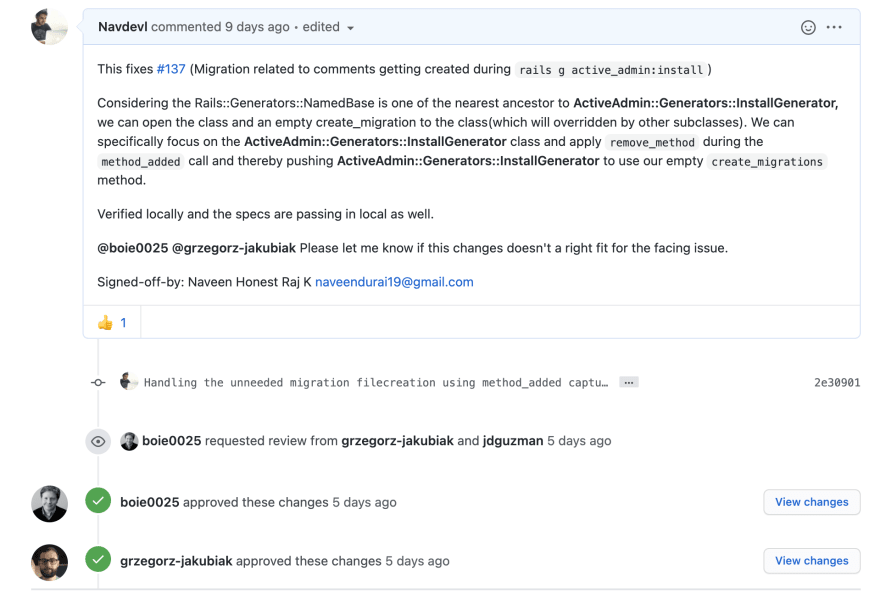 This is my implementation and the PR is here (https://github.com/activeadmin/activeadmin-mongoid/pull/164) It is yet to be merged. 2/3 reviewer approved and hopefully I think it gets approved and merged.

The advent of tooling for Big Rails

You Don't Have Write Permissions For the /library/ruby/gems/2.3.0 Directory

Once suspended, nav_devl will not be able to comment or publish posts until their suspension is removed.

Once unsuspended, nav_devl will be able to comment and publish posts again.

Once unpublished, all posts by nav_devl will become hidden and only accessible to themselves.

If nav_devl is not suspended, they can still re-publish their posts from their dashboard.

Once unpublished, this post will become invisible to the public and only accessible to Naveen Honest Raj.

Thanks for keeping DEV Community safe. Here is what you can do to flag nav_devl:

Unflagging nav_devl will restore default visibility to their posts.