This is going to be a multi-part article about Laravel Sanctum (previously known as "Airlock"), the new Laravel authentication system. I've played with Sanctum a lot in the last few weeks and it appeared to me that while the package itself works really well and does exactly what it says it does, there are A LOT of ways things could go wrong. And yes, it's almost always user error, but it can be incredibly hard to debug and find out what you missed unless you have a basic understanding of what's going on, which is what we'll try and get here.

Note that this is not a complete tutorial (that may come later), so you will still need to read the documentation along with this article

Things to know before you start

Most of this is in the docs, but it's really important so I'll summarize here :

So here's a diagram of what happens when your SPA authenticates to your backend : 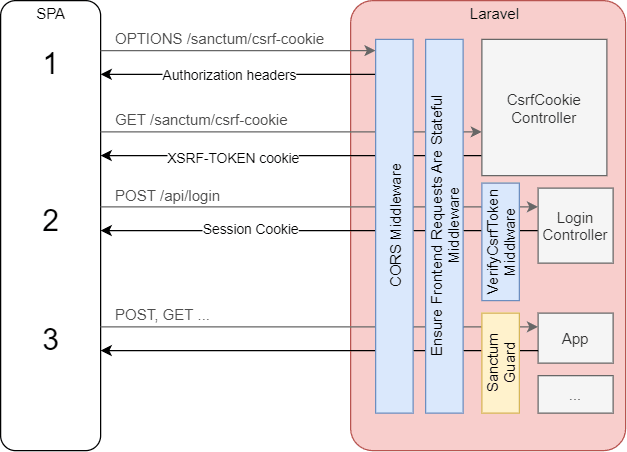 It's a little dense, but let's see what happens with each step :

1 : Getting a CSRF token

Although our cookies should be pretty safe, we still don't want to risk a malicious website tricking a user into logging in, so the login route (like all POST routes) is protected by a CSRF token. In a typical page with a form the token is served with the form and injected in a hidden field, but of course our SPA cannot do that, so we'll have to get it manually. Sanctum provides a /sanctum/csrf-cookie route that generates a CSRF token and return it, so the very first thing we need our SPA to do is make a GET request on that route

1a : Dealing with CORS

Since our frontend and backend are on two different subdomains, there's no way the browser will let us make some ajax request without some kind of verification, so the first thing that happens is that it makes an OPTIONS request. If everything is configured correctly, the HandleCors middleware will intercept the request and anwser with the correct authorization headers.

If you notice that your SPA sends an OPTIONS request and never tries to send a GET request look no further, your CORS settings are not properly configured.

After dealing with CORS the GET request will actually go through, and Sanctum will return the csrf token. Or rather it will return an empty page with an XSRF-TOKEN cookie.
This cookie is not supposed to be used as-is, what your SPA should do is read it, and then put its content into an X-XSRF-TOKEN header when it makes a POST request to login. This is a convention that's used by several frameworks and libraries including Axios and Angular, but you can also do it yourself. Note that Angular is a little picky about this header.

Now we can log-in. Once again the HandleCors middleware will do its magic, and then the EnsureFrontEndRequestsAreStateful Middleware will (as its long name implies) make sure the request creates and uses a new session. This middleware will only be triggered if the domain name of your SPA is listed in the SANCTUM_STATEFUL_DOMAINS variable of your .env file, so make sure it's correctly configured.

If everything works, a new session will be created and the corresponding cookie will be returned.

Also, the documentation recommends you use scaffolding, but it seems to me that it defeats the purpose of making an SPA. You don't want your typical redirect to /home either, so you can make your own LoginController with a very simple login method like that :

3 : making requests to your app

From there on, you're SPA is connected like any stateful application. You can use the sanctum guard to protect routes and it will check that the user of the SPA is correctly authenticated.

That's it ! I hope this can be useful to someone. In the next weeks I'll do a complete write-up on how to use Sanctum with an Angular SPA, and with an Ionic App.

Also if you have any trouble with Sanctum, feel free to leave a comment and I'll try to help !

Role And Permission In Laravel 9 Tutorial

Use PHP to generate table of contents from heading tags

How To Generate PDF Using DomPDF In Laravel 9

How To Use Sweet Alert In Vue JS

Nicolas Bailly
Hey, that's me !
Are PHP objects passed by reference ?
#php #oop #beginners
How to properly retrieve Laravel models between two dates
#php #laravel #mysql #webdev
How the new 'One Of Many' Laravel relationship made my project 600 times faster
#laravel #php #webdev

Once suspended, nicolus will not be able to comment or publish posts until their suspension is removed.

Once unsuspended, nicolus will be able to comment and publish posts again.

Once unpublished, all posts by nicolus will become hidden and only accessible to themselves.

If nicolus is not suspended, they can still re-publish their posts from their dashboard.

Once unpublished, this post will become invisible to the public and only accessible to Nicolas Bailly.

Thanks for keeping DEV Community 👩‍💻👨‍💻 safe. Here is what you can do to flag nicolus:

Unflagging nicolus will restore default visibility to their posts.