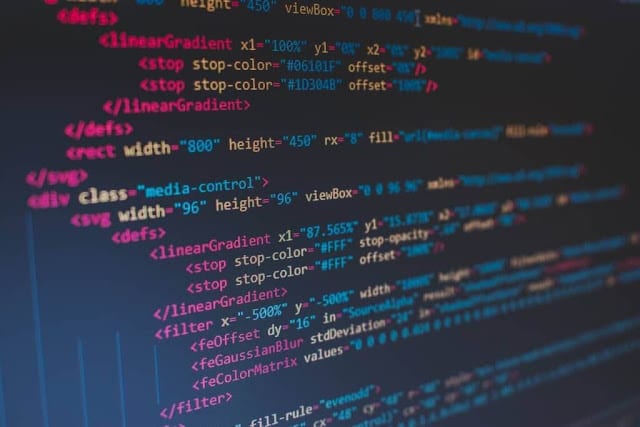 Let's start talking about what actually is angular forms first, then we will dive deeper into template-driven form.

Generally, in every frontend applications, forms play an important and inevitable part. This statement is especially true for huge, enterprise-grade applications. Sometimes, users need to fill out a form that consists of multiple tabs.

To solve this need to handle forms properly, angular provides powerful tools; angular forms. That comes as a built-in feature when we build any angular application from scratch. We don't need to rely on third-party packages to work with angular forms.

So if anything goes wrong while the user fills out the form, they must be notified what is the reason that causes that problem. To tackle that situation angular itself provides two approaches.

What is Template Driven Form in Angular?

You can think of a template-driven form similar to an HTML form. The only difference is that in this type of form, we need to use angular specific directives, events, etc. In this approach, we define the actual template that we want to use in forms. That's why this approach is called a template-driven approach.

As the form is primarily defined in the template layer, it also means that the validation errors are managed through the template.

To clearly understand the actual inner-working principle behind template-driven forms first, you need to be familiar with two terms which are as follows.

What is FormControl in Angular?

As per angular's official docs: FormControl tracks the value and validation status of an individual form control.

Basically, FormControl is a class that inherits the AbstractControl class in angular. This class can perform various tasks, such as accessing the value, act according to how the user interacts with the form, respond as per the events occurred while the user fills in the form, etc.

So, for each input field in our form, we need to create an instance of the FormControl class. With the help of this class, we can check different things.

For example, we can get the value of the input field, we can check if the content of input field has been changed or not, we are also able to check if the field contains a valid value or not.

If we found that the field doesn't have valid values, we can display validation errors for that particular field.

There exist different properties in FormControl. These are as follows.

What is dirty in the Angular Form?

Simply saying, by the term "dirty", angular is able to detect that the field's content has been changed by the user.

What is Pristine in Angular?

In simple words, "pristine" tells angular that the field's content has not been modified by the user.

Ok, then tell me about touched and untouched

At a glance, you may think that the term "touched" means that the user has not touched the form-field. Yeah, you are right!

In terms of programming, "touched" means that the user has placed the focus on that particular field. By the term "focus" I mean the user puts the cursor blinking in that field so that he or she can start typing content there.

I guess I don't have to discuss what "untouched" means.

In one sentence, all the errors that result after the user fill out the form are stored in the error object. These errors are stored in form of key-value pairs. In which the field name itself is the key and the error message is the value for that corresponding key.

What is Form Group in Angular?

According to angular's official website: FormGroup tracks the value and validity state of a group of FormControl instances.

Let's discuss what is form group and its purpose. FormGroup is a class that represents a group of controls in a form. Each of the forms refers to a form group.

Let's assume we want to build a checkout form for an e-commerce store that takes the user's first name, last name, address, etc. under the Billing Info section. Then in Payment Info section user enters details such as the name on the debit card, card number, expiry date, CVV number, etc.

Please note that angular material is used to build the user interface of this application. If you don't know about it, you can check out this article here.

Following is the screenshot of the app. 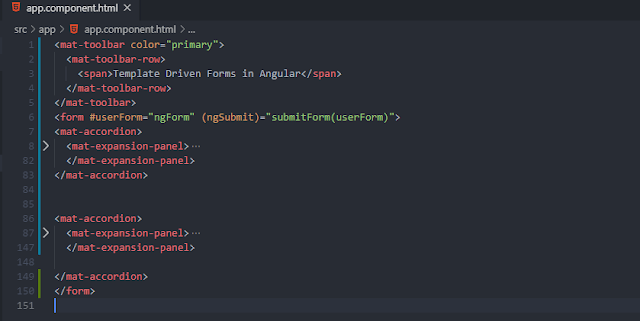 In the above code snippet of the app.component.html file, we have created two expansion panels. The main purpose of it is to represent similar form elements together as a single entity. First of the panel will hold all billing information, while the second one will hold all details regarding the payment information that the user will provide to make the payment.

We also applied a directive called "ngForm" that is provided by angular automatically. Its main purpose is to keep track of the form's overall validation status. But, under the hood, it creates a FormGroup instance at the top level.

We want to properly handle the validation for each individual form elements. To achieve this, we have created a template variable "userForm" and assigned ngForm to that variable. After doing that, we are able to get values for properties like dirty, touched, pristine, etc. 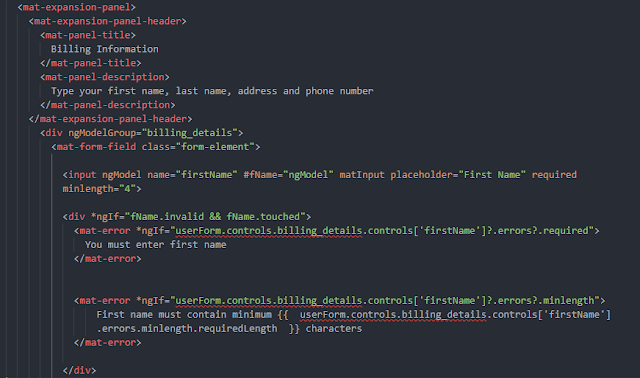 Here, we have applied a "ngModel" directive to the input field that asks user to enter his or her first name. In template driven approach, angular will create a FormControl object and associate the input field with that object.

Later, we want to make sure that if user did not fill up the first name, the user will be notified that he or she forgot to do so. For this purpose, we have created a local reference variable called "fName" and stored "ngModel" in that variable.

We are using HTML5's built-in "required" validator. Then with the help of ngIf directive, we check to see if first name field has focus and it is invalid. If these conditions are true we set the show user a message "You must enter first name".

With the help of angular material element, we checked to see if "firstName" input field contains any required type of error or not. Here the question mark ("?") symbol denotes optional property. We used it to indicate if errors property exists then we want to make use of that property.

Now, you may wonder why "ngModelGroup" directive is used. Let's explain the main role of it. Sometimes, we may need to send a complex object to the back-end after submitting the form. For this purpose, angular make use of this directive.

For example, in this example, we want to send billing information as well as payment information to the back-end. Under billing, we have fields such as first name, last name, gender, etc. Inside payment, we have card number, CVV number, etc. 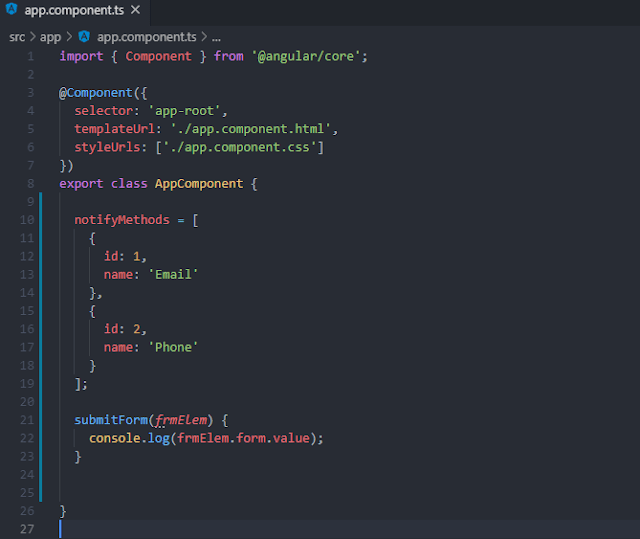 Here, we are handling the "ngSubmit" event emitted by the "ngForm" directive. We simply wrote the code to display the submitted data in the browser's console window.

The screen-shot of the submitted data is shown below.

I hope that after reading this article on angular template-driven forms, you have a clear concept in it. If you have any doubts, you can ask me questions. If anyhow this article proves beneficial to you, please share it among others. Thank you!