It has been a pain point for Android developers all over the world. It is no brainer that, most of the times the main cause of a memory leak in the codebase is because an invalid state is accessed which is out of sync with the lifecycle of the activity/fragment of the app. What this means is that as an Android Developer you are forced to put up a lot of checks in place, making sure that your code state is in sync with the lifecycle of the Activity/Fragment.

Things start to get a bit more messy when that is something you expect from others to do, which is the case when you are an Android Library Developer. As an android library developer, you need other app developers to conform to unregistering callbacks/call cleanup methods or specific functions to re-initialize at certain points in the lifecycle of Activity/Fragment.i.e onDestroy(), onResume(), onCreate(), etc.

Now that is a lot to expect and ask for. We all know developers tend to avoid going through documentations (..to build features quickly and achieve deadlines, obviously ðŸ˜… ). So what that means is sometimes the cleanup part is missed or not understood quite properly for them to put in the right places in code. For example, if an Activity receives a callback after it’s been stopped, then it’s pretty likely that your app is going to crash due to memory leak. Unregistering the callback is right before the Activity is destroyed is what is the needed, which is possible if the app developer calls the cleanup() method from your android library, but it is expected of them. You cannot make sure that they will conform to it.

Well that is a problem, so what is the solution?

But how do we make our library code Lifecycle AwareÂ ?

Lifecycle Arch Components are a new set of lifecycle-aware components that can track the lifecycle of an activity or fragment, and adjust their behavior accordingly.

They are created by good folks at Google, were introduced at Google I/O 2017 and are currently in beta stage. Being in beta does not mean they aren’t ready. They seem to be the way most people are going to be moving forward in the near future as the library itself becomes stable. But we can get on the band wagon right now, as they are fairly ready.

Without taking much time, lets jump right into understanding how to wire these lifecycle components for your own android library…

I will be using a simple example to demonstrate the wiring up process, which is available as a completely functional example app on github here.

Lets start by creating a new app. Once done, you can add a new library module

Next you want to add a class to your awesomelib library module. I created mine named as AwesomeMainLibÂ . This class is just to showcase the code for library which will be referenced in the app module later on. For simplicity sake, lets make AwesomeMainLib class a singleton. The code in that case would look like below

But thats not the point here, right! We do not want the app developer to be calling these themselves. Also what happens if you want to trigger more methods at specific points in lifecycle of Activity/Fragment? The dependence on app developer increases by many folds and expecting them to do everything right is a like a chink in the armour.

Well let us solve this situation by integrating with Lifecycle Arch Components.

The first thing we need to do is add the required dependencies to build.gradle to each module.

Add the below to the build.gradle for awesomelib module

and add the below to the build.gradle for app module

Note: We are using the latest support lib v26.1.0Â , which now has AppCompatActivity implementing LifecycleOwner interface from Architecture Components. More about this, later in the post. For now just know you need support lib v26.1.0

… that done, sync your project.

Now is the time for us to integrate Lifecycle Arch Components into our android library module, awesomelib

We start by first implementing LifecyleObserver class in our AwesomeLibMain class.

From android official docs: LifecycleObserver is an interface which does not have any methods, instead, relies on OnLifecycleEvent annotated methods to mark the class for lifecycle events.

Now comes the magic. Once you have integrated Lifecycle Arch components, you have access to annotations which correspond to lifecycle events of Activity/Fragment such as

Once you annotate the right method with the specific annotation, that method would be triggered at the specified lifecycle event state, during the execution of Activity/Fragment.

Lets have a look at what our AwesomeLibMain class look, after we have annotated the methods

as you can see I added more methods and annotated them to get triggered at specific lifecycle event state.

But we are not done here yet. This just tells which method will be triggered when a specific lifecycle event state is reached for the Activity/Fragment. What is still required is to add our AwesomeLibMain class as an Observer for the lifecycle of the desired Activity. Turns out it is a really simple step, as can be seen below

From android official docs: LifecycleOwner is a single method interface that denotes that the class has a Lifecycle. It has one method, getLifecycle(), which must be implemented by the class.

Thats it! No, really thats all there is. You have successfully integrated lifecycle arch components in your awesomelib and now it is observing Activity Lifecycle events and triggering the right methods at the right time, without requiring the app developer to worry about anything.

Note: This is the only step app developer needs to do when going to use your android library in terms of integrating your library code in the activity, apart from adding it in the build.gradle dependency section. All methods will be triggered automatically when a said lifecycle event state is reached during the execution of the Activity/Fragment.

What I have tried to explain here is more like a proof of concept, I am sure one can very easily implement it in an existing android library code and make use of the benefits lifecycle arch components bring along. 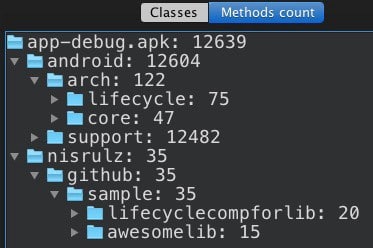 So as you can see they are pretty light in terms of adding method count. Support library is part of the app module and something usually all apps nowadays have, so you are basically not shipping your android library with that. ðŸ˜…

As mentioned at the start of this post, the code for above is available on github here.

If you have suggestions or maybe would like me to add something to the content here, please let me know.
Till then keep crushing code ðŸ¤“

I gave a talk on this topic at Droidcon Berlin ’17, checkout the slides here.This post got featured in Android Weekly Issue 276! ðŸ˜Ž

P.S. : This post is also published on medium. and my own blog

Nishant Srivastava
Android Engineer. Doodler.
Want To Step Up Your Android Learning Game? You Need To Read This First
#android #edd #example #bestpractices
Things I wish I knew when I started building Android SDK/Libraries
#android #library #sdk #bestpractices
I could not find a simple Gesture Detection android library, so I built one
#android #sdk #gesture #detection

Once suspended, nisrulz will not be able to comment or publish posts until their suspension is removed.

Once unsuspended, nisrulz will be able to comment and publish posts again.

Once unpublished, all posts by nisrulz will become hidden and only accessible to themselves.

If nisrulz is not suspended, they can still re-publish their posts from their dashboard.

Once unpublished, this post will become invisible to the public and only accessible to Nishant Srivastava.

Thanks for keeping DEV Community 👩‍💻👨‍💻 safe. Here is what you can do to flag nisrulz:

Unflagging nisrulz will restore default visibility to their posts.