One of the things we do at All Around the World is apply the Pareto Principle: 80% of your results stem from 20% of your actions. We get hired to fix things for clients and don't have the luxury of sitting around for days to debate the perfect way of doing things before we start working. Today, I'll discuss our git workflow—created by following that principle—and how knowing only three simply git commands makes git easy for everyone.

I've introduced this workflow to several clients and all of them love it.

git workflow tools used by All Around the World

This repo contains a simplified subset of the git tools used by All Around the World for our software development. It makes it dead easy for teams using git (and in our case, github) to work together.

There are only three new commands to remember:

Note: only the bin/git-hub command assumes you're using github. The other commands work fine without it.

The default branch (usually main or master) is never worked on directly Instead, new branches are created (usually for an individual github ticket) we hack, we regularly pull new changes into that branch, and after a pull request is created and the approved, we merge the code back into the default branch.

And that's it. Three simple commands to remember and git gets out of your way.

The git command is extremely complicated. Invariably in a team environment, someone gets something "wrong" with git and the local git guru comes by and does mysterious things with git fsck, git reflog, and other commands that developers have never heard of. And while it's useful to have a git guru on hand, we find it's even easier to have a single, standard way of using git so that all developers are doing things the same way. Even developers new to git find our workflow very easy.

It's designed largely to avoid git histories which make the Gordian Knot look like a bowtie. 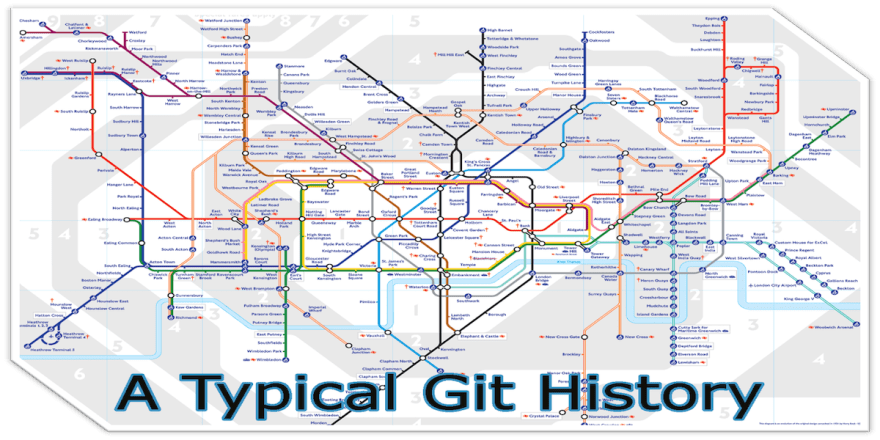 For us, the complicated history was the showstopper. We want a clean, linear history and an "easy-to-use" workflow. It's based on the following logic:

As an aside, one popular workflow is git-flow. Yet git-flow has its detractors and it's easy to find many more. I found the convoluted history and strict requirements that things be "just so" to not be a good fit for our workflow. It might be the perfect fit for yours.

The git workflow tools are open source and they contain a simplified subset of the git tools used by All Around the World for our software development. It makes it dead easy for teams using git (and in our case, github) to work together.

There are only three new commands to remember:

Note: you don't even need the bin/git-hub command. It assumes you're using github, but other commands work fine without it. Further, the bin/git-hub code uses Perl 5.20 and needs some modules installed. However, git refresh and git merge-with-master are just bash scripts, so they'll work fine out of the box if you can use bash.

If you prefer bash, there's an experimental bin/git-hub-bash script. My bash isn't brilliant. Be warned.

The master branch is never worked on directly. Instead, new branches are created (usually for an individual github ticket), we hack, we regularly pull new changes into that branch, and after a pull request is created and the approved, we merge the code back into master.

The examples below assume the files in the bin/ directory are in your path. If they are not in your path, you have to type the commands explicitly:

Checking Out a Branch

I assume that branches are usually per ticket. You can manually create a branch, but I tend not to. Instead, if you are going to work on github issue 5738, with the title "Reduce reputation for failed crimes", you run the following command:

And you're in a shiny new branch named reduce-reputation-for-failed-crimes-5738.

If that branch already exists, it's checked out.

If you're not using github, it's trivial to do this by hand:

I just like the convenience of always having standard naming conventions. And if someone wants to contribute a bin/git-lab script to the project, I'll happily accept it (though a more general bin/git-start-ticket would probably be better).

You will also need to install the following modules from the CPAN if you've not already done so.

If you're not familiar with installing CPAN modules, check out cpanminus, or you can use the cpan command line tool that is standard with Perl.

While working on your branch, you want to regularly pull in the latest master to keep your code up-to-date. Working on a change for a week with a fast-moving codebase can cause serious headaches when it's time to merge. Thus, you should regularly run the following in your branch (I try to run it at least once per day):

Regardless of the branch you are on, this code:

In other words, it cleanly rebases your code on top of master, even if you have uncommitted changes.

Note: for everyone who keeps asking "why not git pull --rebase --autostash?"

The simple reason is backwards-compatibility. Sometimes developers have older versions of git installed and while that's usually perfectly compatible with newer versions, we don't force them to upgrade. Also, internally git-refresh does things like git fetch -p to remove references to remote branches which no longer exist. This regular "house cleaning" helps to keep git more performant. See the Pruning documentation for git-fetch for more information.

Note: if this command aborts (such as during a merge conflict), the stashed changes will remain stashed. Run git stash to see those changes and git stash pop to return them to your codebase when you've finished resolving the merge conflicts.

So you've finished your work and are ready to merge your branch back into master. Here's one way to do that very cleanly and safely:

You'll remember that, right? And you'll never mess it up?

For us, we simply run:

And that will cleanly update master and rebase your branch on top of it, and push that change to your origin.

With that, you get a clean git history like this:

And when you're done, it will also print out the instructions on how you can delete your local and remote copies of the branch, to help you be nice and not leave branches cluttering up the repository.

With all of this rebasing, you're sometimes going to hit the dreaded ...

And then you're very unhappy. Worse, if you do this after a week of isolated hacking, you might get a huge amount of merge conflicts to work through. However, by running git refresh at least once a day, if not more often, those conflicts are minimized. And when you do get them? I have the following in my .bash_aliases file:

Then, when I get a conflict, I just type damnit and am automatically editing the files which caused the conflict. It saves me a huge amount of time.

If you have ack installed, you might find this better:

If you're interested in helping, there are several tasks we've not gotten around to because we didn't need them. Others might.

Deploy your React App on Github in 5 minutes

Ovid
Well-known software developer specializing in large-scale database-driven web sites. Usually I use Perl. I speak at too many conferences. https://allaroundtheworld.fr/
What Programming Language to Learn First 🎓
#programming #beginners #discuss
We are trending on Github, This is how we did it 🤯
#discuss #javascript #webdev #productivity
What text editor should I use? ⌨️
#programming #discuss #productivity

Once suspended, ovid will not be able to comment or publish posts until their suspension is removed.

Once unsuspended, ovid will be able to comment and publish posts again.

Once unpublished, all posts by ovid will become hidden and only accessible to themselves.

If ovid is not suspended, they can still re-publish their posts from their dashboard.

Once unpublished, this post will become invisible to the public and only accessible to Ovid.

Thanks for keeping DEV Community safe. Here is what you can do to flag ovid:

Unflagging ovid will restore default visibility to their posts.