The entire process of mobile app development consist of many steps, and choosing the right technology for a specific case is one of the crucial decision.

This is why there were probably quite a few reasons you choose cross-platform development, and added React Native to your tech stack.

The last question is: Is it better to outsource the work to a specialized agency, rent a single React Native developer as a team augmentation, or hire an in-house developer and start building an internal team?

Should I hire a React Native Developer, or an Agency?

To decide between hiring an in-house React Native developer and outsourcing the work to React Native agency, you should consider the costs of each option and their pros and cons.

Often these pros and cons can be translated into costs that can’t be expressed in monetary terms but have even higher value – for example, the cost may be your time that’s better spent elsewhere. Or in some cases, choosing one option may cost you more in monetary terms, but you will save time that’s worth more.

Now, without further ado, let’s move to the relevant part of the article.

Outsourcing the React Native development might be a great solution if:

Pros and Cons of hiring an Agency

Even if one of the situations above doesn’t apply to you, the list of pros and cons of hiring React Native agency is still worth reading.

Let’s look at the rates and total costs of choosing React Native agency from different cities in Europe and the United States.

Hiring an in-house React Native developer might be a great solution for you if:

If you are not convinced to outsourcing all the work, the pros and cons of hiring a React Native developer might be a deciding factor to start building an internal team.

Cons of hiring an in-house developer (or entire team)

The actual cost consists of:

The entire recruitment process is demanding, and it can take a lot of time and effort. What about the costs? Sometimes, they are hard to measure, but let’s try to list all of the things you have to consider when hiring a single developer.

Let’s be clear – some of these benefits are regulated by law, and some are demanded by developers. And these days, the latter ones are hard to omit because of the huge fight for good employees.

Developers need to have well-equipped workstations, and this equipment includes:

Now, knowing what else we need to include (apart from basic salary) to get the actual cost of hiring a single React Native developer, let’s make some calculations.

Before diving into numbers, check which option – React Native agency or React Native developer – is better in which scenario. 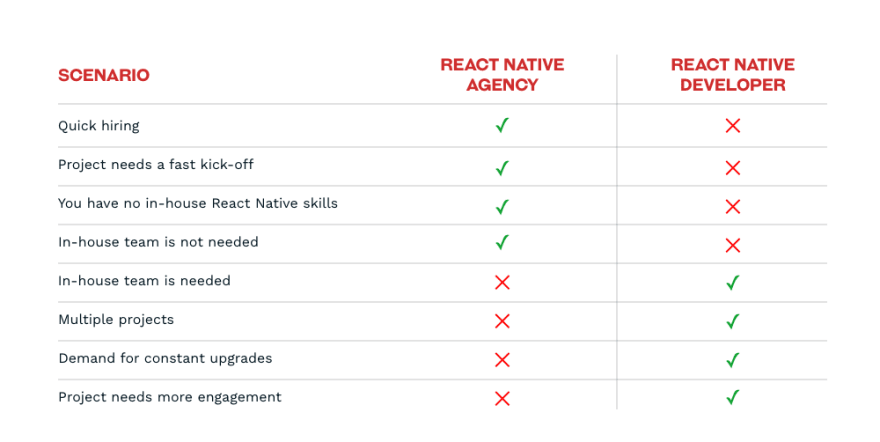 If you don’t have too much React Native experience and don’t have a team, it’s always worth asking an experienced CTO for advice or book a free agency consultation (you can book one by clicking here).

If you want to build an IT team soon or in the future, remember that agencies often help build internal competencies during project implementation. That’s exactly how we helped Gorilla Agency – you can read the case study here.

On the other hand, if you have React Native experience and you need full-time support and engagement in product development, it’s definitely better to scale up an in-house team by hiring developers.

Once unpublished, this post will become invisible to the public and only accessible to tomgrabski.