I recently played around a bit with the various utPLSQL annotations and found them pretty powerful.

I’m pretty sure I will write some more about how you can use annotations like --%beforeall or --%context to make your tests more expressive, but today I just want to showcase some techniques and tell the story of the original Star Wars movies.

For the interesting part is completely in the package specification I will skip the body in the highlighted code here. Each procedure implementation only contains a call to dbms_output.put_line with some text.

You can get the whole example as always from my github.

And one child package:

Let’s look at the complete output of call ut.run(':sw_story_base') (with set serveroutput on) before I list some takeaways from this example

If we draw some boxes around suites, contexts and tests and highlight the different outputs based on the annotation that made them appear, we get this: 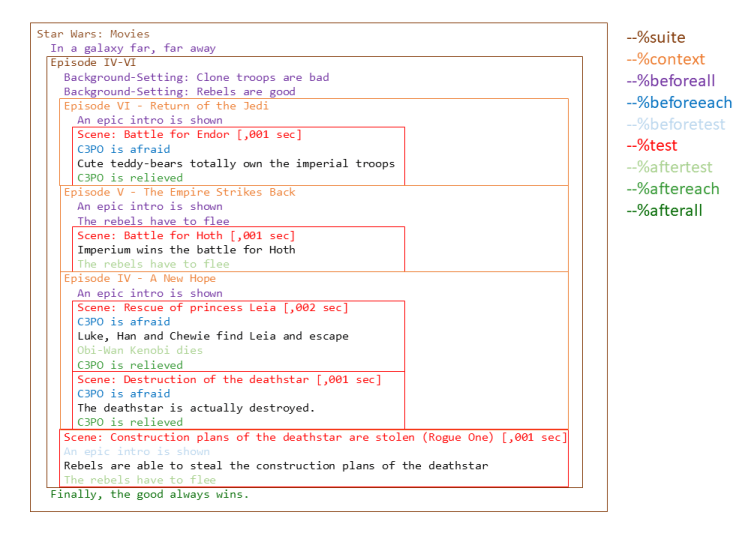 That is because there are no tests in the sw_story_base suite, but only in the sw_story_episode4_to_6, but beforeeach and aftereach are limited to tests of the same suite.

However, if they are defined on suite-level, they are also called for tests inside of contexts.

Takeaway 2: “before” and “after” annotations can be parameterized with method-references

All before and after annotations allow to be parameterized with references to procedures:

The referenced procedures don’t need to be in the same package but must be accessible.

Multiple references can be separated by comma and their order of execution is fixed.

Takeaway 3: You can reference the same method from different annotations

If you look at the rebels_flee procedure, it is referenced from several different annotations: beforeall and aftertest.

There is no limitation how often or from which annotations you can reference a method.

As you can see with deleted_scenes, you can even annotate a method with beforeeach and additionally reference it as aftereach (or any other before or after annotation).

It’s obvious that our example messed up the order in which the different Episodes and Scenes are being called (there is even a new random test-execution functionality available since 3.1.7).

But the order in which the before and after methods are called is always fixed and you can totally rely on that.

So while you should aim to make tests and contexts independent from each other, you can guarantee their setup and teardown.

I hope this little funny example showed you something new. If so, I’d love to hear about it.

But there’s another thing: I really wanted to create a little animation of that example-image where each step is highlighted together with the annotation that was used to call it. I sunk some hours trying to achieve it with PowerPoint but finally gave up frustrated.

If you know about any good and cheap tools that would help to explain stuff like this (for example by animated highlight/spotlight), please give me a hint.

Creating a discord bot on the go to be published soon!

Samuel Nitsche
Curiosity-driven software-developer, 10x underpants. Striving for harm-reduction. We don't need more rockstars, we need more mentors.
List Comprehension – What Is It And Does It Only Exist In Python?
#programmingconcepts #100codeexamples #concepts #python
"But that worked yesterday!" or, why you should test with utPLSQL
#testing #utplsql #oracle
OGB Appreciation Day: Explore a utPLSQL test scenario with “force-manual-rollback”
#100codeexamples #plsql #testing #utplsql

Once suspended, pesse will not be able to comment or publish posts until their suspension is removed.

Once unsuspended, pesse will be able to comment and publish posts again.

Once unpublished, all posts by pesse will become hidden and only accessible to themselves.

If pesse is not suspended, they can still re-publish their posts from their dashboard.

Once unpublished, this post will become invisible to the public and only accessible to Samuel Nitsche.

Thanks for keeping DEV Community 👩‍💻👨‍💻 safe. Here is what you can do to flag pesse:

Unflagging pesse will restore default visibility to their posts.