Someone is ranting on his Facebook’s wall. 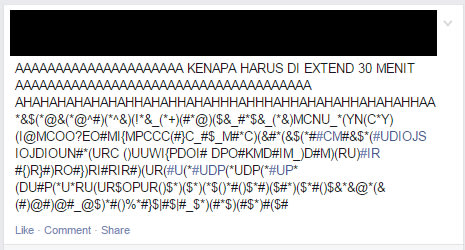 Notice that there are several blue-colored texts in the rant (which are hashtags, since they begin with a hash character / #). However, not all of hash-beginning words and texts which are not counted as hashtags, such as #)(*, #*C), and ##CM (only the #CM part of the text is considered one).

A valid hashtag (in this case, as a guideline for answering this problem) should begin with a hash character (#), following with an alphabet (a-z, A-Z) and optionally, a set of (one or more) alphanumeric characters (a-z, A-Z, 0-9). Hashtags should not immediately follow another hashtag, hence each adjacent hashtag should be separated by a space or non-alphanumeric character.

This regular expression pattern utilizes capture groups to detect individual hashtags. The pattern is structured into

If you’re familiar with regular expressions, you can clearly understand that the above pattern exactly matches the aforementioned hashtag rules:

The second capture group simply repeats the first one, and it is intended to capture valid hashtags which follow any valid hashtag, such as #alpha#beta. {0,1} is then appended on the entire regex pattern to ensure that the second group is optional, so any other isolated valid hashtags can still be detected, such as 2847#helloworld:$24. This also prevents strings such as #hello#to#the#world to be detected as one hashtag, since according to the rules the string should be treated as 2 separate ones (#hello and #the).

Competitive programming competitions such as ICPC and INC allows submissions in C, C++, Java or Python. And fortunately, once we have found the valid regex pattern, we can directly implement it into C++, Java and Python code using standard regex libraries. Note that in order to answer the original question, you’ll need to get/extract the result using the first capture group, or else the judging system will consider a wrong answer.

I believe that this problem can also be solved in many ways, perhaps by utilizing certain string matching algorithms to optimize the hashtag-counting process. However, it’s quite interesting that this problem can be solved by a one-liner regular expression pattern, which is acceptable in many programming languages. I wonder whether and how quick the original contestants realized that a regex-based solution is possible for this problem.

What Are The Best Resources For Competitive Programming?