Back in 2016 we launched the very first edition of the State of JavaScript survey, and last year we decided to give it a little sister in the form of the State of CSS survey.

It's taken us a while (is it October already?!) but we're happy to announce that the 2020 edition of the State of CSS survey is now live, with the results hopefully following a few weeks from now.

It's no secret that the web ecosystem never stays still, so the goal of the survey is to identify the latest trends in order to help you decide what to learn and use next!

And speaking of not staying still, we've got our own share of innovations this year.

Take the Survey in Your Language!

Our biggest change is that we've localized the survey in as many languages as we could, thanks to a team of absolutely awesome volunteers. 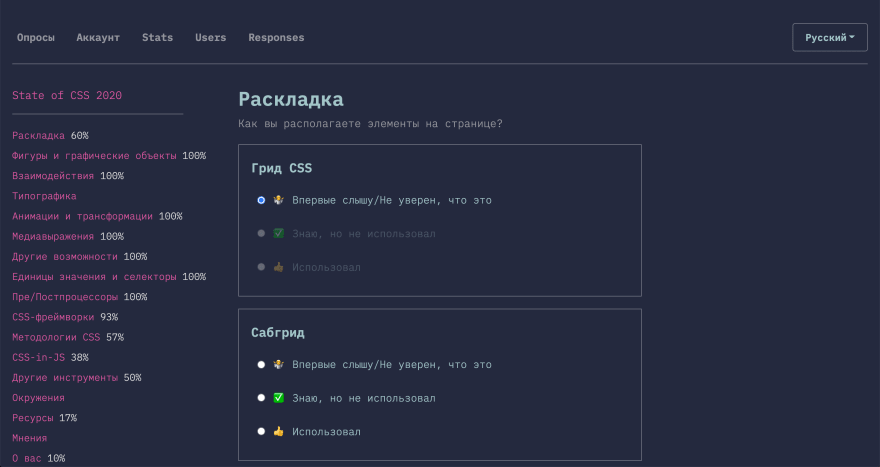 We knew that an English-only survey would always bias our results towards English-speaking countries, which meant writing off huge sections of the web development community.

So we've always wanted to translate our surveys, and after building our own survey platform from scratch we're finally able to do it!

We've also adopted a new way of serving the translations via our GraphQL API that will hopefully make it much easier to reuse translations from one survey to the next without having to start over each time.

The survey itself has also changed. The past year has seen its fair share of new CSS innovations, and we wanted the survey to reflect that. Some of the new features we're asking about include:

Find out Your CSS Score

If you're not feeling familiar with these few fresh-faced features, feel no fear: at the end of the survey, we'll show you a scorecard of sorts, along with a couple links where you can learn more about anything you missed. 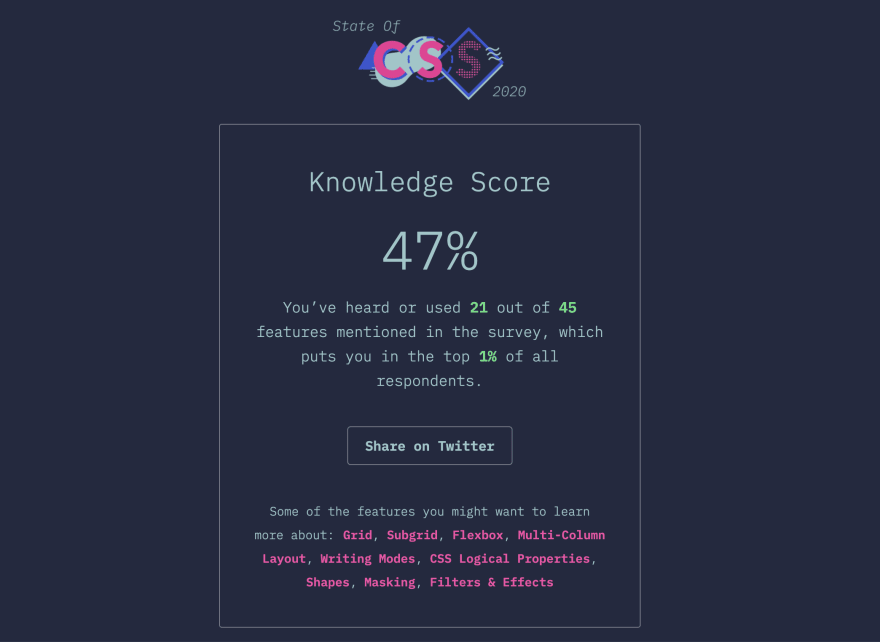 The more inputs we have, the more insights we'll be able to extract from out data. So that's why we're asking anybody who builds websites and uses CSS to take the survey. It takes about 15 minutes, and after you create an account you can come back anytime to finish it.

The survey will be open until November 5th, so stay tuned for the results soon after that!

Hexagonal Architecture in Angular: An Overview with an Example

Once suspended, sachagreif will not be able to comment or publish posts until their suspension is removed.

Once unsuspended, sachagreif will be able to comment and publish posts again.

Once unpublished, all posts by sachagreif will become hidden and only accessible to themselves.

If sachagreif is not suspended, they can still re-publish their posts from their dashboard.

Once unpublished, this post will become invisible to the public and only accessible to Sacha Greif.

Thanks for keeping DEV Community 👩‍💻👨‍💻 safe. Here is what you can do to flag sachagreif:

Unflagging sachagreif will restore default visibility to their posts.