In this post we will learn how to make CRUD rest api in node js from scratch without using any frameworks such as Express,Oak,etc 😍.We will use basic node http package to build it .

🔥 Get Up And Running With Server

Enough of theory , now lets discuss how we can build a simple CRUD api to manage Todos.This is the link to github repository where you will get the completed source code. In this you will need two files
which are data.js and todoController.js. In todo.js you will find dummy data used for this tutorial. Because I don't want to make things complex by adding databases and all that stuff for the sake of this tutorial. In todoController.js you will find some functions which we can perform on this data e.g. find todo by its id or get all todos like that. You are free to go through these two files.\
We are going to have five routes to manage todos.

Before writing any routes , we need to understand two methods present on res parameter of requestListener.

Firstly , we will check if the url and method of incoming request is /api/todos and GET respectively.If it is the case then we will fetch all todos from data.js with the help of todoController.js and then if all goes well then we will set the status code as 200 which indicates that the request has been succesful. Here , we will also set the header as Content-Type : application/json which tells the client that the content type of the returned content is JSON format.We are going to set this header in every route and in each request we are going to convert our data to JSON string.Then if url or method of incoming request does not match , then we will set the status code as 404 which indicates NOT FOUND and we will send message that route not found as response.

For testing API during development you can use any client as you wish. I prefer Postman for testing my APIs. You can get it here for any platform.\ 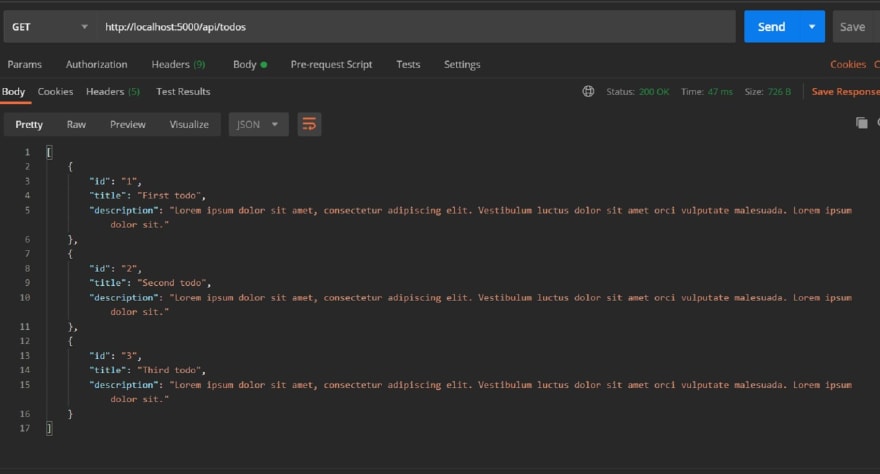 For this route also our procedure will be same. Only difference will be instead of fetching all todos we will fetch a single todo and return back response. In this route we will have a dynamic parameter id which will be passed into route itself and depend on which we will fetch particular todo.

In this route firstly , we will check if the req.method is DELETE\
This route will be same as above route the only difference will be instead of fetching by id ,we will delete a todo by its id and send message as response to user.

After testing it in Postman

And that's it for this one. To see how we can create remaining two routes i.e. one for creating todo and one for updating todo , visit satishnaikawadi.me

I hope all of you understand at least to some extent what I explained in this post 😇. If any one has queries feel free to ask them.

Tasks for considering before SaaS implementation