“Wind LIDAR (a portmanteau of “light” and “radar”) is a technique where low-noise laser light is used to measure wind speed and direction with high accuracy.”

“The accurate prediction of energy yield is vital to the success of wind farm projects. Wind data has traditionally been collected — with great difficulty — using expensive anemometry masts and numerous measurement points.

Raising an anemometry mast results in several negative issues such as the need for building permits, environmental concerns as well as health & safety concerns.

Using laser anemometry instead provides complete wind resource management including horizontal and vertical wind speed, direction and turbulence. All the data wind farms need to pick the optimal location for new wind turbines — but without having to build a mast.

When making a laser anemometry system, one of the biggest challenges is to identify a laser source with very low intensity and phase-noise which can detect the very weak signal coming back from a Doppler-shift reflection.”

The Doppler effect basically is the change in wavelength of a wave (Laser beam in our case) when the source and the receiver are moving relative to each other.

We can do the same with wind. But you might ask that wind is not an object! How is it going to reflect the beam? Well turns out that air is full of reflective particles including dust particles and water molecules. It’s pretty obvious that the beam reflected off these particles has a very low intensity and That’s one of the tricky parts of building a laser anemometer.

Setup (And the process)

First, our laser starts radiating a beam and it triggers our oscilloscope system to start recording at the same time. Then the laser beam is split into two beams. We keep one beam in our isolated system and send the other into the open air after passing it through a Collimator.

We read both beams using a Photodiode and then pass them to an Oscilloscope to measure the overlapped wave. The frequency of our overlapped wave changes when our beam is reflected off a particle with a different speed.

The speed of the wind is now measured in one direction. We can point the laser to other directions using mirrors so we can have speed data from an area in front of our wind turbines. 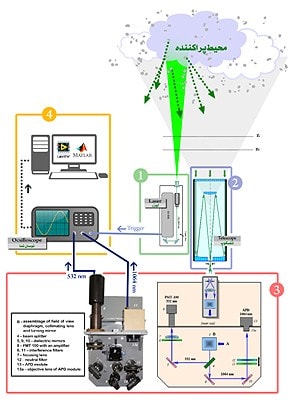 And that’s basically how Laser doppler anemometers work in theory!