This post is a part of our annual JVM ecosystem report! This report presents the results of the largest annual survey on the JVM ecosystem, showing results from the survey gathering over 2000 responses in the second half of 2019.
You can read the full report on our website or download the nice and shiny pdf version.

What is the main JVM language you use for your main application?

While the variety of JVM languages grew over the last couple of years, the large majority of JVM users — nearly 9 out of 10 — still use Java as their main language.

One of the reasons we see this consistently large percentage over the years, is the fact that Java
is constantly changing. Many of the language constructs and paradigms that other JVM languages have been using to differentiate themselves from Java, have been introduced and implemented in Java, such as local type inference, and lambdas, to name just a couple. The new Java release cycle also makes these new features available to developers earlier than before.

However, despite the strong preference for Java, the use of other JVM languages grew as well. Particularly Kotlin, a language developed by JetBrains, gained a lot of popularity over the last couple of years. In fact, Kotlin grew from 2.4%, according to last year’s report, to an impressive 5.5%. 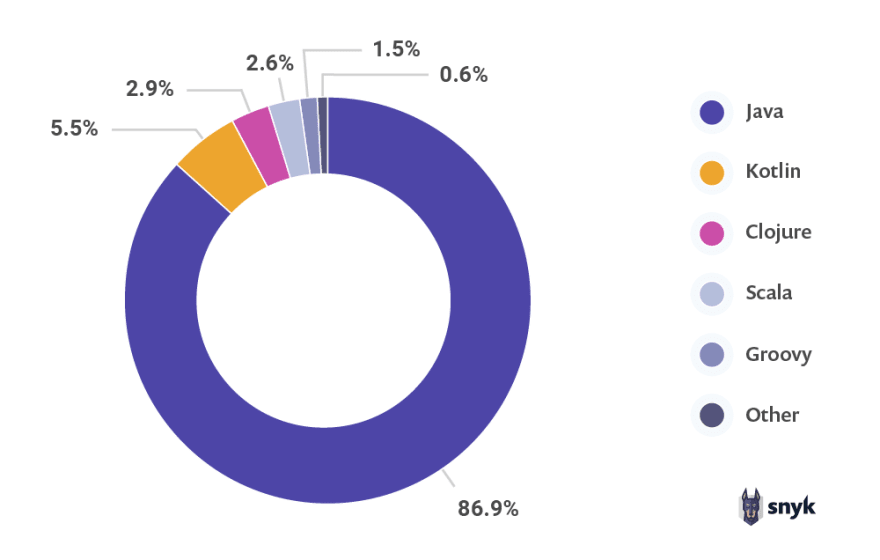 The growth of Kotlin adoption, among JVM users, is not surprising considering how seamlessly it integrates with Java. Not to mention that, the adoption of Kotlin in frameworks like Spring Boot made it easier to create production-grade systems

It is important to note that, the innovations Kotlin tries to achieve flow back into the development of Java. Newer Java versions try to integrate concepts that are popular and loved in languages like Kotlin. It is interesting to see how this influences the future adoption of different JVM languages.

Do you write or maintain any Java applications? For those who don’t use Java in their main application, do they use it at all?

Not every JVM developer uses Java as their main language. Based on the responses to the previous question, JVM developers who predominantly use other languages in their application, account for 13%. Out of this group of developers, the majority (70%) still uses Java in some capacity, during their regular work.

This means that 96% of overall respondents use Java, either as their main language or to a smaller extent, in their application. Only 4% of respondents run applications on the JVM that entirely use alternative JVM languages.

How to use Socialite package with Laravel

Thanks for keeping DEV Community safe. Here is what you can do to flag snyk: