Recently I installed a VS Code extension called GistPad which from the marketplace docs says:

It is a great extension and I am using Gists way more now.

The marketplace docs are a great place to start reading up about it.

Another neat feature is the interactive playgrounds which again from the marketplace docs explain :

I am a big fan of VueJS so I decided to spin up a new interactive playground choosing VueJS from the menu that appears.

There is a nice hello world style template that you can use to get started with.

Rather than displaying weather data or random data, I decided to use crime data for Oxfordshire from Data.Police.UK which seemed an interesting dataset to play around with.

I started by reading the docs and looking the example request which takes pairs of lat/long coordinates to describe an area:

I then found this site which allowed me to draw an area and then get those lat/lon coordinates.

Then looking at the sample JSON response back from the API I then had enough to get started on my VueJS GistPad Interactive Playground:

Right-clicking in the GistPad tab in VSCode showed me a menu allowing me to create either a public or private interactive playground.

The template is plenty to get started with.

It gives you 3 files to edit and a preview pane that refreshes whenever you make a change which is an excellent developer inner loop. 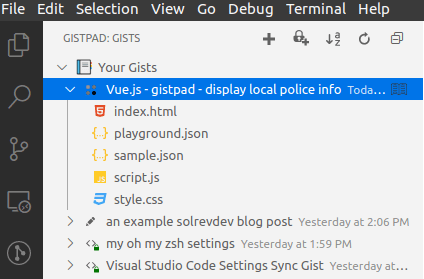 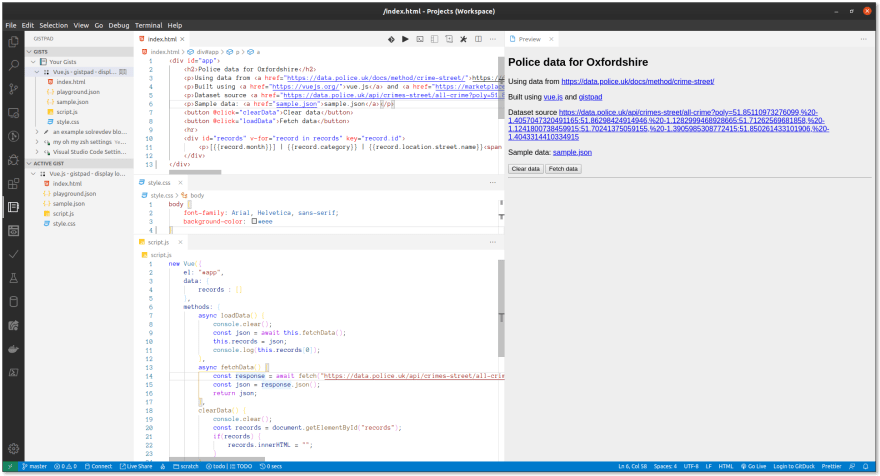 So after some trial and error, these were my 3 files all associated with a GitHub Gist

The GistPad toolbar has an icon that allows you to open a console to view the output of your console.log statements and I soon had a working version.

If you would like to see my Police Data sample try this link:

All in all, it’s an excellent experience.

If VueJS isn’t your thing then react is an option and typescript versions of both these frameworks are available and it’s open for more templates to be submitted to them.

Working with Markdown in VS Code

Trending on DEV
How I Got My Website to Load in 1 Second
#programming #webdev #showdev #productivity
Why did you Decide to Learn Programming?
#discuss #webdev #beginners #codenewbie
Share your WFH setup!
#discuss #workstations
A productive web developer needs a buddy in his browser (Chrome Extension)
#webdev #javascript #productivity #beginners
Are you coding more in your spare time due to COVID—19?
#discuss #watercooler
YAML vs. XML vs. JSON for Configuration
#discuss
How to Create Data-Driven User Interfaces in Vue
#vue #javascript #webdev #tutorial
Quasar and Apollo - Client State without Vuex - Part 1
#vue #apollo #quasarframework #graphql