At first glance AWS RoboMaker might appear to be smoke and mirrors. That's certainly how I felt before I had given the service a good look this week.

AWS RoboMaker is a development, deployment and simulation platform for ROS (Robot Operating System). ROS has been around for a long time and is widely used throughout the Robotics industry. Because of its niche, and the fact that its usefulness isn't as apparent outside of industry; it's no surprise RoboMaker hasn't really caught many peoples attention in my Twitter circles.

The purpose of this post is to ultimately walk you through simulating ROS packages on AWS RoboMaker. While this isn't a new topic, I don't believe anyone has done it justice for the ultra beginners. We won't be writing any ROS modules, however I'll try to make you feel comfortable packaging up existing ones.

There is a huge collection of fantastic examples of RoboMaker configured ROS projects on the AWS Robotics github. The project we work on in this post is interchangeable with the ones there.

At the heart of RoboMaker is the manager services for a couple pieces of software:

RoboMaker will automatically setup all these pieces for you, which doesn't sound like a big deal; however if you've tried managing this stack of software yourself you'll be aware of how many moving parts there are.

For the project I've created a Dockerized environment that can be used to fully simulate everything locally (Gazebo is the exception due to graphic passthrough limitations over VNC). Pull down the repository to start with

To run the build and setup of an environment is as easy as running the following:

Now go get a cup of coffee, because this will take some time. Once completed, running docker ps -a will reveal the following is running

Open up http://localhost:6080 in a browser and you should be presented with a VNC'd session of the environment 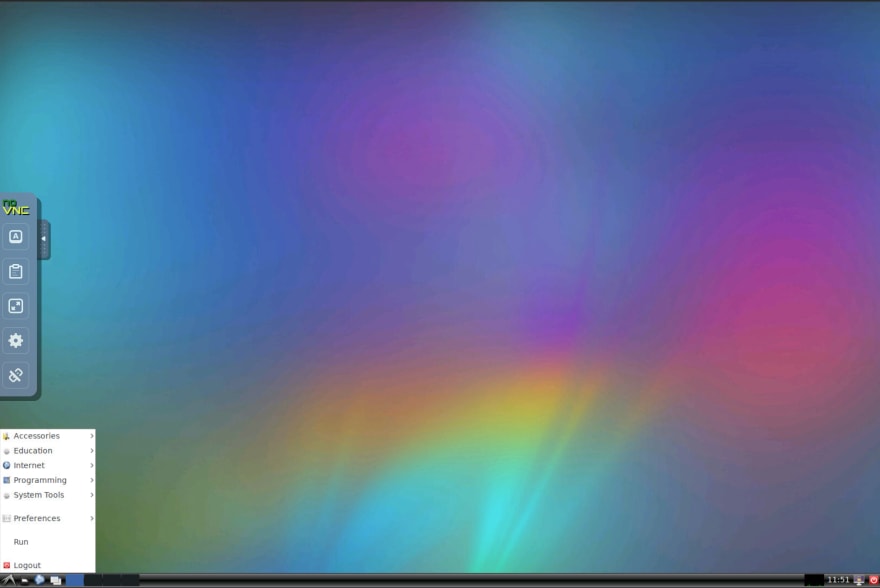 To begin with lets simulate the ROS deployment locally. Fire up a terminal and run the following commands

Updating the workspace will pull down any external dependencies that aren't in the repo that might be needed. You can inspect what these are by opening the .rosinstall file in the simulation_ws Workspace. In this case you can see below what are required.

The final step is to build the local packages. For this we use colcon which will orchastrate all the necessary steps to build all the modules.

If everything goes correctly, you should see the following

We're now ready to run the simulation locally. For this example we have the option to set what type of robot we'd like to use. This is done by setting an environment variable like so:

There are two options for the simulation environment:

A terminal isn't very interesting, and the fun stuff is actually viewing the robot. This can be done using RViz. Open up a new terminal and run the following

You'll be greeted with a UI. From here you need to add the Map from the topic 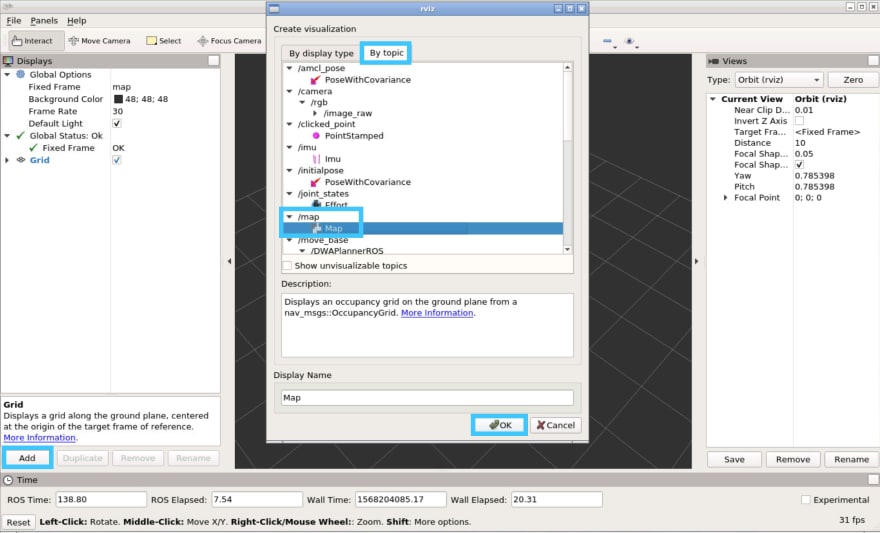 And the RobotState from the basic display type 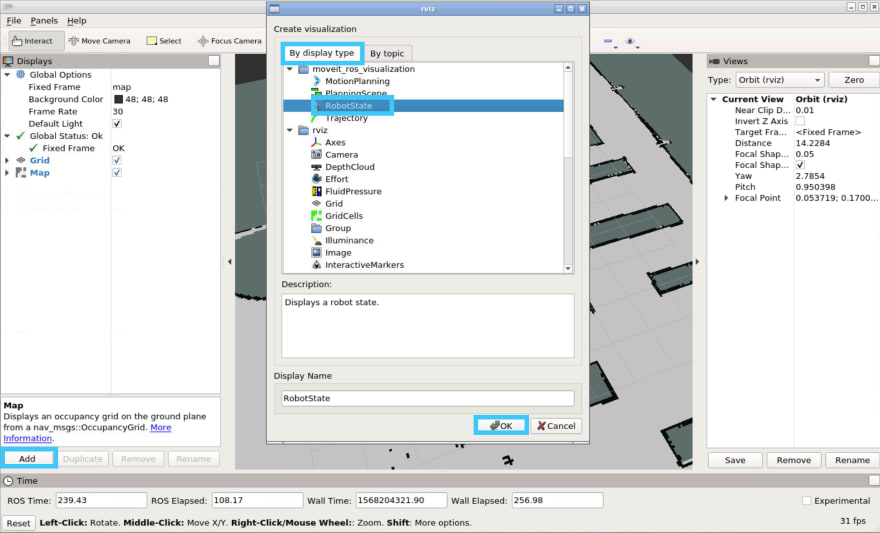 Have a play around, add in some other optional displays. Below is an example of Camera and LaserScan data. 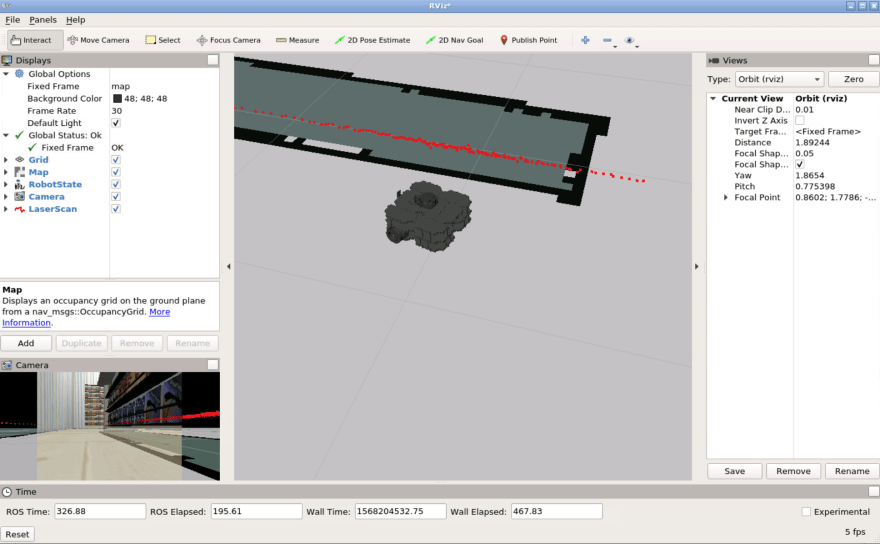 When you're done, close down RViz and lets move onto the next step.

To deploy to RoboMaker we'll need to bundle up everything that makes our robot special. This is done using colcon.

This step takes a very long time (30+ minutes in some cases) as the bundler needs to pull down literally everything needed to run your robot from scratch.

Once completed it will spit out an output.tar file in simulation_ws/bundle/output.tar. We should pull this tar down to our local computer. This is done using the following docker command from your actual computer (not in the container)

We will then need to upload this .tar to an S3 bucket to be used in the next steps. I'm going to be using my own bucket devopstar, you will need to make your own. This is done by running the following command

NOTE: For the remainder of this tutorial I'll be using the following bucket and path for my files. Replace these references with your own

Upload the tar to S3 in a folder called input. The naming doesn't really matter, however it makes it easier to distinguish.

I've written a deployment of the RoboMakerSimulation and custom roles required using CDK, however this isn't necessary for the tutorial. If you want to know how to create the CloudFormation template used in this tutorial, you run run the following

If you want to deploy using CloudFormation, deploy the cdk/template.yaml file from either the CLI or Web interface. Your parameters will be different based on the bucket name and .tar location.

Take note of the outputs from the creation of the resources. You should recieve the following:

The final step now is to run the Simulation job from the RoboMaker console. Unfortunately there's no simple way to deploy this piece with CloudFormation. Use the information from the previous step to create a version of the following json (available in RoboMakerJob.json)

Deploy the job using the CLI

Once loaded up, open an instance of Gazebo 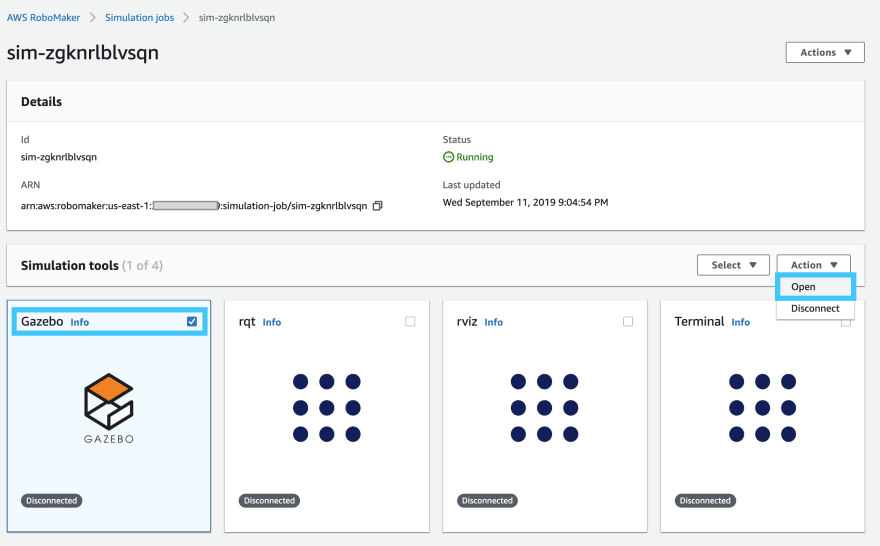 You should now be able to interact with the Simulation in a 3D space. 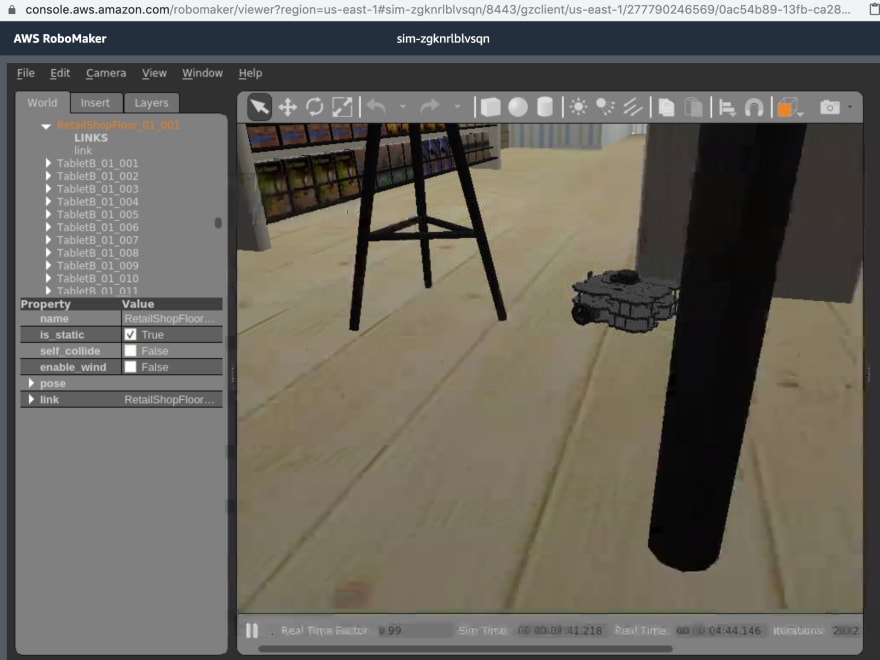 AWS RoboMaker is a service that probably has gone mostly unnoticed to general users. However I can definitely see its value after giving it some time. ROS can be a major pain to work with, mostly due to different versions requiring distinctly different versions of roscore.

2 arrays of Same value are not equal in JS.

Once suspended, t04glovern will not be able to comment or publish posts until their suspension is removed.

Once unsuspended, t04glovern will be able to comment and publish posts again.

Once unpublished, all posts by t04glovern will become hidden and only accessible to themselves.

If t04glovern is not suspended, they can still re-publish their posts from their dashboard.

Once unpublished, this post will become invisible to the public and only accessible to Nathan Glover.

Thanks for keeping DEV Community safe. Here is what you can do to flag t04glovern:

Unflagging t04glovern will restore default visibility to their posts.