Smart devices, such as laptops, tablets, smartphones, and smartwatches, have become a vital part of our daily lives. Only a few decades ago, computers’ capability was limited by their enormous size; nevertheless, relentless improvement has now enabled us to wear advanced technology and use them to make life easier and more efficient.

With the introduction of smart wearable devices, prominent IT businesses are seeing the value of wearable app development and how it can benefit their target audience. 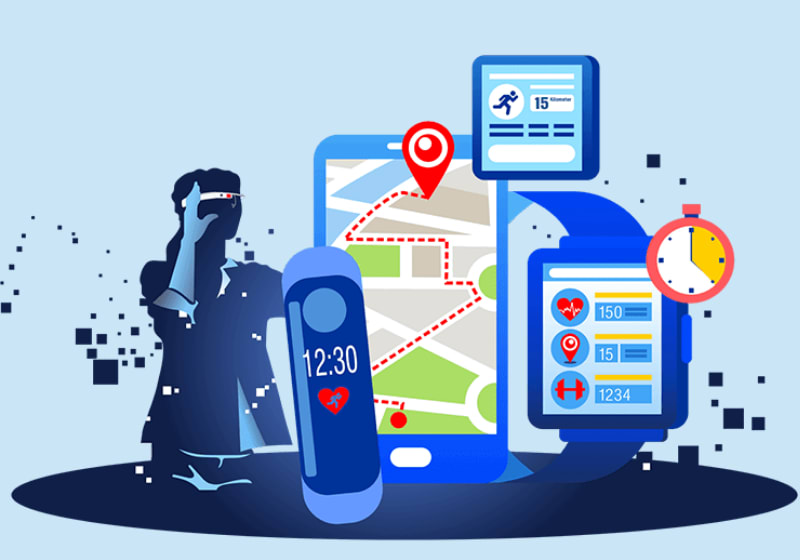 Wearable apps were previously non-existent. Wearables have only recently begun to take off, thanks to an incredible sensory and scanning feature package.

In the IT industry, this technology has opened several doors of opportunity. Some well-known wearable products, such as the Apple Watch, Fitbit, Pebble, and Google Glass, have fundamentally transformed customer expectations, motivating developers to create wearable devices. This game-changing technology has prompted various sectors to investigate its utility and potential. Education, fitness, fashion, music, gaming, tourism, transportation, and finance are just a few of the fields where the app has made an impact.

App development for wearable devices is now bringing personalization to a whole new level. It’s something you’ll be wearing now, from clothing to glasses to helmets to watches. The Internet of Everything (IoE), which aims to provide context-based and beneficial connections, will drive all possibilities.

Despite all of the positive statistics, developing wearable apps is not an easy task. Wearable technology app developers encounter obstacles that have a direct impact on the wearable apps’ efficiency. There’s a lot to overcome, from security problems to different user interfaces.

In this article, we will take a look at a few of the most common challenges that developers face while creating these wearable apps and how do they overcome that.

But first, let’s see what do we mean by Wearable apps and Wearable Technology.

Have you ever heard the term “wearable technologies” but had no idea what it meant? Simply described, wearable technology refers to a group of electronic devices worn as a fashion accessory.

Wearable technologies refer to electronic devices that can be worn as accessories, embedded in clothing, implanted in the body, or tattooed on the skin. These gadgets link to the internet or your smartphone to share data and conduct a variety of operations between your device and the network.

Wearables Apps have access to the device’s hardware, which includes sensors, receivers, and other components. They gather data from hardware and, with the help of the network to which they are attached. Then they use it further to generate the desired output. The output is usually provided or shown by the device itself.

Even though these little gadgets have a lot of useful functions, developing wearable applications is difficult. We’ll go through some of the common challenges that wearable app developers are currently dealing with in their solutions.

1. Building the Use Case

Begin by composing a list of questions that are pertinent to the wearable set. This will assist you in discovering the finest solutions and available wearable hardware, such as APIs/SDKs, development frameworks/platforms, and other successful mobile app development methods.

Every developer faces three fundamental challenges: what, when, and why. The concept and design process will be simple to begin after these three W’s have been addressed.

Address the three W’s first, as it will be much easier to go on to conceptualization and design after that. Though it appears to be a bit difficult, it is an essential phase in the procedure. Also, the app should have some unique features rather than being a carbon copy of another existing iOS or Android app.

Another problem in wearable app development is to create a wearable app for each platform or all platforms. There are also several technologies and APIs available on the market, such as Android, Salesforce, and Apple. As a result, it’s critical to select the appropriate platform based on the requirements.

Although there are many versions for different devices and platforms, end consumers will prefer to have a single app that works with all of them and responds quickly. Select the API that is best suitable to the apps of your niche. To be successful, an application must overcome the most significant barrier to the wearable revolution: app compatibility.

Wearable electronics, including phones and tablets, have a lower screen size. This also entails a new user interface. So it makes UX design for a wearable application is a difficult task for developers. Several elements must be taken into account during the process, including display size variations, icon compatibility and size, platform support, and a variety of other features.

Wearables with smaller screens necessitate a different type of user engagement, necessitating a different development strategy. Fast and seamless interaction, speech-focused instructions, and passive data collecting approaches must all be prioritized by app developers. In addition, the wearable usually does not have enough room or requirement for flashy icons or detailed navigation.

The first and most important thing to accomplish is to avoid fragmentation. Avoid using a native platform because it will limit your reach. Make your app available on a variety of platforms so that you can reach out to a wider audience. Cross-platform compatibility not only reduces fragmentation but also increases revenue.

Wearable technology is still in its early stages of development, thus security problems are to be expected. Since wearable tech devices cannot connect to the Internet on their own, they require various synchronization or third-party tools or functions to connect with mobile apps on Internet-enabled devices. Every day, a large number of wearable apps fall victim to data privacy breaches. As a result, wearable app development companies must pay special attention to the issue of privacy throughout the process.

Customers are retained, communication is improved, and long-term relationships are ensured with a secure wearable gadget. Wearable app developers must consider effective security methods to increase user confidence. Advanced security mechanisms that protect sensitive data should be included in the apps. To optimize the entire experience, they could choose refined privacy settings and clear communication.

Also, regular security updates should be applied to the application. Experts in this industry make speedy, successful, and effective adjustments every other day. In this case, the app should keep up with the latest technology and trends.

Most wearables are connected gadgets, not freestanding devices, due to their limited functionality and smaller screens. They rely on other larger devices to access all of an application’s functionality. Then, if the tablets or smartphones to which they are attached have a low battery or just cease working, they become nearly worthless.

Developers must address this problem until technology advances to the point where wearables can work independently. They should also consider the implications of a depleted smartphone battery when a wearable exits the Bluetooth range.

“Ease of use and mobility” is the primary goal and challenge of every Wearable app. Developers have to ensure the functionality of wearable technology is easy to use by new users.

Before creation, the most important stage is to include a feature-rich collection of capabilities and functionalities that will bring value to end-users. Developers must be able to comprehend and implement the needs of users.

One of the most important aspects of every smart device is battery usage and memory. Users are always on the lookout for applications that use less power and memory. It also increases the likelihood of an app being removed, as no one likes to keep updating their apps. Wearable gadgets have small batteries, which causes battery concerns, especially for those with small sizes.

The solution is to develop an app that consumes energy in a balanced manner. Make a wearable app that is straightforward, which means removing any extraneous features. So, while developing a wearable application, the developer should customize the code so that it consumes less memory and battery power, and thus performs better.

Users are searching for mobile solutions that are focused on them, and organizations are looking for more efficient solutions. One of the most important metrics for determining the success of a wearable app is its performance, which can only be achieved through thorough testing. As a result, don’t even consider skipping the quality assurance procedure. But have you ever considered what might happen if a connected gadget with wearables suddenly stopped working? There will be a lapse in inefficiency as a result of this.

Always remember that before releasing an app for a wearable device, it should go through extensive testing to ensure that it has all of the necessary capabilities and is compatible with other devices.

Wearable application development is difficult, time-consuming, and gratifying. Because the features and functionalities of each app vary, the wearable app development process necessitates extra caution. These are also some of the increasing challenges that each app developer faces when creating wearable apps. Developers must be ready as platforms and devices change.

Terasol Technologies has an experienced wearable app development consulting team that is adept at adopting new technologies, staying current, and delivering the needed results as per the client’s objectives.

Want to work with us? Want us to help you build your business? Get in touch.

How to make an API call in Svelte