In the last chapter, we introduced the basic concept of Bazel. In this blog, I would like to talk about the file structure of Bazel.

Before we introduce the file structure, we need to understand several key concepts and terminology in Bazel.

These concepts, and terminology, are composed to Build File, which Bazel will analyze, and execute.

The basic relationship among these concepts looks like this 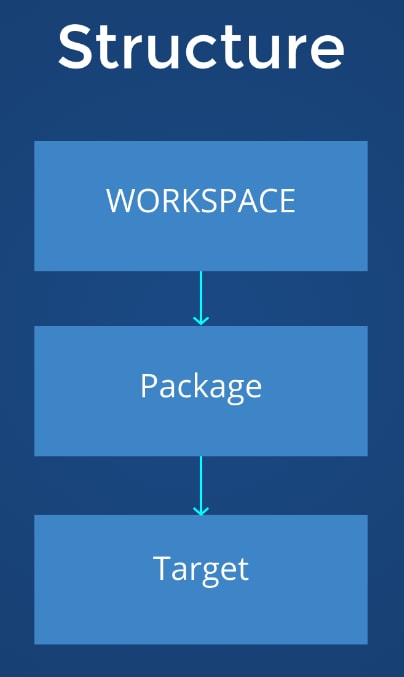 , we will discuss the details one by one.

A "workspace" refers to the directories, which contain

And the Bazel definition is in a file named WORKSPACE, or WORKSPACE.bazel at the root of the project directory. NOTE, one project can only have one WORKSPACE definition file.

Here is an example of the WORKSPACE file.

In a WORKSPACE file, we should

Once WORKSPACE is ready, application developers don't really need to touch this file.

It is important to know how to split a project into package. It should be easy for the users to develop/test/share the unit of a package. If the unit is too big, the package has to be rebuilt on every package file change. If the unit is too small, it will be very hard to maintain and share. So, this is not an issue of Bazel. It is a general problem of project management.

In Bazel, every package will have a BUILD.bazel file, containing all of the build/test/bundle target definitions.

For example, here is a 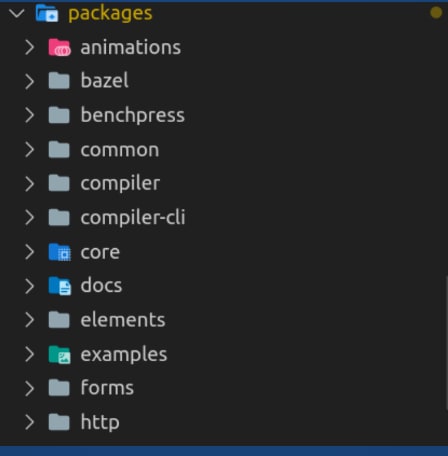 of the Angular structure. Every directory under packages directory is a package of code organization, and also the build organization of Bazel.

Let's take a look at the file structure of gulpjs in Angular, so we can have a better understanding about the difference between Bazel and gulpjs.

Here is a Bazel Package directory structure in Angular repo. 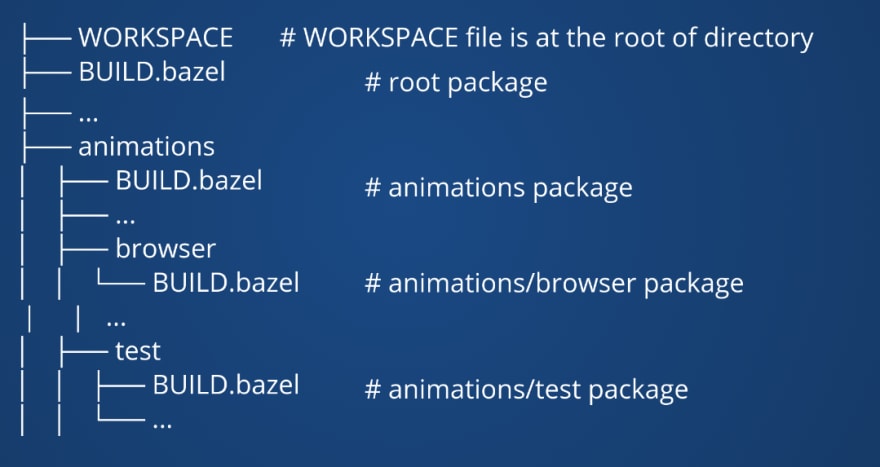 Before we talk about target, let's take a look at the content of a BUILD.bazel file.

The language of the BUILD.bazel file is Starlark.

So Starlark is a very very simple language, and only supports very limited Python syntax.

The BUILD.bazel file contains build targets. Those targets are the definitions of the build, test, and bundle work we want to achieve.

The build target can represent:

The target can also depend on other targets

Here, ts_library is a rule imported from @npm_bazel_typescript workspace, and ts_library(name = "lib") is a target. The name is lib, and this target defines the metadata for compiling the lib.ts with ts_library rule.

Every target has a unique name called label. For example, if the BUILD.bazel file above is under /lib directory, then the label of the target is

The label is composed of several parts.

Most of the times, the name of the workspace can be omitted, so the label above can also be expressed as //lib:lib.

NOTE: The label for the target needs to be unique in the workspace.

We can also define the visibility to define whether the rule inside this package can be used by other packages.

The visibility can be:

And if the rules in one package can be accessed from the other package, we can use load to import them. For example:

Here, we import the ts_library rule from the Bazel typescript package.

The rule is just like a function or macro. It can accept named parameters as options. Just like in the previous post, calling a rule will not execute an action. It is just metadata. Bazel will decide what to do.

So here, we use the ts_library rule to define a target, and the name is lib. The srcs is lib.ts in the same directory. The visibility is public, so this target can be accessed from the other packages.

It is very important to follow the naming convention when you want to create your own rule.

Here, we use the data attribute. The data will only be used at runtime.It will not be analyzed by Bazel at build time.

So, in this blog, we introduced the basic Bazel structure concepts. In the next blog, we will introduce how to query Bazel targets.

How to manage multiple remote repositories with git (terminal)