I’ve always been fascinated with the idea of web application development. Building web apps was one of the reasons I wanted to learn how to code.
This fascination led me down many paths, from Java to JavaScript to Angular and now to React.

One of the things that is good to know is hooks in React and specifically useContext() hook which makes using contexts in react a lot easier.

Hooks are functions that let you “hook into” React state and lifecycle features from function components. Hooks don’t work inside classes — they let you use React state and other features via functions, without classes

Let’s forget the hype around React and focus on what this post should do for you. My primary hope for this article is that it equips you to understand and work with React
useContext hook effectively.

Let's take a closer look at,

What and Why of React's Context API

Context provides a way to pass data through the component tree without having to pass props down manually at every level.

In any typical react based application, data is passed from parent to child using props 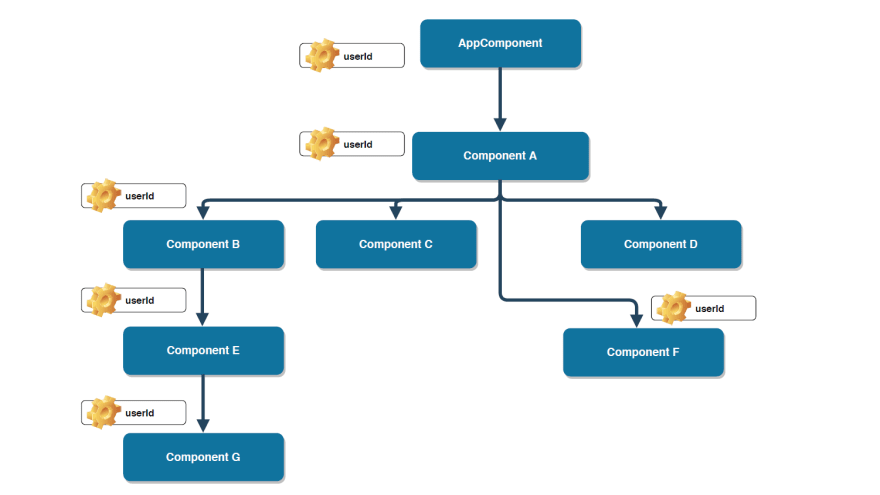 Suppose, we have a requirement to display logged in User's ID inside Component G and F which is maintained as a property inside AppComponent.

To successfully able to display the userID in Component G and F, using traditional React approach, we will have to pass the property information all the way down
the Component tree as a prop.

So for Component G to display the userId, the prop has to be passed through Component A, B and E.

As you might have already noticed, even though components A, B, and E has do not need the userId prop, they still have to act as a mediator to pass the prop down to their children.

In typical real-world applications, components may be nested up to 5 or 10 levels deep. Cluttering those components is definitely not a good web development practice.

So to overcome such cross-cutting concerns so that data can be sent directly to the required component without the hassle of sending it through the tree, the team at react has released a new set of APIs called Context API in React v16.3.0.

Using Contexts Before the Introduction of Hooks

To use context before the release of hooks, we usually implemented it by following these 3 steps:

Using Contexts After the Introduction of Hooks. It's a cleaner way of using contexts in React than Context APIs

Now, as you have seen using Context API, makes the creation of context quite easier. However, we still needs to use Context.Consumer to consume the context value.

As you might think, having multiple contexts, going to difficult consuming those values.

In such scenarios, React's useContext() hook comes handy as it makes consumption of Context values a lot easier and clean.

There are 3 simple steps to consume context using useContext() hook: