See? Everything is a bunch of little things put together. Where it gets really interesting, however, is when we start looking at how those little pieces function under the surfaceâ€Š–â€Šthat is to say, all of the different ways that they can be used to build larger abstractions.

Last week, we learned about tree data structures, which are usually abstracted away but are important pieces of how larger thingsâ€Š–â€Šlike the file system on our computersâ€Š–â€Šactually work under the hood. There are a few different types of tree structures that are used in programming, but the most common (and, arguably, the most powerful) one is a binary search tree.

Binary search trees, sometimes abbreviated as BSTs, are tree data structures that adhere to a set of very specific rules. Just from their name, you might already be able to guess what those rules are. The reason these trees are so powerful and end up being so useful is because of these specific rules. But, before we gush over binary search trees any further, let's dig a little deeper into what they are, and what makes them different from any other tree out there!

Two trees within a tree

We're already familiar with the term binary since we've talked about it in the context of the binary (or base 2) number system. However, binary also has a simpler meaning: anything relating to or composed of two things. In the context of trees, this might seem a little odd at first. A tree can only have one single rootâ€Š–â€Šthat's one of its defining characteristics! So how does one tree become two? How does a tree become…binary, exactly?

In order to understand what puts the “binary” in binary search tree, we have to think back to one other characteristic of the tree data structure: recursiveness. Trees are recursive data structures, which means that a single tree is made up of many others.

The recursive characteristic of a tree is crucial to how a binary search actually functions (not to mention, one of the reasons that it is so powerful). 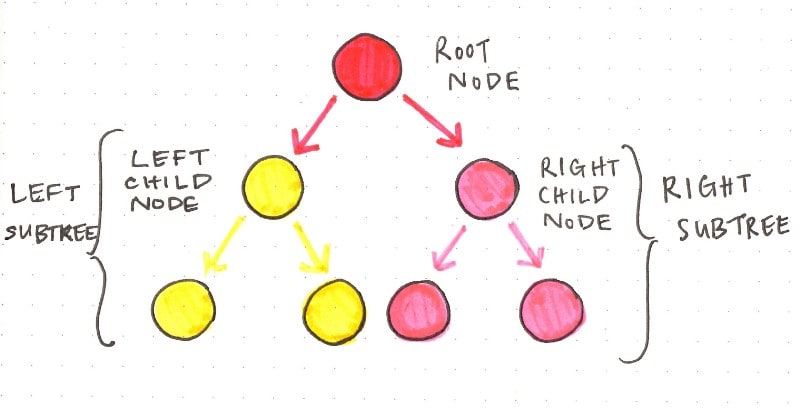 The recursive aspect of a binary search tree is part of what makes it so powerful. The very fact that we know that one single BST can be split up and evenly divided into mini-trees within it will come in handy later when we start traversing down the tree!

But first, let's take a look at one more important rule that makes binary trees so special.

If we look at this ordering not just in theory but actually in practice, a pattern starts to reveal itself. All of the subtrees to the left of a node will always be smaller in value than the subtrees to the right of a nodeâ€Š–â€Šand of course, because of the recursive nature of trees, this applies not just to the main overarching tree structure, but to every single nested subtree as well. 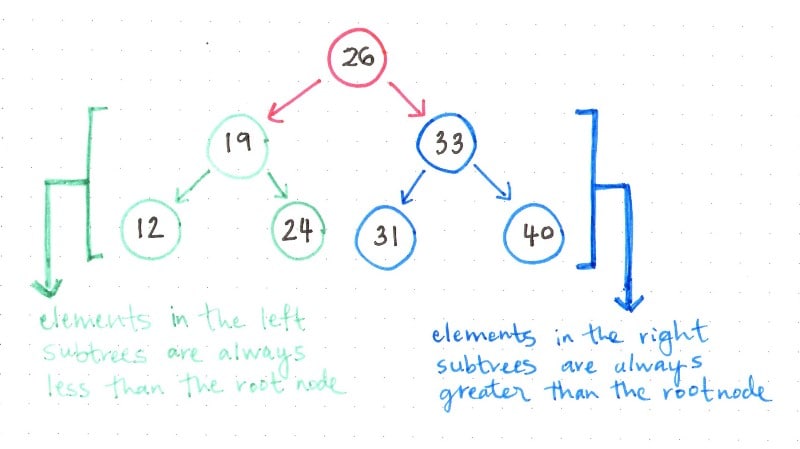 In the example tree above, all of the nodes to the left of the root node, which has a value of 26, are smaller than 26. But, if we look at the green subtree on the left, we'll notice that even though 24 is smaller than 26, it is still bigger than 19, and so it goes to the right of the node 19.

Any tree can be a binary tree if each node has only two child nodes. It's the ordering of nodes that makes a binary tree searchable and, by extension, what makes it so powerful.

The explicit ordering of nodes is what makes a binary search tree so easy to, well, search. And this plays into all of the basic operations one might want to perform on a tree, too. For example, let's say we wanted to perform an insert() operation, which we would expect to be able to take a value and insert it into the correct position in the tree.

We can pseudocode an insert() function pretty easily simply because of the rules of ordering of a BST:

Half the elements and twice the fun

Hold upâ€Š–â€Šwhat even is a binary search? Well, we already started dipping our toes into binary searches in the process of pseudo-coding that insert function earlier.

A binary search is an algorithm that simplifies and speeds up searching through a sorted collection by dividing the search set into two groups and comparing an element to one that is larger or smaller than the one you're looking for.

That definition is a mouthful, but it's actually a lot simpler to understand and grasp by looking at it in action. So, let's make it easier on ourselves with a drawing! We'll work with the same binary search tree from earlier, which had a root node of 26; instead of tree format though, let's reorganize it into a linear structure, like an array, to make it a little easier to look at. 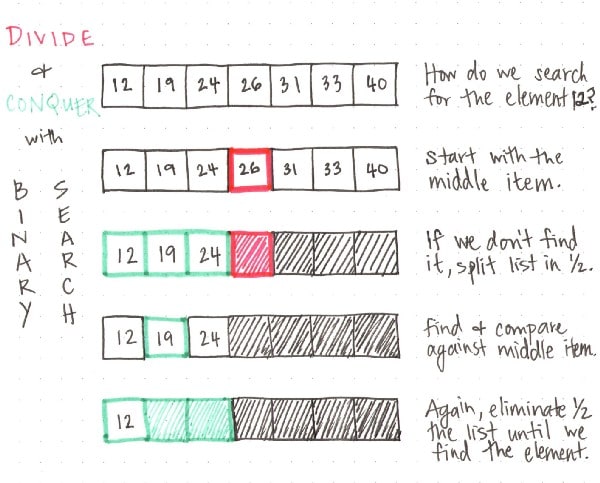 Here we have 7 elements (nodes), and we want to find just one: 12. In most situations, we wouldn't be able to easily see the values of all of our node, but in this example, I wrote them all out so that it's easier to understand.

Okayâ€Š–â€Šso how can we search for the node with a value of 12?

Well, we already know that our elements are all sorted by size. So let's leverage that. We'll start from the middle element, which is 26. Is 26 smaller or larger than the number we're looking for? Well, it's definitely larger. Which means we can be 100% certain that nothing to the right of this middle element could be home to the element that we're looking for, 12. So, we can eliminate everything to the right of our array here.

Okay, so we have 3 elements to look through now! Let's choose the middle of those, which happens to be 19. Is it bigger or smaller than 12? Definitely bigger; so we can eliminate everything to the right of this node, since we know it'll be too big to be the right number.

Alright, one more number to remains, and that's the one we'll check! And of course, it's the node we've been looking for: 12! Success!

If we take a look at this example again, we'll notice that with each check and comparison that we do, we actually eliminate** half** _of the remaining elements_that we need to check. Think about that for a second.

In the process of narrowing down the search set, we also remove half of the search space. That's enormously powerfulâ€Š–â€Šand that's exactly what makes binary searches so powerful.

This algorithm is incredibly powerful when you think about the fact that we can have tons of nodes in a tree, but not have to search through all of them (the way that we would have to if we were searching through all of these elements one by one, or in a linear search). A binary search is far more efficient if our data is ordered and sorted so that we can easily cut our search space in two.

Hopefully, by seeing a binary search in action, you can start to see where it gets its name fromâ€Š–â€Šand why it is so perfectly named! We can search through a huge dataset, but be much smarter about it by dividing our search space in half with each comparison that we make.

Abstractions are at their best when you can wrap your head around when they are used and why they are so important and what makes them so useful. Which begs the question: when on earth do binary searches and binary search trees actually get used in the larger world of computer science?

Well, the answer is: in a lot of places! To be a little more precise in my answer: in databases, for one. If you've ever seen the term t-tree or b-tree in when working with a database, these are both types of binary tree data structures. But waitâ€Š–â€Šit gets better! A database uses indexing to search for the correct row to retrieve and return. How does it search or the correct index? You guessed it: by using binary search!

However, binary searches and binary search trees aren't just used in a lower level context; some of us have probably already interacted with them directly.

If you've ever been working on a project and realized that, somewhere along the way, you introduced a bug or broke a test, you might already be familiar with the awesome git command that is git bisect. According to the git documentation, this command lets you tell git to search through a list of all of your commits:

How does this magic even work!? Through the beauty of a binary search tree, of course! 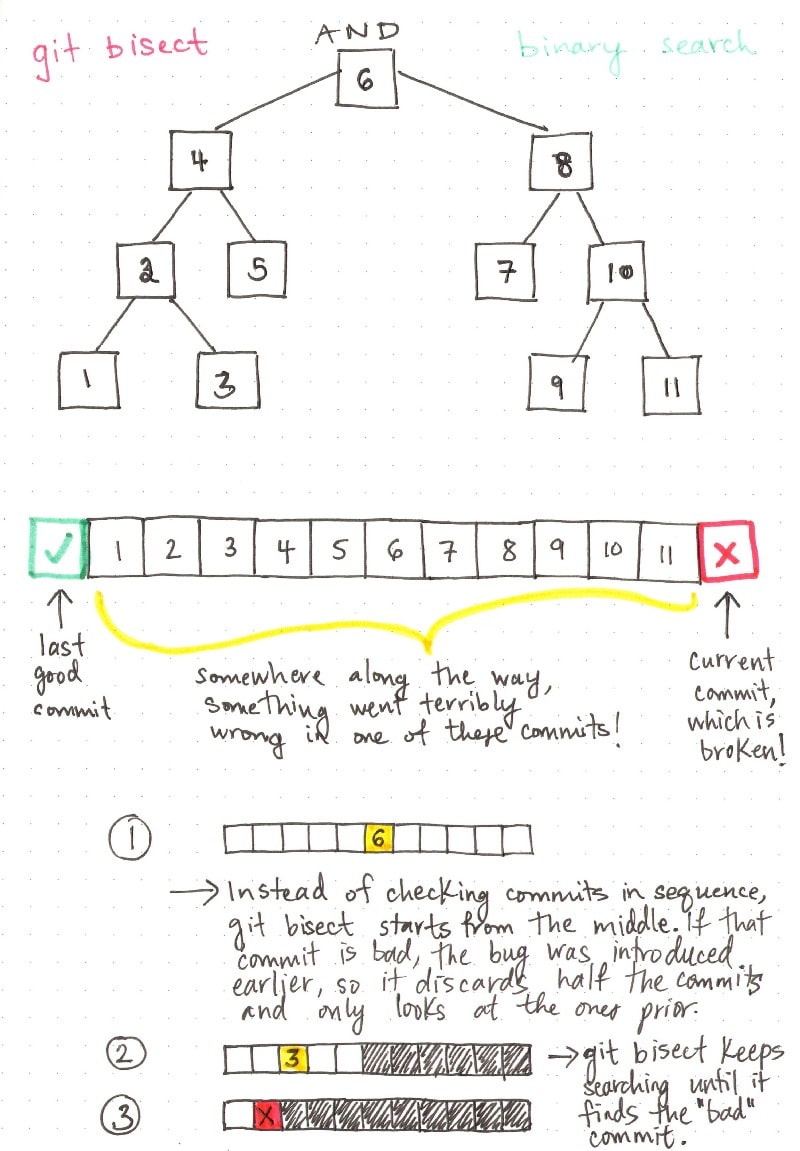 By telling git when the last “good” commit was, it searches through all of the commits from then to now. But it doesn't search chronologically of courseâ€Š–â€Šinstead, it starts from the middle commit, and if you confirm that the middle commit is also “bad”, then it will continue to the earlier commits before that one, and discard all the commits afterwards. It conducts a binary search, exactly like the ones that we've been dealing with today!

Amazing, right? Who knew that so many of us were using such a simple concept to debug things on such a high level?! I don't know about you, but I, for one, am convinced: we're all better off when we leaf the traversing up to the binary search trees.