Well, folks, it looks like it’s going to be a while before we need to think about packing strategies, standing on physical stages, or managing afterparty politics. That doesn’t mean that we don’t have some things to consider!

I’m currently attending an online conference, and I have several more scheduled, and this is just how we’re going to be doing it for a while. Here are some considerations for giving talks online. 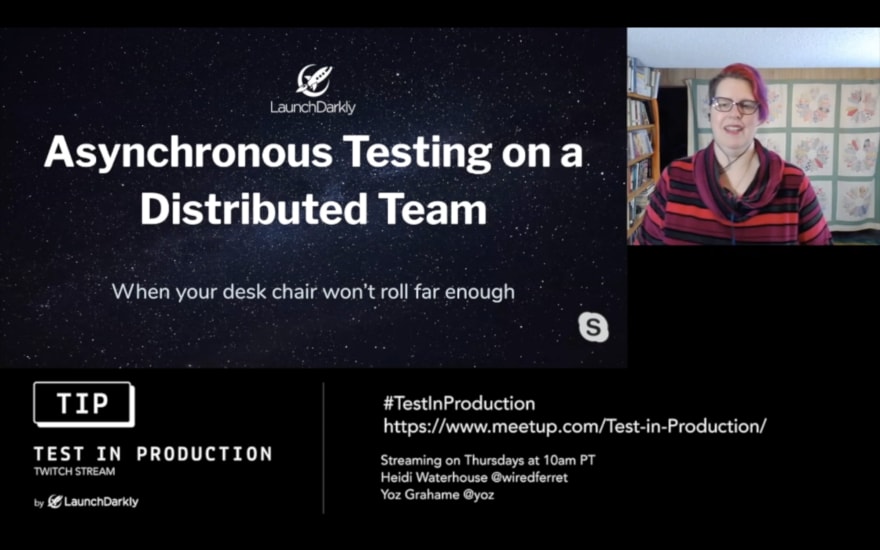 An early webinar. Since then I’ve bought some more lights and photo backdrops.

This category is about the world around the focus of your webcam. 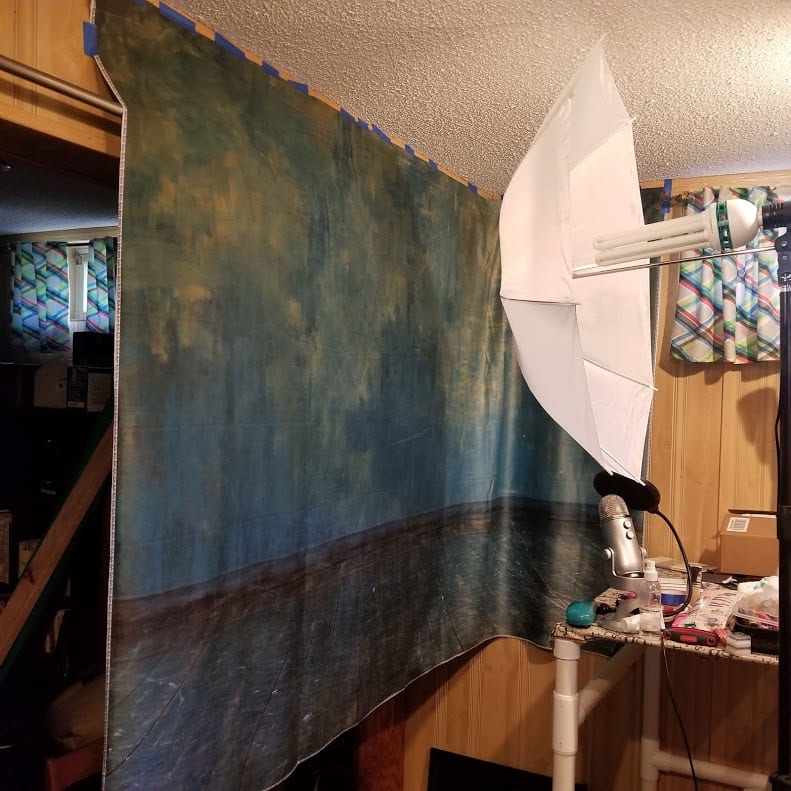 What a recording looks like behind the scenes – photo backdrop, external mic with pop filter, light and diffuser umbrella

There is some stuff you need to do before you get on camera.

We are all in charge of getting people to register or show up for our stream, or whatever you’re using to get eyeballs. Be an active part of the promotion. Tweet about it, post about it on LinkedIn, mention it to the friends in your non-work tech slack, send email to people who might be particularly interested in the topic. I find this really difficult, to download fancy graphics-laden pictures of myself and post them on my own social media, but it’s an important part of the implicit contract of public speaking. Whoever is running this event is counting on getting as many people as possible, and your network is part of that expectation.

Use whatever software you are going to use on the day you broadcast/record. Be aware that sometimes different software gets “grabby” about your peripherals, so you may want to test out a routine of what you do to set up after a reboot. Call a friend or the conference organizer to do a dry run to make sure that all of your tech is working the way it’s supposed to, so you don’t have to worry about it and neither do they. Clever conference organizers will set this up as part of you doing the talk.

This is a problem I hadn’t thought of until I started doing more webinars. The slides that we design to be projected on a big screen are not quite what we need for something that may end up taking up a sixth of a screen, after all the add-ons get added on and people scoot the window over to make room to see their notifications. Here are some things to consider:

As I write this, it’s the end of a long cold winter, and we have been asked to shelter in place, and although I am normally pale, I have reached “possibly translucent” levels of pale. We look how we look, and that’s mostly ok, but there is a reason everyone on TV is wearing makeup, and it’s because cameras don’t pick things up the same as the human eye. Cameras are hungry for contrasts and tend to not be very nuanced about very fine shade differences. This is true even for the high-end 4k webcams everyone is buying (WHY?). If your lighting washes you out, it doesn’t seem like it would matter, but it does, because the whole reason we’re putting our faces out there is so people feel engaged and not like they’re “being taught”. We want to see human expressions, to see the wry quirk of the lips or the raised eyebrows. To that end, here is my not-at-all-a-makeup-pro opinion on what matters for lady webconference speakers*, or anyone who is willing to give it a try:

Also! Don’t wear fine stripes. Cameras also struggle with that and the trippy distractingness is not worthwhile. If you’re using a backdrop, try not to wear anything that matches it. This is why greenscreen green is not a color weatherpeople even own.

Otherwise, most of my previous advice holds true. Wear something that you feel comfortable and professional in. Make sure it’s not something you’re going to adjust or fidget with. This webinar is about your professional expertise, not your dress style, so don’t freak out. 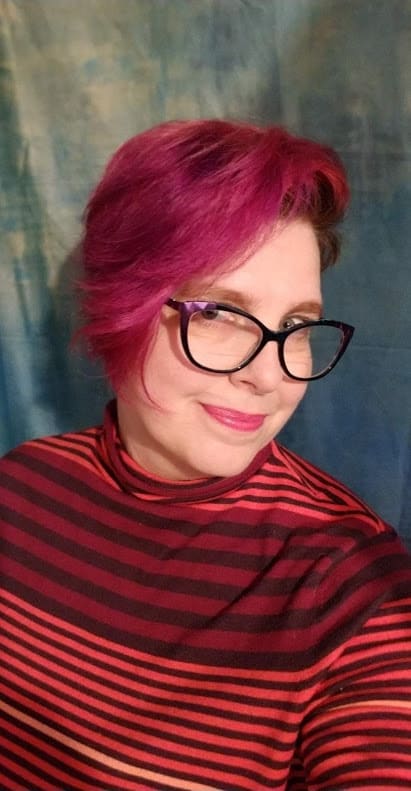 Just because you’re at home and standing in front of your own camera and wearing fuzzy pajama pants doesn’t mean that you get out of practicing. Run through the whole talk with your webcam recording. Then do whatever you need to do to get yourself in a place where you can watch it. You may know what you look like on stage, but you may not know what you look like when you’re on webcam. Hand gestures that make sense in a larger space may look too dramatic, or you may find out that your eyes wander around the screen distractingly. I know it’s so hard to watch this, but friends, you gotta. You just have to, if you want to get better at this particular style of speaking. I’m sorry it sucks.

It’s really easy and common to get locked in on watching yourself on camera watching yourself. That recursion is not very entertaining from the viewer side, but it’s hard to avoid. If I can, I turn off the window showing myself. I also have a small stuffed critter that sits on top of my webcam so I can make eye contact, even if it’s with googly eyes. Some people have also just glued eyes to their camera. (If you’re a person who hates eye contact, ignore this part). Having something other than the screen to look at makes it easier to remember to deliver your talk, not watch yourself delivering your talk.

So you’re all set, you’ve checked everything, you’re online, and it’s go-time. What do you need to pay attention to now?

Remember that you’re not on stage. You’re effectively arms-length away from the people you’re talking to. You can use the more subtle stuff — head tilts, finger movements, eyebrows. You’re not reaching the back of a hall, and if you emote like you are, you’re going to feel sort of like the ShamWow guy trying to give a technical conversation.

Similarly, you don’t need to shout or project. Practice with the microphone until you can get it to be comfortable with your normal speaking voice to a little bit louder. If you’re wearing headphones, this may be easier to judge, since a good mic won’t pick up all the ambient noise that you can hear around you.

Some of my DevRel friends have taken to using their phones as teleprompters, or having a script up on the screen as they give their talk. I’ve never been a hugely scripted talk person, but honestly, you usually can’t tell who has written out every word and who hasn’t. Do whatever makes it possible for you to give the best talk possible, but do be mindful that people are probably “close” enough to track your eye movement, so keep the words big or the columns narrow so it doesn’t look like you’re scanning across your whole giant screen.

It’s really easy to breathlessly rush through a webinar, because there’s no way to see the people in the audience looking confused or needing a breather to think. I wouldn’t advise you to talk slowly, but do remember to give people a moment or two to process what you’re saying, especially if it’s a major point. Take a drink of water, take a deep breath. You’re going to have to project the audience in your mind to be kind to them. And if you haven’t had a lot of live audience experience before now, watch a couple videos of professional speakers or Ted talks and note that not only is there silence, the pauses seem to add meaning.

After your talk is over, you still need to do some work.

* Honestly, more masculine-presenting folks, it’s not bad advice for you, either. I’m not saying CRIMSON LIPSTICK, but it’s not a bad time to try out tinted lipgloss from Burt’s Bees or a little bit of concealer, or trimming your beard. Remember the part about being recorded?

A version of this article was previously published by SitePro.