Colored hair has never disrupted my ability to do my highly-visible, public job, either.

Almost every form of dress code you can think of is about asymetrical respect – the less powerful person is forced to comply with power’s standards of hair/clothing/expression. https://t.co/yB5RGz9JpD

Unless I’m about to give a talk or just gave one, in which case I look more like this: 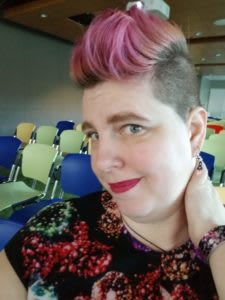 As you can see from the tweet above, a lot of people agree with me that dress codes are frequently to remind people they don’t have power, or they have less power. The pushback against sexist school dress codes is an aspect of that — maybe we shouldn’t police girls because of what they wear, maybe we should teach boys that they should keep their assumptions about what they’re entitled to to themselves. Similarly, a great thing about working in tech, especially in startups, is that they seldom have very rigid codes. That is part of why there’s a statistical lump of genderqueer-presenting people in tech, because there’s not really a reason to haul someone in front of HR for dress code violations… if there is a dress code. Or HR.

Some dress codes are practical. Cover your hair and beard with a net if you work with food. Don’t wear loose clothing around rotating machinery.

Some are arbitrary. I don’t think leggings are pants, but I am An Old, and will own that. The color of your hair does not impede your ability to execute emergency deplaning procedures*. Your facial piercings don’t actually make you a worse childcare provider.

I’m having a discussion at work right now about clothes, because they matter. I don’t think it’s ok to impose arbitrary rules on people who don’t see customers, but I do think that professionalism in any office means that you don’t smell bad, I can’t see any of your swimsuit parts, and none of your clothing constitutes a threat to other humans. I do think it’s ok, and even important, to dress in a way that makes other people take you seriously if you’re talking to customers.

For example, my company is based in Oakland. This is like being based in San Francisco, but with fewer microclimates. Rolling up to work in a company hoodie, jeans, a t-shirt from your last company, and a pair of Tevas is A-OK. But the further east you go, the more formal everyone’s business wear gets. Jeans turn into chinos somewhere around the Mississippi, and then into actualfacts slacks. T-shirts become button-down plaid, and then long-sleeve with ties. Hoodies to sweaters to blazers. And I’m using dude-presenting clothes as an example, because they are so much less complex than women’s clothes. And then, and then, you jump the pond. I showed up for an onsite in France, and pretty much every single male developer – the developers, was wearing an ironed shirt and a fine-gauge wool or cashmere long-sleeve sweater.

Because I travel so much, I see this over and over again, and I’m uniquely sensitized to it. Also, it’s a class thing. Never let anyone tell you America doesn’t have class issues. We do, we just managed to get really bad at talking about them or naming them. So, for instance, someone raised upper-middle class on the east coast will never think about the fact that they pack button-down shirts for a trip to New York, because that’s their native language. They learned to tie a necktie in junior high.

Someone who wasn’t raised that way is likely to pack the same thing they wear to a conference on the west coast, and that will end up being the wrong formality register. And the thing is, people won’t say anything about the fact that to them, you look like a scruffy nerfherder who couldn’t Enterprise your way out of a paper bag. They may not even realize they’re thinking that. But they will feel, subtly, that your company may not be Ready For The Big Leagues.

So what can we do about this? Well, I’m pushing for all employees who do customer-facing work to have a couple different branded options, like a sweater. That will make me feel happier when I go back to Europe and can leave my hoodie in my travel bag.

For you? If you’re going to a conference, find a crowd shot of the people at that conference last year, and dress to fit that. There’s a wrinkle to that, because every conference/programming language has its own particular flavor, but you’ll get pretty close. For example, here are crowd shots from O’Reilly Software Architecture and O’Reilly Velocity. Both were in New York City. If you look closely, you’ll see that the people at Velocity are dressed down a bit more, because it’s more for the DevOps people, and Software Architecture is more for their bosses. It’s a subtle difference, but it exists. 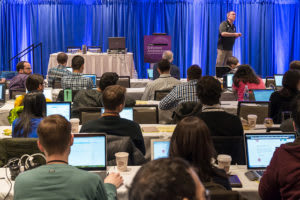 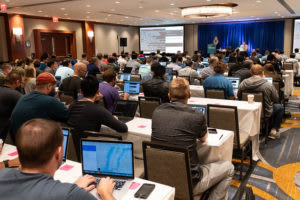 For comparison, here are pictures from the London version and the San Jose version 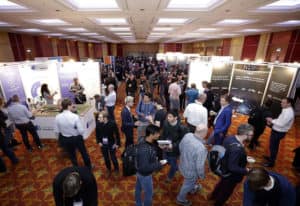 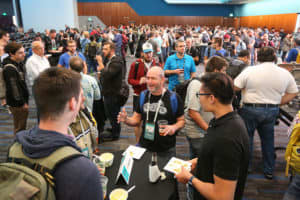 And for even more complexity, femme women will usually, but not always, dress one degree more formally than the male and butch-identifying people at a conference. So you end up with speaker pictures like this: 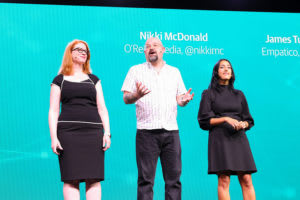 They all look appropriate for the stage, but the women have their phones offstage somewhere (Unless Ines’ dress is more magical than I think), and he has his in his front pocket. I have a whole thing about gendered dressing, which I won’t go into, because this post is long enough, but you should be aware of it when you’re deciding what to wear.

I’m not picking on O’Reilly, they just keep all their pictures in an easy-to-find place.

If someone tells you that your hair, your body, or your style is a problem for them, that’s on them. If they say it’s a problem for the company you work for, try to figure out if it’s a health and safety issue, a customer-facing issue, or a power play.

Personally, I decided a while ago that if someone didn’t want to hire me because of my pink hair, they also would not like my swearing, my public queerness, or my twitter feed, and we would all be happier if I didn’t work there. But that’s a position of enormous privilege, and I know it.

If you feel like you need to say something to a co-worker about their clothes, style, or god forbid, hair, before you open your mouth, ask yourself if this is about your discomfort or an actual business problem. **

* At this point in culture, airline cabin crew are caught in a terrible intersection of class-policing and trying to have authority in the moment they need it over panicking people, and it’s complicated, but a huge number of cabin crew have admired my hair and sighed wistfully over being able to choose a “non-natural color”.

** If you are mentoring someone entering the industry, you get a little more leeway to point out the norms of the particular office you’re in, IF you’re their mentor. Someone has to tell the interns that Teva sandals may be ok, but not if they’re stinky.

Where do you find conference CFPs?

Why Built-In Admin Templates Are Preferred Over Custom Designed Templates?

Who's responsible for securing software?