Replies for: Yeah, as someone who recently left Brooklyn so I could afford a house (not SF, but not too far behind lol) I'm really looking forward to that aspec...

Yechiel Kalmenson
Yechiel Kalmenson
He/Him/His I'm a Software Engineer and a teacher. There's no feeling quite like the one you get when you watch someone's eyes light up learning something they didn't know.
• May 22 '20 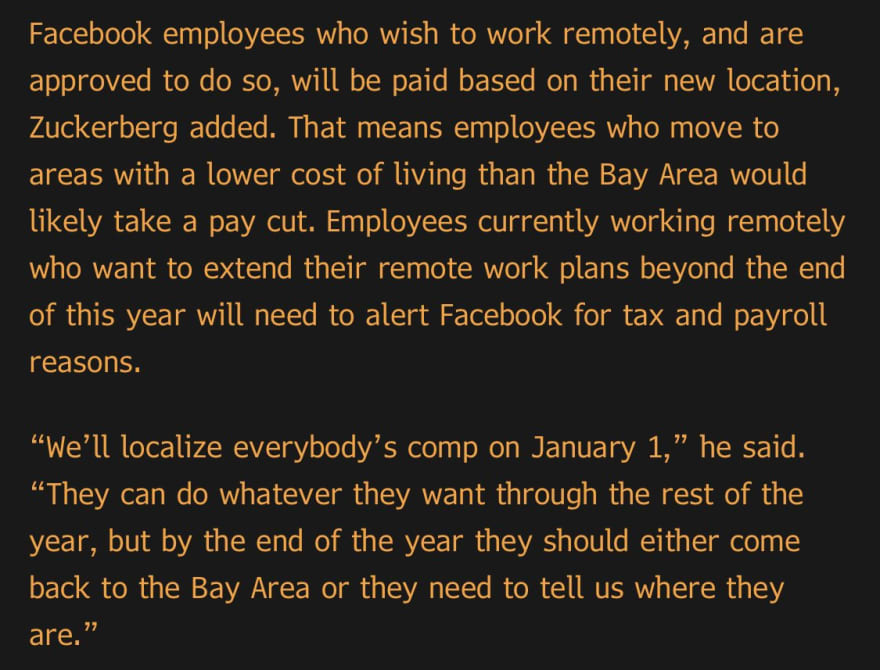 Right ... just one thing I was wondering about:

Does Facebook already have offices & employees outside of the USA, like for instance in India? If that's the case then it's safe to predict that the employees in (let's say) the India based offices receive lower wages (on average) than the ones in the Bay Area ... there's no way that they would be paying the same salary, because frankly it wouldn't make sense.

(not because the India devs or employees are in whichever way "less" than their US counterparts, but simply because of the huge gap with regards to cost of living)

In other words, I don't know if we should really be as "shocked" by this as we may think we should be ... this policy (or planned policy) might very well just be common sense.

I think its shocking because of the circumstances. We're in a global pandemic where lots of people went back to their parents houses and left NYC or the bay for what they thought would be temporary. Now its looking like this will be a while and Facebook is saying "we're cutting your pay unless you move back to SF even if its not safe".

I think the "shocking" part is that, by being remote, you're saving them money. It's significantly cheaper to furnish bandwidth than to rent/buy office-space, furnish it, climate-control it, clean it, etc.

And the whole "but where you're living is cheaper" thing is a crock to start with. I mean, as it stands, people working in the same building (in the same position) get paid based on their skills and experience, not on whether they live in an expensive part of town or commute 60mi each way so they can live someplace cheap. HR doesn't look at my ZIPcode and my teammate's ZIPcode and say "I'm giving you a CoL bump and I'm giving your teammate a CoL ding".

You've partially convinced me, however if FB's office is in an area (county, even state) where rent and other prices are totally through the roof, not in one zip code but virtually anywhere, then they HAVE to pay higher salaries don't they? Or people will simply be unable to make ends meet, no matter which city, town or neighborhood they live.

Apart from this "exceptional" scenario I would tend to say your logic is right.

What if they would give people a "base salary", which would be the same no matter locality or on site/remote, and which would be based on job title and years of experience and so on (so "merit based"), and on top of that people can get "subsidized" to cover specific costs (which they will have to prove by showing bills and so on) ?

That might be the basis for a more fair and transparent system of remuneration. I think that would be the way forward - whatever approach a company chooses, make it fair and make it transparent.

Yes you're absolutely right, the circumstances (COVID-19) make this very very shocking indeed - telling people "you need to come back to the office or you get a pay cut". But what about the news then recently that both Facebook and Twitter will allow their employees to WFH permanently?

At one point in time, Facebook (and others) decided "the value of the <POSITIONS> is worth $X/year compensation-outlay". If they weren't, they could have made the decision to move locations to where they could source for less. This strikes me as opportunistic. It also strikes me as a harbinger of a future where, "we now only want to pay $Y/year for your position: you probably want to move to someplace cheaper if you want to retain your earnings:CoL ratio" (and, ultimately, a harbinger of "we're just going to offshore since <FOREIGN MARKET>'s rates are significantly cheaper than even the lowest CoL-adjusted salary within this state/region/country would allow for").

Ultimately, it sort of strikes me as "double dipping" on such companies' parts: reduce the costs associated with facilitating workers' ability to produce (especially given that the costs of corporate facilities are likely going to have to go up to reflect newly-identified spacing, cleaning, HVAC and other requirements) and reduce the raw amount you're paying said workers ...all while retaining the full value of a given employee's output.

That they didn't previously simply outsource things says that there's (at least up to this decision-point) an intrinsic value to having workers within a given cultural-, language- or time-region doing the work. If so, the fair thing is to pay for the value of those factors.

Overall, if a company thinks that where an employee lives or works from changes the value of what they produce, then they should probably only hire employees that meet the associated cost/value relationship.

I mean lots of companies already pay low enough that employees need two jobs to make ends meet. In this case I'm assuming its just someone at Facebook decided to apply the usual Cost of Living calculation to remote workers. It seems like a cost saving measure for facebook. Ad spending is way down so they're trying to save.

Which is fine. But be honest with me. Don't try to claim it's "fair" to cut my compensation simply because I moved — especially if me no longer sucking up cube-space already saves you money. Tell me "we need to either cut everyone's compensation or start laying people off because the income-landscape has changed and we're facing losses". Of course, such honesty also means that, for "fairness" sake, C-suite occupants and shareholders should be similarly-facing cuts.