I’m excited to share a new project with you. It’s called Digamo and it’s a macOS app built for people who have, or should have, 1:1 meetings at work.

Digamo is a collaboration with my dear friend, podcast co-host, and occasional boss, Nicole Sanchez. It’s something we’ve been thinking about doing for years. Back in April, we decided to go for it.

What the research said

Before diving headlong into development on a project we were both excited to build, though, I asked Nicole to conduct some user research. We had some strong convictions already:

We still believe these things. But if we were going to invest the energy and effort needed to produce a whole software product, I wanted more information from the sort of people we wanted to serve.

Nicole gamely conducted interviews with people managers, digging into their processes for communication and how they managed the many meetings and conversations that were essential to their daily work. One theme emerged clearly:

Many managers had an enormous Google Doc they were using to keep track of… everything. The text was monstrous and unstructured. Things often got lost over the longer term.

This was an opportunity we hadn’t considered, but it fit into our goals well: software could also structure the information that emerged from these conversations. This would make it possible to slice, filter, search and summarize that information at a later date. In addition to training managers on good communication, and encouraging that communication, we could also provide value by capturing and summarizing outcomes.

This insight was a North Star that guided our product development, and we share it eagerly with you. People are drowning in information. Help them organize it better, you’ll make a better workplace.

At first, we weren’t sure how eager people would be for yet another piece of software at work. We started with the goal of reaching an alpha that would run on an iPhone, sync with your work calendar, and help you prepare for meetings.

The idea here was that we could meet our users in their spare time, relieving their anxiety about upcoming meetings by providing a clear structure for the sorts of things you do before and after sitting down. You might have some decisions that you want to make sure are made by those in attendance. We suggested warmup activities to build rapport between attendees. How will you know the meeting was successful?

We prompted the user to think about, and write down, responses for all of these and more. A neat party trick was that the output was nicely formatted into an agenda you could email.

There was just one problem: the iPhone was a bad fit for these tasks. No one wanted to look at their phone in the middle of a meeting, and prepping for meetings just isn’t the sort of casual task anyone is eager to do with their thumbs.

And we were about to have company.

When competitors join the scene, it’s Silicon Valley tradition to smile fixedly and announce how excited you are to see them validate the market. There’s some truth to this posturing, though: it’s encouraging to see others converge on a conclusion you’ve reached on your own. Maybe the timing is right for your idea.

We took the validation to mean we could dispense with the idea of building this as an iPhone toy. We would proceed as though the world was ready for another piece of workplace software.

Still, no amount of business aphorisms would change that we were now approaching a problem alongside teams that were bigger and better-capitalized than we were. Moving to a desktop format would help our project be taken seriously, but we were still outgunned.

For our vision to have a future, we would need to chart an unconventional course. As the sole engineer on the project, it was my job to make things work while keeping things lean. If people were going to use this on the job, it had to be sturdy and reliable. And we had to ship quickly, with competition around the corner. These are interesting constraints to manage when your developer bus factor is one.

What are the decisions only we would make?

As outsiders, Nicole and I had little hope of raising money for this project without showing significant progress, so that ruled out bringing on more engineers. Without a larger crew, I didn’t feel confident in using web technology for something so mission critical. I’d be tied to my keyboard indefinitely, protecting the infrastructure that kept the product alive.

So we tried something different: decentralizing our software entirely. Our approach turned to a native macOS application that would host and maintain all its own data.

Because we weren’t starting with non-negotiable hyper growth as a requirement, this old-fashioned approach would be viable for us. The more we explored it, the better it fit our values. By designing our project without a centralized server infrastructure, we could guarantee that no one else surveilled your usage of it. This was important because we wanted our users to be real about the thorny communication issues they encountered at work. We wanted them to trust our product the way they would their own physical notebook.

I’ve seen complex, misconfigured workplace software that leaks sensitive details like a sieve. It’s a privacy nightmare. Our approach sidestepped all of that.

We also got some practical benefits: the application could run locally without needing to package an entire web browser under the hood, so the binary size is just 20 MB. The native code is also efficient. Even with a large data set, it doesn’t seem to need more than 50-100 MB of system RAM. So, as a bonus, we got a minimal resource footprint and the ability to run without an internet connection thanks to building a native desktop app.

For object graph maintenance and persistence, the app uses Apple’s Core Data framework. Ten years after my first Core Data projects, I’m impressed with how much easier it is to work with these days. The framework still has a meaningful learning curve and I’d be bullshitting you if I said I grasped all its complexities. Nonetheless, I found it a straightforward way to maintain all of Digamo’s relationships and generate the user-specified queries needed for summarizing data.

As a long time iOS developer, I have to take a moment to gush about Cocoa Bindings. They make UI development so fast and easy. With the advent of SwiftUI, they may be destined for sunset. I’m glad I finally got a chance to use them, after years of envy from afar.

We still ended up with a lightweight server to provide automatic updates, delivered by the excellent Sparkle Project. This is just good practice if you’re distributing outside the App Store, but it’s also essential for a beta. Our users will always have access to the latest features if they opt-in to these updates. Still, the server could go down for a weekend and no one’s work would be interrupted.

Meanwhile, Nicole’s work in the field was yielding some interesting feedback.

In her capacity as an expert in organizational design and workplace culture, Nicole spends a lot of time training leaders in the basics of good management. She had this slide: 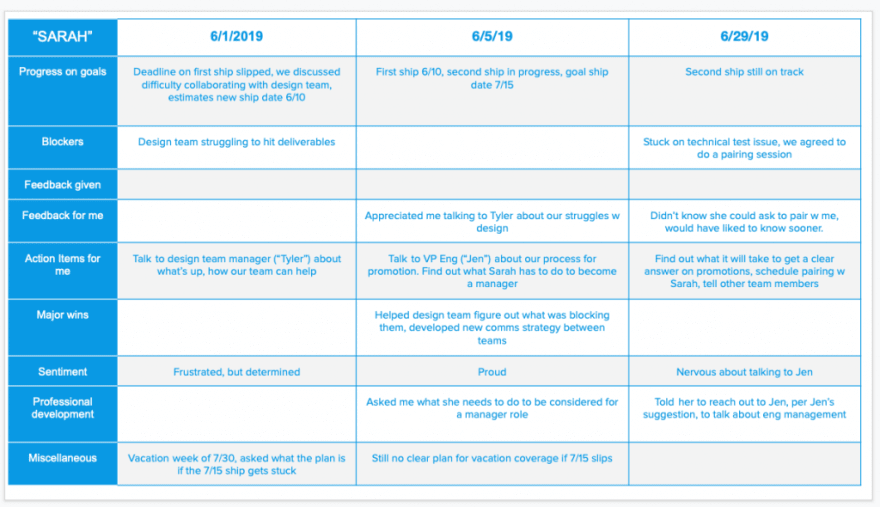 People were grasping at it more than anything else in her trainings. Just a simple spreadsheet, but it offered so much clarity about how to consistently do 1:1 meetings. Weeks after their first introduction, people were still using spreadsheet as part of their ongoing work.

We had our product. 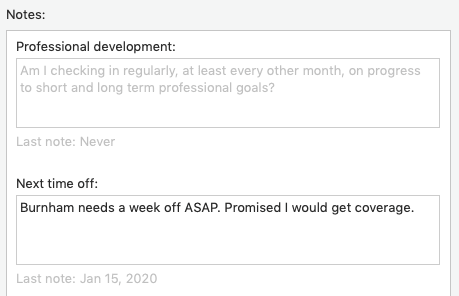 From there, we dumped the complexity of calendar syncing and meeting prep. Our laser focus was one thing: supporting 1:1 meetings. Setting expectations for the topics people should cover, helping them keep track of how often they discuss things like feedback, professional goals, time off, major wins, and more—not to mention helping our users dig up those discussion notes later on.

Nicole’s spreadsheet also asked people to keep track of sentiment, and we worked together to find a structure for this fuzzy data so that we could surface it in the UI.

Each teammate gets their own emoji timeline, showing the progression of their sentiments over time. We can also give you a bird’s-eye view of sentiment across your team at any given moment, as the teammate selector list view displays a summary of the most recent entry. That view also flags any teammates who have been neglected in your 1:1 meetings, always showing people with meetings furthest in the past at the top of the list. 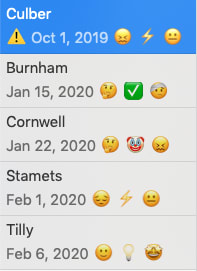 Emojis are subjective, so it’s possible to set your own preferences for them, too. 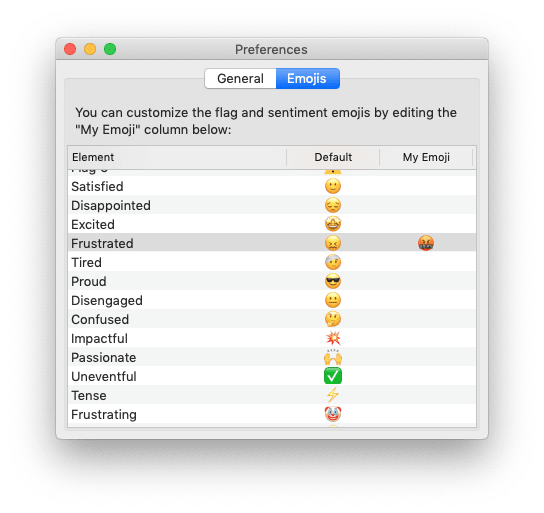 With all this data structured, it’s easy to retrieve later on. Just choose a teammate, a time frame, and the notes you care about, and Digamo will generate a summary. We can also do the same with your whole team. We know how much work performance review season can be. We’re excited to see how this feature helps streamline those processes, reminding you of the full picture of your team’s challenges and accomplishments. 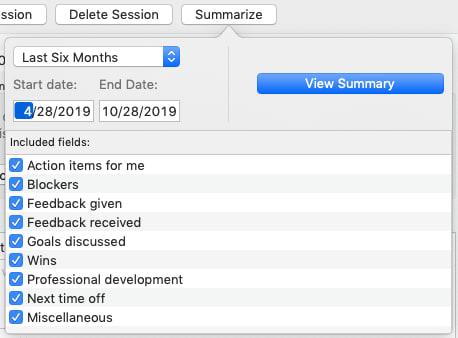 So that’s Digamo. It’s your private, digital notebook for recording 1:1 meetings. Thanks to the Vaya Consulting team, and especially our friend Dr. Nick Bedo, for the support in getting this out the door. 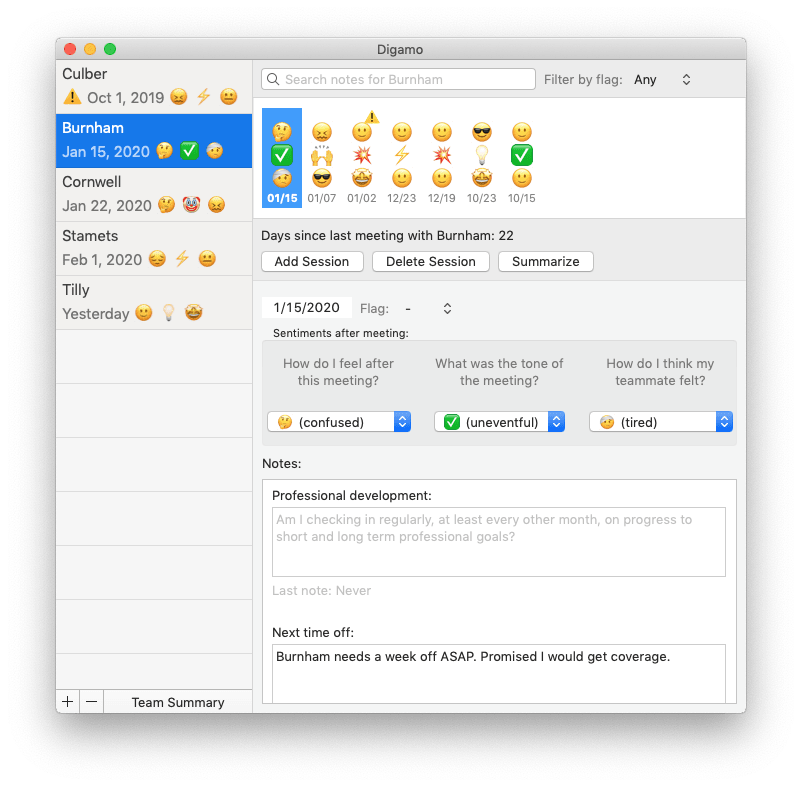 Hidden in the product are a handful of deliberate bias mitigation strategies:

There’s so much more we want to do with Digamo, but it’s time to get it out into the world. High on the list are things like automated backups, sync with other devices, and a return of calendar sync. We’ll get there. Meanwhile, we’ve got the start of something a lot of folks have been asking us for. We hope the structure and conveniences provided by this initial beta will be helpful in your daily work.

While a lot of the people we know use a Mac, we know a macOS app doesn’t cover the full spectrum of people who need this product. We’ll be thinking about how to deliver this more broadly in the future.