DEV Community is a community of 582,189 amazing developers

RT-Thread was born in 2006, it is an open-source, neutral, and community-based real-time operating system (RTOS). 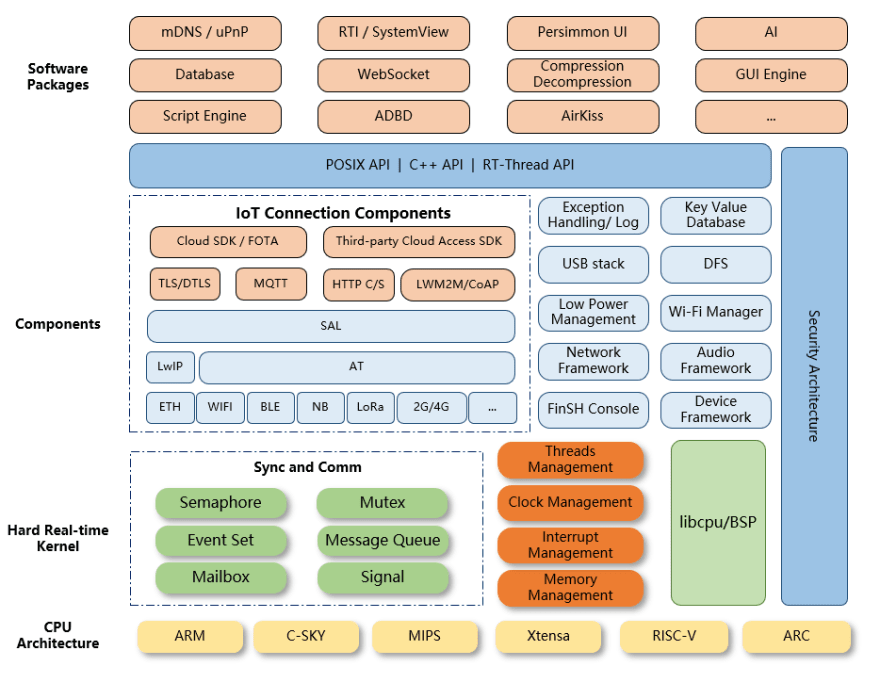 Components and Service Layer: Components are based on upper-level software on top of the RT-Thread kernel, such as virtual file systems, FinSH command-line interfaces, network frameworks, device frameworks, and more. Its modular design allows for high internal cohesion inside the components and low coupling between components.

RT-Thread Software Package: A general-purpose software component running on the RT-Thread IoT operating system platform for different application areas, consisting of description information, source code, or library files. RT-Thread provides an open package platform with officially available or developer-supplied packages that provide developers with a choice of reusable packages that are an important part of the RT-Thread ecosystem. The package ecosystem is critical to the choice of an operating system because these packages are highly reusable and modular, making it easy for application developers to build the system they want in the shortest amount of time. RT-Thread supports more than 200 software packages.

Real-time system (RTOS) is increasingly widely used in the high-end Internet of Things (like AIoT) because of its low cost, high real-time, and fast start-up characteristics, soon or later, more and more RTOSs would support multi-kernel SMP, AI, audio & video and this is inevitable. In the near future, RT-Thread Studio IDE, next-generation microkernel architecture, AI frameworks and more will all be released step by step.

This is a new world of RTOS.

Abby
This account is set to share everything new about OpenSource RT-Thread IoTOS.
Do you remember your first DIY project created with STM32 Blue Pill Board?
#opensource #discuss
An Easy-to-use Network Gadgets Contains Ping, NTP, TFTP, Iperf, and more!
#opensource
Embedded AI Learning Diary1: How to Deploy the AI Model on the Embedded Platform?
#opensource #ai